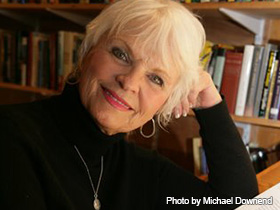 Poet and novelist Karen Blomain was a professor at Keystone College,Wilkes University, and Kutztown University who taught and lectured around the world.

Poet and novelist Karen Blomain was born in Scranton, Pennsylvania. She held an MFA in Creative Writing from Columbia University, and went on to become a professional writer and university professor. She gave lectures and presentations around the world, and was the author of The Slap (1990), Normal Ave. (1998), Hard Bargain (2009) and other works.

Karen Blomain was born was born in 1944 to Thomas Kielty Blomain and Lucille Watkins Blomain in Scranton, Pennsylvania. She spent her early years in Archbald, where four generations of her family lived. Blomain completed her undergraduate degree at Marywood College in Scranton, her Master's degree in English at the University of Scranton, and her MFA in creative writing at Columbia University. She married Michael Downend, a writer and photographer, and they had nine children (from previous marriages).

Blomain was first published in the Carleton Miscellany of 1980. Urged by a friend to submit her work for publication, Blomain said that she would "never forget that the feeling of holding that first publication in [her] hand." When asked what themes she focused on in her work, Blomain answered that "I do some bio-regional writing. I write about women, aging, family life, issues of abuse of power, politics, and things I see out of the corner of my eye." Furthermore, Blomain described being a poet as a chance to refine and formulate the world view. Although she admired many poets, she explained that the American poet William Stafford meant the most to her as a writer and served as a great influence with his democratization of language. Blomain explained that the goal of her own poetry was "to supply that aha moment when the reader might come upon an image or phrase or idea and get that sense of connection."

Beyond poetry, Blomain also wrote essays, novels, short stories, and book reviews. Her novel A Trick of Light (2002) encompasses a variety of themes, including bigamy and women's issues. The premise follows an interesting plot line—after the husband dies, his wife discovers that he had also taken a second wife and had been deceiving both women. This novel explores the understanding that develops between the two women whose lives have been unexpectedly intertwined.

Her poetry collection Hard Bargain (2009) focuses on her travels to Mexico, Russia, and Ireland, where she had spent time living and working, as well as themes of aging and family matters.

The play, An American Wife, which she co-authored with her husband, premiered at the Equity theatre company's Northeast Theatre in downtown Scranton in 2007 to sold-out audiences. The play takes place at the end of WWI when an American G.I. returns to his coal town home with a Polish bride, seeking love and acceptance from his Irish American family.

Blomain served as a professor at Keystone College, Wilkes University, and Kutztown University. She presented readings, lectures, and workshops in a variety of settings, both across the US and in France, Austria, and Russia. She was also the co-founder and board member of the Mulberry Poets and Writers Association. She also created collage, assemblage, and altered book visual art pieces under the name Karin Blomen (the Swedish spelling of her name).

Her novels A Trick of Light (2000) and The Season of Lost Children (2011) are part of an unfinished trilogy.

Karen Blomain died on August 15, 2012, in her daughter's home in Union Dale, Pennsylvania, according to her obituary in Legacy.