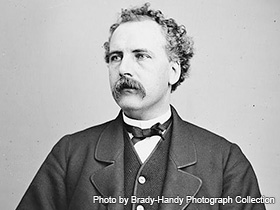 George Henry Boker was born in Philadelphia, Pennsylvania, on October 6, 1823. Boker's major works included plays such as Calaynos (1848), The Betrothal (1850), Anne Boleyn (1850), and Leonor de Guzman (1853). In addition, his books and poems included Plays and Poems (1856), Poems of the War (1864), Konigsmark (1869), and The Book of the Dead (1882). Boker became president of the Union League of Philadelphia, founded in 1862. In addition to devoting his time to literature, he was involved in boxing and dance. Toward the end of Boker's career, he was appointed to a position on the Fairmont Park Commission until his death on January 2, 1890, from heart disease.

George Henry Boker was born in Philadelphia, Pennsylvania, on October 6, 1823. He was the son of a Philadelphia banker, Charles Boker. Boker was said to be brought up in an atmosphere of "ease and refinement." He received his early schooling in private schools and then attended Princeton University, graduating in 1842. While attending Princeton, he was one of the founders of the Nassau Monthly, which is now called the Nassau Lit. The Nassau Lit is the country's second oldest college literary magazine. Boker contributed numerous poems and essays in the magazine's earliest days and later published two volumes of poetry and wrote 11 plays. During this time Boker was able to devote his time to literature, as well as boxing and dancing. Two years after graduation, Boker married Washingtonian Julia Mandeville Riggs. At this time, Boker also abandoned his plans to become a lawyer and decided to pursue writing. Charles Godfrey Leland, a relative of Boker, recounted, "As a mere schoolboy, Boker's knowledge of poetry was remarkable. I can remember that he, even at nine years of age, manifested that wonderful gift that caused him many years later to be characterized by some great actor, I think it was Forrest, as the best reader in America." Boker was not only recognized as having a great writing gift by his relatives, but also by his professors and other poets as well.

Boker's first book of verse, The Lesson of Life, and Other Poems, which was published in 1848, did not become a big hit due to another highly successful blank verse tragedy set in medieval Spain that was published the same year. The next three books of poetry that he authored were Poems of the War (1864), Konigsmark (1869), and The Book of the Dead (1882). In addition to his poetry Boker also wrote plays, which included Calaynos (1848), Anne Boleyn (1850), Leonor de Guzman (1853), and Francesca da Rimini (1855).

Boker's first play, Calaynos, was a tragedy known for its depiction of the racial issues between the Spanish and the Moors. This play attracted audiences in London, Chicago, Baltimore, and Albany. It portrays a detailed story of a wife who is seduced by her husband's devious friend, who exposes that Calaynos has Moorish ancestry. During this time of writing his plays, Boker was determining, himself, the difference between poetic and dramatic style. Boker is best remembered for his last play, Francesca da Rimini, which is a verse tragedy based on the story of Paolo and Francesca from the fifth canto of Dante's Inferno. According to critic Paul D. Voelker, this is to be known as Boker's "masterpiece," which some scholars rate as the "best nineteenth-century American play."

During the time of the American Civil War, Boker turned his writing to the Union Cause, which changed him poetically from a Democrat to a strong Republican. In addition, Boker's name is interwoven with the rehabilitation of the Republican Party in Philadelphia. Following this change also came his volume Poems of War, which was issued in 1864. In the 1860s, Boker started off as secretary and then became the president of the Union League Club. Through this organization, Boker and his coworkers raised money for the war effort and encouraged enlistments in the army. Still concentrating on his poetry, in 1869 Boker wrote Konigsmark, The Legend of the Hounds and Other Poems. Following this book, Boker returned to Philadelphia from abroad.

When Boker returned home, Philadelphia welcomed him with open arms. He was appointed a seat on the Fairmont Park Commission where he remained an active participant in the beautification of Philadelphia's city parks until his death on January 2, 1890, from heart disease.