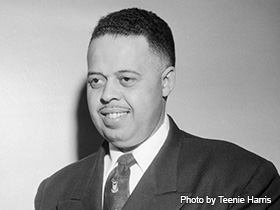 Franklin "Frank" Bolden was born December 24, 1912, in Washington, PA. After attending the University of Pittsburgh, Bolden joined the staff of the Pittsburgh Courier, one of the leading Black newspapers in the nation. He broke barriers as a war correspondent during World War II, when he reported from the China-Burma-India theater. After the war, he returned to the Courier, covering such diverse topics as music, culture, politics, and policing. Bolden also served for several years as city editor. After leaving the Courier, Bolden worked for nearly two decades for the Pittsburgh Board of Education. Bolden died on August 28, 2003, in Pittsburgh.

Franklin “Frank” Eugene Bolden, Jr., was born on December 24, 1912, in Washington, Pennsylvania, to Mary and Frank E. Bolden, Sr. The oldest of three sons, Frank Jr. had a trailblazing role model in his own home, as his father was the city of Washington’s first Black mail carrier.

Bolden took up the title of trailblazer himself throughout his life, beginning as a young man. In 1930, he enrolled at the University of Pittsburgh, first studying law, then settling on biology. He became the first Black member of the school’s marching band, playing the clarinet. During his time at the university, he met other notable Pittsburgh figures including actor Regis Toomey and entertainer Gene Kelly; he and a friend even gave Kelly tap-dancing lessons. As a student, Bolden had his first brush with journalism while working as a freelance sportswriter for the Pittsburgh Courier, one of the leading Black newspapers in the nation. However, it was only after his other career hopes were dashed — he was turned down by the University of Pittsburgh’s medical school and denied a job as a public school teacher on the basis of race — that he returned to the newspaper business. He once again took a job at the Courier, working as a general assignment reporter and features writer.

While journalism was not Bolden’s first choice, it became his passion. A famously loquacious man, he wrote with distinctive flavor, employing turns of phrase like “'from the pot liquor flats to the scotch-and-soda highlands' -- references to the Lower Hill and the more affluent Upper Hill,” neighborhoods in Pittsburgh’s predominantly Black Hill District (Rouvalis). His beat included the Hill’s Wylie Avenue, where he frequented the “upholstered sewers” (his term for the Hill’s small music clubs), interviewing everyone from musicians and baseball players to gamblers and sex workers. He also engaged in historical research, tracing the roots of locally prominent Black families.

With the outbreak of the Second World War, Bolden took on a new role. He was one of the first two Black World War II correspondents accredited by the War Department, a position that took him from stateside training camps to the jungles of southeast Asia. He filed his stories with the National Negro Publishers Association, which distributed them to Black newspapers across the nation. During his time reporting from the China-Burma-India theater, Bolden met and interviewed the famous and the infamous, from Mahatma Gandhi and Jawaharlal Nehru to Franklin Delano Roosevelt, Winston Churchill, Joseph Stalin, and Chiang Kai-Shek. In addition to covering the events of the war, Bolden was particularly interested in the experiences of Black soldiers. He reported on their mistreatment by white officers and their miserable conditions, and he relayed tales of patriotism, heroism, and resilience. Writing at the end of the war, Bolden said of his experience, "On my magic carpet, I have traveled half-way 'round the world, seeing, talking, and living with 'GI Joe.' The best that I can say about him, and in a language which he understands so well, is 'Joe, you're one helluva guy!'" (Bolden, “A Last Goodbye to GI Joe”).

When Bolden returned from the war in September 1945, he turned down offers from national publications to come back to Pittsburgh and the Courier. He again worked as a features writer, covering diverse topics ranging from music and culture to politics and policing. In 1956, he became city editor, a position he held until 1960. As editor, he worked to create opportunities within his community, advocating the promotion of Black police officers in the Hill District and starting the Junior Courier, an insert authored and edited by Pittsburgh high school students. In 1960, Bolden married Nancy Travis, who worked for decades as a Pittsburgh school social worker. Bolden left the Courier in 1962 for short stints at The New York Times, NBC radio, and NBC-TV, where he joined The Huntley-Brinkley Report. He returned to Pittsburgh in 1964 to serve as assistant director of information and community relations for the Pittsburgh Board of Education, a post he held for 17 years.

Bolden’s later life was marked by recognition of his many contributions and an ongoing commitment to his community. The University of Pittsburgh recognized him as a Distinguished Alumni Fellow in 1998, and he served on the University of Pittsburgh Alumni Association Board. Local, regional, and national groups celebrated his pioneering work in journalism, including the Pittsburgh Black Media Federation and the National Association of Black Journalists. In 1983, The Pittsburgh Black Media Foundation established the annual Frank Bolden Urban Multimedia Workshop to encourage young writers to pursue careers in journalism. Bolden also served on the African American advisory committee of the Historical Society of Western Pennsylvania, and he volunteered with Cerebral Palsy Institute, Family Services of Western Pennsylvania, and the Early Learning Institute.