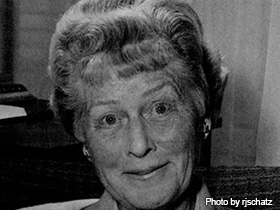 Mary Fanning Wickham Bond was born in 1898 into a well-to-do family in Chestnut Hill, Philadelphia. In the early 1950s she wrote her first bestseller, Device and Desire: a Novel of Bad Manners. While an accomplished writer, she is also known for her second marriage to James Bond, the namesake of the famous spy character. Bond passed away in 1997.

Mary Fanning Wickham Bond was born on June 8, 1898, the daughter of Samuel and Maria Porcher. Her father Samuel made a good living as the chief purchasing agent for the Pennsylvania Railroad. She was born into a life of privilege and was educated at a local private school. As a youth, she enjoyed such pastimes as horseback riding and attending debutante balls. Although born into this lifestyle, she never felt it dictated her behavior. Much to her father's dismay, her first job was selling at Wanamaker's. She was accepted to Bryn Mawr College around the time of World War I but chose instead to be an emergency aide, someone who volunteered as a nurse or air raid warden.

Her first marriage was in 1930 to a man by the name of Shippen Lewis, a prominent lawyer in the region. This marriage lasted until 1952, when Lewis died. Two years later she married a man whose name would inspire one of the most wellknown fictional characters in history: James Bond.

Author of spy novels, Ian Fleming, read James Bond's book Birds of the West Indies and gave his international spy the name James Bond. What was to Mary Bond the "dullest name in the world" would become one of the most wellknown, much to the chagrin of the real life James Bond and his wife. She didn't mind the attention much during the day, but her husband would get calls at 2 and 3 a.m. from women looking for James Bond. She would answer these calls irritably, saying "Yes, James is here, but this is Pussy Galore and he's busy now." Eventually, she set a meeting up between her husband and Ian Fleming, which led to them becoming friends and also inspired her 1966 book How 007 Got His Name (1966).

Bond's writing career actually began in the 1920s and, although none of her seven novels were published, she did receive the Philadelphia Browning Society's gold medal in 1926 for her sonnet entitled "The Gift." She took a hiatus from writing novels but continued to write poetry, magazine articles, and short stories. Then, in the 1940s she found inspiration at a local library in the form of a book titled Unusual and Eccentric Wills. The book was about a rich Viennese man who left nine of his relatives $25,000 but with one condition: they all had to stay away from his funeral. The real twist was that anyone who did show up would receive his entire fortune. Bond transplanted this story into 1950s Philadelphia, and it resulted in her bestseller: Device and Desire (1949).

In 1980, her book To James Bond with Love was published. In this book she chronicled her life married to James Bond. She accompanied her husband on his frequent trips to the Bahamas to gather information on birds. On one of these trips in February of 1964 they dropped in unannounced at Ian Fleming's Jamaica residence, an event she describes in comical detail. Apparently Mr. Fleming first thought that the Bonds may have dropped in unannounced to slap him with a libel suit for the theft of the name James Bond. This was not the case, and all went well with their meeting. Upon their departure, Fleming even presented them with a copy of his then latest novel, You Only Live Twice. On the fly cover Fleming had signed it "To the real James Bond, from the Thief of his Identity." The remainder of Bond's book describes their other adventures in the Caribbean, everything from traveling between islands on small boats and sleeping in less than desirable conditions, to how James proved through his work that birds in the West Indies originated in North America. She also wrote of these experiences in Far Afield in the Caribbean (1971).

Mary Bond released her autobiography Ninety Years At Home In Philadelphia in 1988. Just one year later, James died in February of 1989.

In 1997, Mary Bond died of congestive heart failure at the age of 99 in her home in the Chestnut Hill section of Philadelphia.