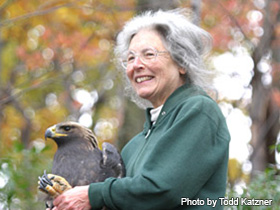 Marcia Bonta is a freelance writer based in Tyrone who has written books on nature, history, and touring.

Born in Camden, New Jersey, Marcia Bonta earned a BA from Bucknell University in Pennsylvania before becoming a freelance nature writer. She met her husband Bruce at Bucknell, and they both have lived near Tyrone, Pennsylvania, since 1971 on their 648 acre property known as "Plummer's Hollow." Marcia Bonta has written nine books, including her popular Outbound Journeys in Pennsylvania books and Appalachian series. She also wrote a column for the magazine Pennsylvania Game News entitled The Naturalist's Eye.

Marcia Myers Bonta was born in Camden, New Jersey, on July 11, 1940. She is the daughter of Harold and Leona Myers. Harold Myers was a chemical engineer whose passion for the outdoors rubbed off on Marcia. Her mother, Leona Myers, was a homemaker. Myers attended college at Bucknell University in central Pennsylvania where she earned a BA degree. She met her husband Bruce Bonta at Bucknell, and they were married on August 25, 1962. Together after college they moved around the country but returned to central Pennsylvania in 1971, where Bruce took a job as a reference librarian at Penn State University. They raised three children, Steven Christopher, David Jeffrey, and Mark Andrew, on a mountaintop farm in Tyrone, Pennsylvania.

Bonta started her career writing weekly columns for local newspapers before changing her medium to books, magazine articles, lectures, and slide shows on nature and natural history topics. Bonta chose to write in Pennsylvania because of the beauty of the area and the apparent lack of written works by naturalists about the state. She has written over 300 magazine articles and nine books, of which her more popular titles are her Outbound Journeys books and her Appalachian series.

In 1989, she won the Book of the Year Award from Pennsylvania Outdoor Writers Association for Outbound Journeys in Pennsylvania. She also served as the columnist of The Naturalist's Eye for the Pennsylvania Game News Magazine for several years. With an effort to recognize women in the naturalists fields, Bonta wrote Women in the Field: America's Pioneering Women Naturalists (1991) andAmerican Women Afield: Writings by Pioneering Women Naturalists (1995), which both include biographical entries and bibliographies for over 20 women.

Marcia Bonta and her husband Bruce have been known to give tours of Plummer's Hollow Private Nature Reserve, their 648 acre property near Tyrone. Giving these tours adds to her larger mission of teaching Pennsylvanians more about the nature around them.