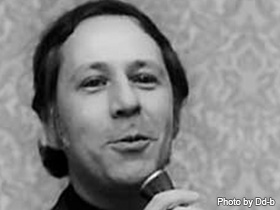 Science fiction master and essayist, Bova was born in Philadelphia.

Ben Bova, one of America's most prolific authors and public speakers, was born in Philadelphia in 1932. He has held positions in virtually every venue for writing: reporting for newspapers, editing articles for Omni, and writing numerous novels and nonfiction works. His work has garnered many awards and he is an oft-sought-after speaker.

Ben Bova was born in Philadelphia, Pennsylvania on November 8, 1932. He is the son of Benjamin Pasquale Bova, a tailor, and Giove Caporiccio Bova. Bova married Rosa Cuniotta on November 28, 1953, and had two children with her—Michael Francis and Regina Marie. In 1973, he divorced Cuniotta and was remarried to Barbara Berson Rose on June 28, 1974.

Bova earned his BS at Temple University in 1954 and went on to earn his MA at State University of New York at Albany in 1987. While growing up, Bova had a variety of interests such as fencing, anthropology, music, and astronomy. He first began writing fiction in the late 1940s while still a teenager and has continued writing throughout his life. Bova has also pursued careers in journalism, education, publishing, and the aerospace industry. While still in college, Bova began editing and reporting for the Upper Darby News in Pennsylvania until 1956. For the next two years, Bova became a technical editor on the Vanguard Project for Martin Aircraft Company in Baltimore, Maryland, the first American satellite program. In 1958, Bova was a screenwriter for Physical Science Study Committee for the Massachusetts Institute of Technology. For the next 11 years, Bova was the marketing manager for Avco-Everett Research Laboratory in Everett, MA, where he worked with leading scientists. Here, Bova studied many scientific advances in fields such as artificial hearts, high-power lasers, and electrical power generators. In 1971, Bova switched from a career in marketing to editing when he became the editor for Analog magazine in New York City and later became the editorial director and vice president for Omni magazine at Omni Publications International. He continued with this career until 1982, when he became the science and technology consultant for the CBS Morning News. At this time, Bova was also a member of the World Future Society.

Bova is the author of more than 90 futuristic novels and nonfiction books, along with a variety of articles, short stories, and periodicals. He has written scientific films, taught science fiction at Harvard University and Hayden Planetarium, was the past president of Science Fiction and Fantasy Writers of America, and is currently on the board of governors of the National Space Society. In addition, Bova has contributed writings to a variety of well-known magazines and newspapers such as Psychology Today, The New York Times, Penthouse, American Film, Modern Bride, The Naples Daily News, and The Wall Street Journal. Currently, he continues to write opinion pieces and reviews for USA Today, The Naples Daily News, and the Hartford Courant. Along with his writing contributions, Bova is a commentator on a variety of radio and television shows and lectures around the nation on topics such as science and politics, the craft of writing fiction, and biomedical discoveries that will help people live longer. In many of Bova's writings, he has predicted certain scientific advances, such as the Space Race of the 1960s, electronic books, video games, solar power satellites, the discovery of water on the Moon, and life on Mars. Some of Bova's most famous novels, such as Moonwar (1997),Moonrise(1996), Mars(1992), and Brothers(1995)combine his accurate scientific predictions with adventure and romance to produce fascinating stories of how the impact of future technologies will affect human beings and society as a whole. His nonfiction books, Immortality(1998) and Assured Survival (1984), discuss how modern technology can be used to solve some of our everyday problems in economics, politics, and society.

Throughout his careers in writing, editing, teaching, and researching science, Bova has received numerous awards and recognitions in the fields of science fiction, aerospace, and scientific technology. One of the most prestigious awards presented to Bova was the Science Fiction Achievement Award for Best Professional Editor, which he received six times while editor of Analog magazine. In 1974, he received the E.E. Smith Memorial Award for Imaginative Fiction. In the eighties, Bova received a stream of esteemed awards, such as the Balrog Award for Professional Achievement in 1983, the Inkpot Award for Outstanding Science Fiction in 1985, and in 1988, his book The Beauty of Light (1988) was voted Best Science Book of the year by the American Library Association. His short story, "Inspiration," (1994) was nominated for the Nebula Award in 1994. In addition, Bova has served on a variety of prestigious panels such as the Office of Technology Assessment (an advisory arm of the U.S. Congress), the British Interplanetary Society, the Planetary Society, the American Association for the Advancement of Sciences, the Nature Conservancy, the New York Academy of Sciences, and the National Space Club. As an alumnus of Temple University, he has been honored as a Distinguished Alumnus in 1981 and an Alumni Fellow in 1982. Bova has also worked with director George Lucas and producer and actor Woody Allen.

As of 2010, Bova has written over 115 books and in 2007 was asked by both Stuber/Parent Productions and Silver Pictures to assist with movies such asRepo Menand Altered Carbon. At the time of this writing, he lectures widely and continues to write books.