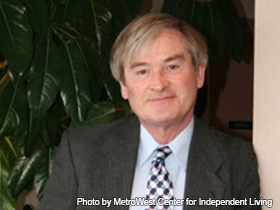 Frank Bowe, best known for his writings concerning Americans who have disabilities, was born in Danville in 1947.

Born in Danville, Pennsylvania, in 1947, Frank Bowe's work helped pave the way for people all over the country who have disabilities, and he won multiple awards. He attended both Western Maryland College and Gallaudet College, a university for the deaf. He received his Ph.D. from New York University and was a professor at Hofstra University. Bowe died in 2007.

Frank Bowe was born on March 29, 1947, in a Danville hospital and was raised in Lewisburg, Pennsylvania. His parents were Frank G. and Katherine Windsor Bowe. By the time he was three years old, Bowe had lost his hearing through complications connected to a case of the measles and possibly to the new antibiotic streptomycin. On May 12, 1971, Bowe married Phyllis Schwartz, with whom he had two daughters: Doran and Whitney.

Bowe began his education at Western Maryland College and received his BA in 1969. After a lifetime of being discouraged from using American Sign Language (ASL), Bowe attended Gallaudet College in Washington, D.C., an institution of higher learning that taught and utilized ASL for its student body who experienced hearing loss. After receiving his MA from this university, Bowe began his career in education by teaching children who have disabilities and teaching others how to teach them.

In 1976, he received his Ph.D. from New York University and began research to write his first book, Handicapping America, which was published in 1978. This book is a collection of surveys and other proof that detailed to the readers exactly the type and magnitude of discrimination people who have disabilities had to endure. In 1976, Frank Bowe became the first executive director of the then young American Coalition of Citizens with Disabilities (ACCD). While working with the ACCD, Bowe participated in negotiations and demonstrations in order to secure the rights of people who have disabilities and make their issues known to the entire nation. Between 1981 and 1989, Bowe worked with the US Government, including working on the United Nation's International Year of Disabled Persons, the US Congressional Office of Technology Assessment, the Task Force on the Rights and Empowerment of Americans with Disabilities, and the Rehabilitation Services Administration. In 1989, Bowe became a professor at Hofstra University on Long Island, New York.

Bowe won many awards for advocating for people who have disabilities and for his personal success. Among his successes are the National Hall of Fame for People with Disabilities (1994), a place in Outstanding Scholars of the 20th Century, and the Distinguished Service Award of the President of the United States, signed by President George H.W. Bush in 1992. Bowe was also credited with work that paved the way for the 1990 Americans with Disabilities Act.

Frank Bowe passed away from cancer in a Melville, New York, hospice on August 21, 2007.