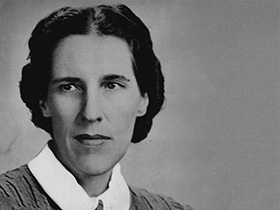 Born in Haverford in 1897, Bowen became a wellknown and respected writer of historical and biographical novels.

Catherine Shober Drinker was born on New Years Day, 1897, in Haverford, Pennsylvania, to Henry Sturgis Drinker and Ernesta Beaux. The youngest of six children, she took up the violin early in life and excelled. In 1919, she married Ezra Bowen, becoming Catherine Drinker Bowen. They divorced in 1936. She was remarried in 1939 to Thomas McKean Downs. During her first marriage, Bowen started writing. She went on to produce acclaimed works such as Yankee From Olympus (1944), John Adams and the American Revolution (1950), and The Lion and the Throne (1957). Catherine Drinker Bowen died on November 1, 1973, in Haverford after a fight with cancer.

With the arrival of the New Year in 1897, Henry Sturgis Drinker and his wife, Aimee Ernesta Beaux, welcomed into the world the last of their six children, Catherine Shober Drinker. The eight-member Drinker family resided in Haverford, Pennsylvania, until 1905 when they moved to Bethlehem, Pennsylvania, when Catherine's father, an attorney, was chosen as the next president of Lehigh University. The following years of Drinker's young life saw much travel to exotic locales such as Panama and the Suez Canal. When not traveling, Drinker attended first Mrs. Kellogg's dame school, and then the Moravian Seminary in Bethlehem.

When Drinker was 17, she enrolled at St. Timothy's boarding school in Catonsville, Maryland, where she took up the violin. Her education there continued until 1916 despite studying the violin at the Peabody Conservatory of Music in Baltimore, Maryland, from 1915 until 1917. Shortly thereafter, Drinker attended theJuilliard School (formerly the Institute of Musical Arts) in New York, New York. Despite her obvious talent with the violin, Drinker put her musical career on hold in 1919 when she married Ezra Bowen, an assistant professor of economics at Lehigh, and became Catherine Drinker Bowen. They were married on March 19 at the Arch Street Presbyterian Church in Philadelphia, Pennsylvania. Together they had two children: Ezra Bowen, Junior, and Catherine Drinker Bowen. Despite her new and seemingly difficult situation, Bowen did not give up her love for music. While it was not the concert halls and audiences that her time at Juilliard seemed to foreshadow, she continued playing in amateur string quartets and took up teaching private music lessons.

Within a year of their marriage, Bowen and her husband moved from Bethlehem to Easton, Pennsylvania, where Ezra was named head of the Lafayette College Economics Department. In that year, 1920, Bowen started writing. Her first success was an entry in an Easton Express writing contest that won her ten dollars. Despite her obvious talent, she kept her writing a secret as she continued to write stories and even a daily column for the Express. Bowen wrote articles for other publications as well. These included Woman's Home Companion, Pictoral Review, and Good Housekeeping. In 1924, after years of small-scale publishing, Bowen published two books. The first was a 127-page children's book titled The Story of the Oak Tree. The second was a historical study of her former home simply called The History of Lehigh University. However, Bowen did not claim responsibility for either of these books until 27 years later in 1951.

Bowen's published her first and only novel, Rufus Starbuck's Wife in 1932. It is believed that Rufus Starbuck's Wife was a semi-autobiographical account of her marriage to Ezra Bowen as it speaks largely of female writers and their struggle for independence. Three year later she published a book of essays about music and amateur musicians titled Friends and Fiddlers (1935), which was lauded as a spirited look at music in the home and its influences. It included passages such as, "Mothers of children... grow on every bush. No one ever said that about good fiddle players," that may have foreshadowed her divorce from Ezra Bowen just a year later in 1936.

Shortly after her divorce, Bowen started writing in the genre that would make her famous: biographies. Her first biography, "Beloved Friend": The Story of Tchaikowsky and Nadeja Von Meck (1937), chronicled the letter-driven relationship that existed between the once-struggling composer and the widow-turned-benefactor who supported him. It sold more than 150,000 copies in the United States and was selected by the Book-of-the-Month Club as one of the day's best biographies. In 1939, Bowen's life garnered two more milestones: she remarried, this time to a surgeon by the name of Thomas McKean Downs, and she released another book. This work was titled Free Artist: The Story of Anton and Nicholas Rubenstein (1939). To recreate their lives, Bowen traveled to Russia to perform research and interview people who knew and remembered the brothers. Howard Taubman of the New York Times called Bowen's recreation of the struggle that the Rubenstein family and then the brothers went through as "a handsome, throbbing tribute to two heroic fighters for art."

After two successful biographies on Russian composers/performers, Bowen set her sites on the 19th century German composer Felix Mendelssohn. Her timing was unfortunate. With Germany's 1939 invasion of Poland and the beginning of World War II, she was unable to travel around Europe as she had earlier done in Russia for research purposes. With the Mendelssohn project falling by the wayside, she turned her focus to an American icon: Oliver Wendell Holmes. In 1944, Yankee from Olympus was released and was the beginning of Bowen's search for "the foundations of [the American] constitutional government." Her goal was to tackle Holmes's personal growth and not the "law, philosophy, and public affairs" that were the "chief content of Holmes's public life." In her search, however, Bowen was often accused of stretching the bounds of truth. As Eugene Rostow says in his review, Yankee from Olympus is "full of reconstructed personal anecdotes, heroic or intimate or both, which have the unmistakable touch of legend. Some of them...are almost certainly the invention of one or another of Mrs. Bowen's informants." Despite the negative connotations, this criticism means that Bowen's book does what she meant it to. It investigates Oliver Wendell Holmes the man as he was known to the people around him, close or otherwise.

Her next work, 1950's John Adams and the American Revolution was again named as a Book-of-the-Month Club selection. The American Revolution focused on exactly that: the Pre-Revolutionary and Revolutionary John Adams. Bowen's use of the multitude of Adams manuscript materials that were once over-zealously guarded by the Adams estate allows her to paint an imaginative yet accurate picture of John Adams during his developmental years in the late 18th century. Bowen's next project was the first of three collections of essays describing her method of biography. The Writing of Biography (1951) was followed by Adventures of a Biographer (1959) and Biography: The Craft and Calling (1969).

When Bowen finally released another biography in 1957, it received critical acclaim. The Lion and the Throne: The Life and Times of Sir Edward Coke, 1522-1634 was both a Book-of-the-Month Club and History Book-of-the-Month Club selection. In addition, it garnered the National Book Award for nonfiction, the Nonfiction award of the Athenaeum of Philadelphia, and the Henry M. Phillips Prize in Jurisprudence from the American Philosophical Society. By following the man, as she had done before with Holmes and Adams, she was able to put his achievements, both personal and professional, in a context that is often forgotten: the transition between the reigns of Queen Elizabeth and King Charles I. Unlike with Holmes where Bowen was drawn to a symbol of the American Constitution and government by the people, Bowen saw Coke as symbolizing the theory of "government of laws and not of men." As was her style, Bowen wrote a biography that would capture the imagination of those educated in law and the layman alike.

After the success of Lion and the Throne, Bowen also received the 1962 Women's National Book Association Award. The award is given to "a living American woman who derives part or all of her income from books and allied arts, and who has done meritous work in the world of books beyond the duties or responsibilities of her profession or occupation." With the critical and commercial success that Bowen had recognized, and would continue to recognize, her selection for this award seems very appropriate.

Catherine Drink Bowen published three more works before she died on November 1, 1973, in Haverford, Pennsylvania, from cancer: 1963 saw the publication of Francis Bacon: The Temper of a Man. Three years later, in 1966, Bowen published Miracle at Philadelphia: The Story of the Constitutional Convention, which has been described as "a singular work of narrative history" that has been lauded as "the best single popular work on how the Äü?miracle' of our Constitution came to pass." This "world-historic drama told by a master storyteller" lays out the events as they unfolded, bringing to the forefront the character, vision, and resolve of the founding fathers as well as the dissidents of the day. Finally, Bowen penned Family Portrait in 1970. Her final work, The Most Dangerous Man in America: Scenes from the Life of Benjamin Franklin was published posthumously in 1974. It describes parts of Franklin's life leading up to the signing of the Declaration of Independence, including life as an essayist and scientist in New England, and his time spent in London during crises such as the Stamp Act Crisis. It shows Franklin, as Raymond Irwin wrote in Books on Early American History and Culture, 1971-1980, as "both an Enlightenment figure and common man."