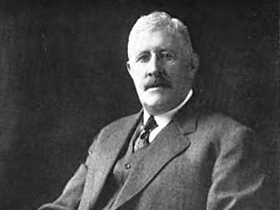 Plum native William D. Boyce was a Chicago publisher and founded the Boy Scouts of America.

William D. Boyce was born on June 16, 1858, in Allegheny County, Pennsylvania. He attended Wooster Academy in Ohio in 1880. From there he worked in Chicago, Illinois, in 1881 for a magazine and later moved to Winnipeg, Canada, to publish. From Canada he moved to Lisbon, North Dakota, in 1883 and founded the Dakota Clipper. In 1884, he married Mary Jane Beacom of New Kensington, Pennsylvania, and later that year he moved back to Chicago to publish both the Saturday Blade and the Chicago Ledger. In 1909, on his way to Africa, he was in London and discovered the Boy Scout movement of Great Britain. He brought the idea back to the United States and founded the Boy Scouts of America (BSA) on February 8, 1909. In 1915, he decided to start the Lone Scouts of America (LSA) because he was unhappy with the Boy Scouts of America. In 1924 his two organizations merged. He died of pneumonia on June 11, 1929.

William Dickson (D.) Boyce was born on June 16, 1858, on a hillside farm in Plum Township of Allegheny County, Pennsylvania. Not much is known about his childhood, but it was said that he always had an attraction to the outdoors that influenced him later in life. As a teenager he worked in a coal mine, and at age 16 he spent time teaching at a local area school. Afterward, in 1880, he attended school at the Wooster Academy preparatory school in Ohio; it is unknown, however, whether he graduated from the school. After his encounter at Wooster Academy, he worked briefly in assisting a newspaper publisher in New Kensington, Pennsylvania.

Boyce traveled to Chicago, Illinois, in 1881 and worked as a salesman for ad space in a local magazine. From this experience in publishing Boyce went on to work as a co-publisher of a weekly magazine in Winnipeg, Canada, called The Commercial. From there he moved to Lisbon, North Dakota, in December 1882, where he helped found a weekly business newspaper called the Dakota Clipper. In 1883, while Boyce was working on the Clipper, he published a booklet about the up and coming town of Lisbon, called Lisbon and Her Industries. On January 1, 1884, he traveled back to Pennsylvania and married Mary Jane Beacom, whom he had known from youth.

Because of a suspicious fire at his company office in late 1884, he immediately decided to move back to Chicago with his family. For two years he worked for a syndication service that he established. In 1887, he founded a weekly paper that was nationally circulated called the Saturday Blade, and in 1891 he purchased a literary magazine called the Chicago Ledger. It is said that Boyce was the man who came up with the idea of using young boys to deliver newspapers. He hired about 30,000 boys to help sell his two weekly newspapers.

From his work in the newspaper business, Boyce was able to acquire a large fortune, and with this he traveled around the world, reportedly visiting every country. It was during his travels in 1909 en route to an African expedition he found himself lost in a fog in London, England. According to legend, a young boy in uniform came to his aid. Once Boyce got to where he was supposed to be, he offered the boy a tip, to which the boy refused, stating that it is all in a day's work for a scout. Boyce became very interested in "scouts" and the boy told him of the organization's founder, Lord Robert Baden-Powell, and sent him in the direction of the scouting headquarters. During his stay, it is said that he met with Lord Baden-Powell and gathered as much information about the "Boy Scout" movement as he possibly could. It is unclear, however, whether Boyce actually met with Baden-Powell. He brought some of this information about the Boy Scouts with him on his four month African expedition and upon returning to Chicago he began to work on instituting the Americanized version of the British Boy Scouts.

Because of the societal climate he did not have much difficulty in making the movement catch on, and on February 8, 1910, the Boy Scouts of America (BSA) was founded by Boyce. He merged his organization with two similar groups that had already existed, the "Sons of Daniel Boone" and the "Woodcraft Indians." He also acquired help from the YMCA, who were very interested in making the movement a reality.

Boyce handed over the executive duties of his organization to James E. West, a lawyer. Boyce later clashed with West on the basis that the BSA was targeting only urban boys, as opposed to rural boys. In response to this Boyce broke ties with the BSA and in 1915 started the Lone Scouts of America (LSA). This movement targeted rural boys, and Boyce published a monthly magazine that members of this organization contributed to, called the Lone Scout. In 1920, it has been said due to increasing pressure from rural organizations such as the Ku Klux Klan, Boyce felt that it would be in the LSA's best interest to no longer allow black boys into the organization. Around that time the Lone Scout magazine's slogan changed from "A Real Boys' Magazine" to "The White Boys' Magazine."

After he created the LSA, he went on an expedition with his son to Australia and New Zealand and wrote the book Illustrated Australia and New Zealand in 1922. During this time, the LSA flourished as a branch organization, and both the LSA and BSA were finally merged in 1924. After the merger, Boyce returned to Africa in order to write the book Illustrated Africa, North, Tropical, South in 1925. On his trip to Egypt, Boyce visited the tomb of "King Tut" which had only been discovered a few months earlier. And in 1926, Boyce was awarded the Silver Buffalo Award along with the unknown scout who helped him find his day on that foggy day in London 17 years earlier. The Silver Buffalo Award is the most valued adult award in the BSA, and Boyce was the third recipient of the award.

Boyce died of pneumonia on June 11, 1929, in Ottawa, Illinois, and left behind only a small fraction of his $20 million fortune due to the onset of the Great Depression.