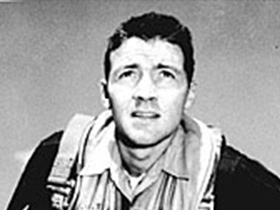 After being born in Erie, Pennsylvania, and growing up there, Boyd was a U.S. Air Force (USAF) Pilot from 1950 to 1956. From 1956 to 1960, he was a pilot instructor at Nellis Air Force Base, Nevada. In 1960, he created the Aerial Attack Study. From 1960 to January 1975, he was an Aircraft Design Consultant. In 1963, he created the Energy-Maneuverability Theory. In September 1966, he transferred to the Pentagon. After retiring from the service in 1976, he created his most important works, including Destruction and Creation in September of 1976, Patterns of Conflict in December 1986, OODA Loop in 1986, and A Discourse on Winning and Losing in August 1987. Boyd died in 1997.

John R. Boyd was born on January 23, 1927, and grew up as one of several children to a single mother in Erie, Pennsylvania, during which time the city was affected by the Great Depression. His mother, Elsie Boyd, along with all of her children, worked several jobs and attempted to prevent their neighbors from knowing exactly how far into debt the family had fallen after the loss of Boyd's father Hubert, who died on Boyd's third birthday. Elsie was a strict parent. This hard upbringing was likely one of the contributing factors to Boyd's unusually diligent work habits, often to the point of exhaustion, as he grew older.

According to Robert Coram's book, Boyd: The Fighter Pilot that Changed the Art of War, during high school, Boyd was on the swim team, where he learned several lessons, including "It is just as affective, if not more, to learn to do something correctly and use less energy, as doing it poorly while using more energy," as well as the joy of competition. From there, Boyd enlisted in the Air Force. Little came of his enlisted time, as WWII ended before he could be shipped out of basic training. After he was discharged, he attended the University of Iowa where he majored in economics. It was at the University of Iowa where he met his wife, Mary Bruce. With the war in Korea looming, Boyd joined the ROTC unit and after graduating, went off to flight training and eventually to Korea, where he flew the F-86 Saber Jet.

Due to his proficiency in aviation, Boyd attended Fighter Weapons School (FWS), the Air Force's version of Top-Gun. Due to his vast knowledge of aviation, especially when compared to his contemporaries, Boyd became an instructor at the school. Boyd had the ability to defeat any other pilot in a dog-fight. In order to humble his students, he would allow them to get behind him in an ideal firing position and, within 40 seconds, he would maneuver himself so that the positions were reversed and he had the optimum position, winning the fight. He became known as "40 Second Boyd" and was never defeated.

Because of his position within the Air Force, Boyd was learning much about how pilots dog-fight and why he was able to defeat every pilot he faced. However, without a degree in engineering, he would be unable to prove his theories. He would seek an industrial engineering degree from Georgia Institute of Technology. Before leaving FWS, though, he wrote the Aerial Attack Study; this was his legacy to the dog-fighters of the Air Force as it provided a concise and scientific explanation of how to win a dog-fight. Rather than a list of useful maneuvers as was used before, this study, which became the official dog-fighting manual for the Air Force, showed pilots how to think several moves ahead of their opponents and also showed every move and counter-move that a pilot could make.

Coram explains that at college and through his later deployment at Eglin Air Force Base, Boyd developed an equation and a theory which forever changed the way that air-craft are designed. The theory, derived from the previously mentioned equation, stated that given an air-craft's thrust, drag, weight, velocity, and drag polars (a property of an aircraft), the maneuverability of the air-craft could be determined. Using this data, United States aircraft could be compared to Soviet aircraft, thus helping pilots gain the upper hand in fights againsts their enemies. It would also help companies like General Dynamics and Northrop Grumman develop better aircraft for their military and civilian contractors.

At that time, the Air Force was having trouble developing a fighter to suit its needs. The F-111 currently in development was unsatisfactory. Boyd, who now had a reputation as a good pilot and a scholarly engineer, was assigned to fix the problem and was deployed to the Pentagon. His instructions were to "Pull the wings off, paint it yellow and install benches in the bomb bays;" at least that way it could serve some purpose as a high speed taxi. Under his continued supervision, the F-15 was developed. This was the Air Force's pride and joy. It can still hold its own with nearly any fighter in the sky today. However, the Air Force had a bad habit of piling loads of high tech equipment onto a fighter and diluting its performance. Because of this, Boyd began a quest to develop an even better fighter which would be sheltered from this "Gold Plating" effect. This fighter would eventually become known as the F-16. Boyd's brilliance for designing aircraft was even evident in the aircraft design which lost to the F-16 design. This was the F-18, the Navy's premier aircraft.

Boyd and Military Strategy says that from this point on, Boyd became less of the hot shot pilot he was before and became more of a scholar, drawing heavily on the works of Sun Tzu and other military philosophers. He continued his insight and research into the reason he was able to out fly every other pilot in the sky. He determined that it was not an inbred trait, as some believed, but a state of mind, so to speak. He wrote several briefs, designed to be given as presentations to officials within the services. They stressed, one of Boyd's favorite tactics, thinking of concepts in multiple ways. These works included Destruction and Creation, Patterns of Conflict, which was designed for the United States Marine Corps, and A Discourse on Winning and Losing.

However, the concept on which these all centered, which Boyd did not discover until 1986, was the "OODA Loop," found in Hammond's Mind of War. Considered Boyd's greatest contribution to the world, the OODA Loop attempts to explain the thought process which humans undergo while making a choice. The mind does this in a concise manner by setting forth only four steps: Observe, Orient, Decide, and Act. The theory in Hammond's Essential Boyd is that whoever can complete the cycle, and begin a new cycle the fastest, will win. Boyd's ideas did not describe how to win a war, though they could be implemented in that manner, but rather the nature of human conflict.

This concept has been used primarily by fighter pilots and the Marine Corps. However, American businesses, like the one in the Strategy of the Fighter Pilot, have picked up on it and applied it to their practices. They also use Boyd's ideas to think of innovative ways to "outmaneuver" rival businesses.

Boyd died in a West Palm Beach, Florida, hospital bed on March 8, 1997, after a long battle with cancer. Unfortunately, only one member of his family could be with him in his final moments, as the others were still en route. He is now buried in Arlington National Cemetery in Washington, DC. He was buried with full military honors and, while he was not a member of the United States Marine Corps, a marine Colonel placed an Eagle, Globe, and Anchor insignia at his headstone to show appreciation for his great contributions and acknowledging that he would have been a marine of high rank. According to Coram, this is the highest honor a marine can bestow; in fact, it was the first time in history an Air Force pilot received the honor.

Photo Credit: "Col John Boyd as a Captain or Major flying as a wingman, likely following a flight during the Korean War.." Photograph. Licensed under Public Domain. Cropped to 4x3. Source: Wikimedia.