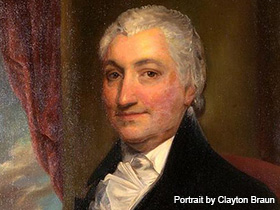 Writer and politician Hugh Henry Brackenridge founded the academy that became the University of Pittsburgh.

Hugh Henry Brackenridge was born Hugh Montgomery Breckinridge in Kintyre, Scotland, during 1748 to William Breckinridge. He changed his surname to Brackenridge "because I found the bulk of the same stock spelt it so." Five years after his birth, he and his family migrated to Pennsylvania, where they settled in York County. Just two years later, Brackenridge survived the "Indian terrors," raids on frontier settlements in York County after General Braddock's defeat. This event would forever color Brackenridge's opinions about Native Americans and the rights to the American frontier.

As the son of a poor farmer, Brackenridge performed basic agricultural duties such as clearing land and plowing. It became clear that Brackenridge had no interest in manual labor, but rather preferred reading. Noticing his passion for intellect pursuits, Brackenridge's mother ensured that her son received a thorough education. By the time he was thirteen, Brackenridge was well-trained in Latin and had begun studying Greek under the tutelage of Reverend John Blair.

When Brackenridge was fifteen years old, he began teaching at the free school at Gunpowder Falls, Maryland. In 1768, the young scholar began attending Princeton University (formerly the College of New Jersey). There, Brackenridge offered to teach grammar school classes in exchange for college expenses. He studied a wide array of subjects; among them were Greek, Latin, French, Philosophy, moral science, history, geography, criticism, public speaking, natural philosophy, and mathematics. Brackenridge befriended fellow classmates Philip Freneau and James Madison, a pair who represented the fields of literature and politics that would dominate the rest of Brackenridge's life.

In 1769, authorial collaboration between Freneau and Brackenridge began. This partnership resulted in a prose tale entitled Father Bombo's Pilgrimage to Mecca. Fragments left from this extended piece of fiction may comprise the first prose fiction in America, and if the complete work existed, it could vie for the title of America's first novel. This story reveals Brackenridge's concern about maintaining cultural values in democracy, as well as the relationship of these values to democratic success.

Another collaborative effort between these two scholars resulted in a poem called The Rising Glory of America, which was recited in 1771 at the Princeton commencement exercises. The poem, published in 1772, celebrated America's manifest destiny and the certain triumph of the new over the old in science, trade, and the arts. After graduating in 1771, Brackenridge remained at Princeton to study for the ministry, resisting the call to become a writer. The following year, he became master of an academy at Back Creek, Somerset County, Maryland. In 1774, he received a Master of Arts degree from Princeton and recited his work, A Poem on Divine Revelation, at commencement. Modeled after Milton's epic style, the poem revealed Brackenridge's shortcomings as an epic poet and was largely ignored after its publication.

In 1777, during the Revolutionary War, Brackenridge began serving as a chaplain in George Washington's army, even though he had never been officially ordained. Brackenridge believed his speeches could inspire the soldiers' patriotism, viewing himself as "a heroic bard whose oratory would inspire patriotic rather than religious zeal," since his sermons denounced the British, rather than Satan. He also found time to compose two plays, The Battle of Bunkers-Hill (1776), which praises the Americans' courage and moral victory; and The Death of General Montgomery (1776), which details British inhumanity at the siege of Quebec. Brackenridge also wrote Six Political Discourses Founded on the Scriptures (1748-1816), a selection of the sermons he delivered while a chaplain in Washington's army.

In 1778, Brackenridge began to study law under Samuel Chase of Annapolis, Maryland. Only a year later, he had moved to Philadelphia to help found the United States Magazine, which he hoped would educate and entertain his readers. By December of that year, the magazine was forced to close and its failure weakened Brackenridge's faith in the ability of the average man to improve himself through reading. In 1780, Brackenridge was admitted to the bar in Philadelphia, but upon finding the city saturated with lawyers, he chose to open his law practice on the frontier, in Pittsburgh. Although Brackenridge had previously counseled the readers of his magazines to visit the frontier, he was disappointed in what he found there. He felt that the rowdy disorganization of the frontier settlement could not properly appreciate his literary gifts.

In 1785, Brackenridge married a Miss Montgomery, and published The Trial of Mamachtaga. In this work, Brackenridge described a case in which a Native American was on trial for killing two white settlers. The sympathetic portrait Brackenridge painted of Mamachtaga revealed his often contradictory views of Native Americans; he had previously voiced his belief that seizure of Native American lands was both moral and lawful and that Native Americans should be sent north where the harsh climates would kill them. He also wrote Narratives of a Late Expedition against the Indians (1748-1816), which graphically detailed the hazards of dealing with "animals vulgarly called Indians." Brackenridge hoped this work would enlighten readers about the dangers of raids on frontier settlements, nullifying the European view of the "noble savage." Much of Brackenridge's ill-will towards Native Americans can be ascribed to his exposure to frontier raids in York, Pennsylvania, while he was still a child.

In 1786, two notable events occurred. On a personal level, Brackenridge's first child, Henry Marie Brackenridge, was born. On a more public level, Brackenridge, working towards the cultural advancement of the frontier, helped establish The Pittsburgh Gazette, to which he contributed for the rest of his life. The newspaper, the first to be published on the Pennsylvania frontier, was born out of Brackenridge's desire to be "among the first to bring the press to the west of the mountains." The newspaper served as a venue for broadcasting the interests of the Pennsylvania frontier, as well as a place to promote Brackenridge's political ambitions. Brackenridge often wrote pieces arguing the best ways to advance Pittsburgh; his efforts paid off when he succeeded in establishing the University of Pittsburgh (originally the Pittsburgh Academy). He was also instrumental in opening Pittsburgh's first book store.

Also in 1786, Brackenridge was elected to the State Assembly of Pennsylvania by constituents who were familiar with his politics voiced in the Pittsburgh Gazette. Changing his mind in office and voting independently rather than for wants and needs of his constituents, Brackenridge voted against certificate bill that would have aided frontier landowners. This move, which angered Brackenridge's voters, was followed by his Federalist support of the 1787 Constitution. This draft of the Constitution aimed to increase the powers of the federal government. Due to the unpopularity of Federalism in western Pennsylvania, Brackenridge failed in his 1788 bid for re-election. Bitter over his loss, Brackenridge founded the Tree of Liberty as a rival to the Gazette when it became a Federalist paper. In 1790, two years after his first wife's death, Brackenridge married Sabina Wolfe. The couple had three children together.

Between the years of 1792 and 1797, Brackenridge published four volumes of his most famous work, Modern Chivalry. The third volume is particularly famous as the first work of American literature written and published on the frontier. Modern Chivalry was a reflection of Brackenridge's experience as an activist for the adoption of the Federal Constitution and his term in the State Legislature at Philadelphia. The book was written when the United States was asserting its independence from Britain and establishing the United States Constitution. The satirical Modern Chivalry displayed comical human behavior in the midst of the hardships and bloodshed of developing America. Although favorably compared to Cervantes' Don Quixote from critics on the frontier, Modern Chivalry never received an equally flattering reception from critics in the eastern colonial cities.

In 1795, Brackenridge published Incidents of the Insurrection in Western Pennsylvania in the Year 1794. This book was a result of his involvement in the Whiskey Rebellion. Brackenridge opposed the excise tax on whiskey and defended some of the actors in the Whiskey Rebellion when they were prosecuted by the collector of excise. The book explains Brackenridge's ultimate failure in attempting to support the federal government while simultaneously opposing the whiskey tax, explaining his feeling of being stuck between "treason on the one hand and public odium on the other."

Brackenridge's tenure as a justice was chiefly notable for two events. The first occurred when efforts were made to impeach the judges of the court. Because his belief in judicial independence was so strong, Brackenridge asked to be included in the trial, even though he had not been a part of the case that gave rise to the impeachment attempt. Brackenridge's petition was met with a motion for his removal, which Governor McKean denied. The second key event during Brackenridge's term on the Pennsylvania Supreme Court occurred in 1814 when Brackenridge published Law Miscellanies (1814). This work, which was partially a response to Sir William Blackstone's Commentaries on the Laws of England, also included comments on Pennsylvania law and U.S. Supreme Court judgments. Law Miscellanies engaged with the popular debate over the place English common law held in the American legal system. For his part, Brackenridge believed common law should only be used when it could be beneficial to a republican society and that improvements to the law must come from the legislature itself.

Despite Brackenridge's best efforts, his judicial term was best remembered for his personal antics, rather than his professional accomplishments. David Paul Brown, a lawyer and contemporary of Brackenridge, claimed the justice was "reserved and misanthropic," and cared little about his appearance, coming to court unshaven with his hair uncombed. David Marder, in his biography of Brackenridge, further reveals Brackenridge's eccentricities:

Careless in dress, often owning only one suit of clothes and no stockings, he was not above kicking off his boots while on the bench and delivering his charge to the jury with bare feet propped on the bar of justice. Once he was seen riding naked through the rain, with his one suit of clothes folded under the saddle, for, he explained Äü?the storm, you know, would spoil the clothes, but it couldn't spoil me.'

Brackenridge died on June 25, 1816, in Carlisle, Pennsylvania. After his death, Brackenridge's son, Henry Marie, defended his father's accomplishments, saying he was "a man but imperfectly appreciated in his own day, because like others of original cast of intellect, he was ahead of the age."