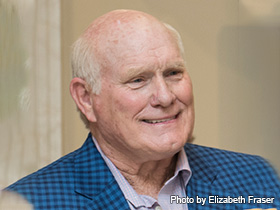 Terry Bradshaw was born in Shreveport, Louisiana, in 1948. Bradshaw had a marvelous college football career at Louisiana Tech University. This led to Bradshaw's selection as the first overall pick in the 1970 NFL Draft by Pennsylvania's own Pittsburgh Steelers. He quarterbacked Pittsburgh to four Super Bowl Championship titles in the 1970s and won the Super Bowl Most Valuable Player (MVP) award twice. Bradshaw was selected as the NFL's MVP in 1978 and was inducted to NFL's Hall of Fame in 1989. He broadcasted for Fox's NFL Sunday.

Terry Paxton Bradshaw was born September 2, 1948, in Shreveport, Louisiana. At an early age, Bradshaw's family prepped him for a successful career in athletics and also put a very high focus on academics. This preparation allowed him to excel at Shreveport's Woodlawn High School in not only football and the classroom, but also on the school's track and field squad. In his senior year at Woodlawn, he quarterbacked his team to the state championship game and also set a national record in the javelin. His academic and athletic success landed Bradshaw a full scholarship to attend the Louisiana Tech University.

While at Louisiana Tech, Bradshaw dedicated his athletic efforts exclusively to football. Also a member of the Tau Kappa Epsilon fraternity, the quarterback quickly became the NFL's most highly-scouted prospect. As a junior, he led the team to an impressive 9-2 record while amassing over 2,800 passing yards, ranking him first in the nation. Louisiana Tech advanced to the Rice Bowl following the regular season, where they overcame the University of Akron 33-13. Despite a slight decline in production his senior year, Bradshaw still maintained his status as the NFL's top prospect and was selected by Pennsylvania's own Pittsburgh Steelers with the first pick overall in the 1970 NFL Draft.

Bradshaw is best known for having one of the most successful careers in the history of the National Football League. After a few years of adjusting to the professional level, Bradshaw led his Steelers to the franchise's first Super Bowl Championship in 1974. This put an amazing ending to an up and down year for Bradshaw, who temporarily lost his position as quarterback before earning it back in time for post-season play. The following season, 1975, Bradshaw and the Steelers were crowned champions again when they defeated the Dallas Cowboys 21-17. With only a few minutes remaining, Bradshaw displayed his toughness by simultaneously suffering a concussion and throwing the game winning touchdown pass 64 yards to wide receiver Lynn Swann.

After a few mediocre seasons, Bradshaw helped Pittsburgh return to glory with another set of repeat Super Bowl Championships in 1978 and 1979. Combining great statistics while filling an obvious leadership role, Bradshaw was awarded Most Valuable Player during both of these appearances. His outstanding overall performance in 1979 landed him co- "Sportsman of the Year" with Willie Stargell, a member of the Pittsburgh Pirates. In 1983, Bradshaw retired from the Steelers with 212 touchdowns passing and nearly 28,000 yards passing, along with 32 rushing touchdowns. Bradshaw left as the first ever four-time Super Bowl Champion, an accomplishment only repeated by the great Joe Montana.

Only a year removed from football, Bradshaw quickly signed a deal in 1984 to become a television analyst for CBS's football broadcasts. During his stint at CBS, his games were frequently the highest rated in America. Steady success allowed him to begin a contract with Fox TV in 1990 to become an in-studio analyst for a new sho, Fox NFL Sunday. Since the initiation of NFL Sunday, Bradshaw has combined his football knowledge with a comic-like approach to win over viewers and the general media. Now a very valuable marketing tool for NFL, Bradshaw has also been recently seen in television commercials for stores like Radio Shack and also on the big screen. In 2001, Bradshaw earned a star on the Hollywood Walk of Fame, the only NFL football player ever to have received this honor. Various television appearances from Married with Children to Hometeam with Terry Bradshaw helped Bradshaw land a role alongside Kathy Bates in the 2006 motion picture Failure to Launch.

Bradshaw is still currently involved in the television business. In 2010, Bradshaw began hosting television shows through United States Media Television and continues to do so. Currently he is the host of Today in America with Terry Bradshaw, a show that focuses on current trends in business as well as in lifestyles.