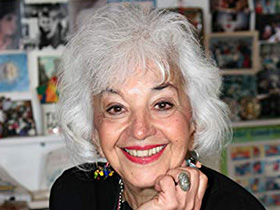 Greek-American Aliki Brandenberg was born in 1929 and took up an interest in drawing while in preschool. Graduating from the Philadelphia College of Art (formerly Philadelphia Museum School of Art), she would go on to publish many illustrated children's works, utilizing a comic book-style structure and dialogue narration, accompanying the explanatory text, along with well-researched scientific information. Aliki's various subjects include nature, fossils and dinosaurs, biographies, history and folklore, and childhood.

Aliki Liacouras Brandenberg was born in 1929 in Wildwood Crest, where her parents, James Peter and Stella (Lagakos) Liacouras, were on vacation from Philadelphia. She started drawing during her preschool years in Yeadon, Philadelphia, taking drawing lessons on weekends along with piano lessons. After high school, she enrolled in the Philadelphia College of Art (formerly Philadelphia Museum School of Art) and graduated in 1951. She first held a job in the display department at J.C. Penney store in New York City, but she soon returned to Philadelphia as a freelance advertising and display artist after a year. During this time, she also taught art classes for young students as well as ceramics courses for adults. Aliki traveled through Europe, especially in Italy and Greece, in 1956 to learn more about her Greek heritage and to further practice her artistic talents. During her trip, Aliki met her future husband, Franz Brandenberg, and the two settled down in Switzerland after marrying in 1957. Together, they would have three children—Jason, Alexa, and Demetria.

Her first illustrated book, The Story of William Tell, the Swiss hero famed for shooting an apple resting on his son's head, was published in 1960. Moving back to New York City, Aliki was asked to illustrate several more works by other authors, including her husband. Through these offers, she would produce her second book, My Five Senses (1962). Since then, the majority of her well-researched works were part of the "Let's-Read-and-Find-Out" science books through Crowell Publishers, some of which were about dinosaurs: Dinosaurs Are Different (1985), Dinosaur Bones (1988), and Aliki's Dinosaur Dig (1985). Aliki explored various other topics in her many works: simplified biographies of famous individuals (George Washington Carver in A Weed Is a Flower [1988], Louis XIV in The King's Day [1989], William Shakespeare and the Globe [1999], The Story of Johnny Appleseed [1963], and The Story of William Penn [1964]), books on fossils (Fossils Tell of Long Ago [1972]), natural cycles, industry (How a Book Is Made [1986]), history (Corn Is Maize: The Gift of the Indians [1986] and Mummies Made in Egypt [1979]), etiquette (Manners [1997]), and emotion (Feelings [1984]). Aliki's interest in her Greek heritage is most apparent in Three Gold Pieces [1967], The Gods and Goddesses of Olympus [1994], and the biography Diogenes [1968], often using frescoes style in her illustrations to describe many Greek myths and legends to unfamiliar young audiences.

Aliki and her husband moved to London, England, in 1977, where they continued writing children's books. She is also known for storybooks about her own life experiences and her three children's revolving around leisurely activities, as seen in Christmas Tree Memories (1994), and Those Summers (1995). Young children also prevail in At Mary Bloom's [1976], about a girl and her older neighbor, The Two of Them [1979], drawn from Aliki's experiences with her own father transcribed here as a relationship between an elderly man and his granddaughter, Marianthe's Story [1998], a two-part story of self-expression wherein an immigrant girl learns English to share with classmates her memories of her homeland and her journey. As perhaps Aliki's most personal work, according to reviewer Diane Rowback, Marianthe's Story "spins her tale gracefully in two media, placing words and art in impressive balance, and inventively incorporates a reverse-chronological sequence to fill in the details...she paints her characters with a range of extraordinarily expressive faces in close-up portraits."

Charles Hartfield comments that Aliki's How a Book is Made (1986) evokes "a child's curiosity, and a sense of simplicity and accessibility that one is tempted to call childlike...Yet the book proves disarmingly intricate, assembling word, image, and symbol into elaborate and constantly shifting layouts," though much technical information tends to burden the text and does not make for good reading aloud. Because of Aliki's unusual approach of incorporating comic book-style narration combined with detailed illustration and heavily-researched encyclopedic depth, a book like How a Book is Made "demands constant attention to the relative positioning and interplay of word and image, and thus poses a challenge to child and adult readers alike."

In her latest work, A Play's The Thing (2005), teacher Miss Brilliant uses a school play of "Mary Had a Little Lamb" to help curb one child's antisocial behavior. Aliki's continued use of comic bubble dialogue helps to "flesh out the plot" even though young readers "will not be able to appreciate the nuances of the boy's expressions and his deliberately unkind actions," states critic Maura Bresnahan in the School Library Journal.

"Nonfiction needs fascination with its subject...an over abundance of research and time to assimilate," Aliki says of her deep immersion into her subjects of research and illustration, according to Something About the Author. Her enjoyment comes from "writing complicated facts as clearly and simply as possible, so readers...who know nothing about a subject learn a great deal by the time we are finished." "I have to know and love my subject," Aliki continues explaining her studious talent, recalling that "I find it challenging to find out as much as I can about a person, allowing him to become a part of my life, and then writing in simplest terms the essence of his personality for young children."

With her broad spectrum of picture books in over a hundred publications as author, illustrator, or both, backed by intricate and time-consuming research of their subjects, Aliki remains popular among preschool and grade school readers for her work. This remains especially true of her contributions to the "Let's-Read-And-Find-Out Science" series of illustrated books for children. These writings often employ character-driven storylines complete with comic book-style conversation bubbles, yielding multi-textual layers to her stories and reflecting Aliki's own tastes for warm humor and enthusiasm within her many works. In 1991, Aliki was honored with the with the Pennsylvania School Librarians' Association Award.