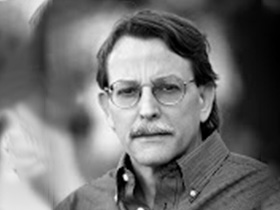 James Brasfield is an award-winning poet whose collections include, Ledger of Crossroads (2009) and Infinite Altars (2016).

James Brasfield earned his BA in English from Armstrong State University and his MFA from Columbia University. He has published poetry collections, including Ledger of Crossroads (2009) and Infinite Altars (2016), and has received fellowships in poetry from the Pennsylvania Council on the Arts and the National Endowment for the Arts. Brasfield was awarded two Senior Fulbright Fellowships to Ukraine, where he began translating the poetry of Ukrainian poet Oleh Lysheha. The resulting collection, The Selected Poems of Oleh Lysheha (1999), was awarded the American Association for Ukrainian Studies Prize for Translation and the 2000 PEN Award for Poetry in Translation. His poem "Daylight Ghosts," from Infinite Altars, was selected for publication by the Public Poetry Project of the Pennsylvania Center of the Book in 2017. Brasfield retired from his position as a Senior Lecturer Emeritus at Penn State University in the spring of 2017 and at the time of this writing lives in State College, Pennsylvania.

James (Jim) Brasfield is a poet who achieves "[c]ross-cultural empathy and a searing urgency, unfamiliar in much American poetry," says acclaimed poet and retired Penn State professor, Robin Becker in reference to Brasfield's 2009 collection Ledger of Crossroads. He published his second collection of poems, Infinite Altars, in 2016, and is the recipient of poetry fellowships from the Pennsylvania Council on the Arts (Literature-Poetry) and the National Endowment for the Arts (Creative Writing in Poetry), among others. He believes that "art is absolutely necessary in this suffering world," he reveals in a reading at Pennsylvania State University on January 19, 2017. "Each poem is a place we enter and reside in. We experience something there."

Brasfield was born in Savannah, Georgia, and earned his BA in English from Armstrong State University. He was named a Notable Alumni by Armstrong in 2011, which celebrates alumni who have "made an impact on their communities and who continue to honor the university through their accomplishments and service," according to Scott Joyner, the Armstrong vice president of advancement at that time.

While earning his MFA from Columbia University, Brasfield "studied poetry and translation with Joseph Brodsky, Derek Walcott, Daniel Halpern, and other luminaries," says Zo?ù Brigley Thompson of The Midnight Heart. She names Oleh Lysheha and Paul Celan as "powerful influences on Brasfield's poetic imagination." Brasfield also served as an Assistant Poetry Editor for The Paris Review.

He has been awarded two Senior Fulbright Fellowships — one in Creative Writing at the National University of Kyiv-Mohyla Academy, Ukraine (1993-1994) and another in American Studies and Translation at the National University of Chernivtsi, Ukraine (1999). In 1993, he began collaborating with Ukrainian poet Oleh Lysheha on translating Lysheha's poetry.

The resulting collection, The Selected Poems of Oleh Lysheha (1999), won the American Association for Ukrainian Studies Prize for Translation and the 2000 PEN Award for Poetry in Translation (presented at the Walter Reade Theatre at Lincoln Center, May 15, 2000, where fellow nominees and winners included John Updike and Annie Dillard, according to The Ukranian Weekly's Olena Welhasch). His translation of Lysheha's poem "Swan" also received a Pushcart Prize.

While accepting the PEN Award, Brasfield said that "'To many Americans, Ukraine was a place in Russia, a region called 'the' Ukraine. Many Americans do not know that the Ukrainian language and thus its literature were forbidden. For a large audience now, The Selected Poems of Oleh Lysheha will be a further step for Ukrainian culture from the dark of the Russian and Soviet shadow.'"

To teach during his fellowships in Ukraine, he tells David Pacchioli of Penn State News that he had to seek assistance from the American House in Kiev at the American Embassy to acquire books for his course. At the time, students there seldom had texts to accompany lectures. "In classes, they were sheer joy, very eager," Brasfield says. "They loved the open western style—reading and asking questions." At the National University of Kyiv-Mohyla Academy, he also guided students in publishing the first literary magazine in the university's history. He says he left Ukraine with "a better understanding of what's important in life. They depend on each other. They have to. And they get by."

Brasfield's work has also been included in anthologies, such as Feathers from the Angel's Wing: Poems Inspired by the Paintings of Piero della Francesca (Persea Books, 2016) — which borrowed its lead title from a line in his work — and Poetry Daily: 366 Poems from the World's Most Popular Poetry Website (Sourcebooks, 2003). Other poems have appeared in Poets.org, Verse Daily, and How a Poem Happens: Contemporary Poets Discuss the Making of a Poem.

His poem "Palladium" has even been set to soprano and piano by musician and composer Edward Jacobs.

"This book makes one realize anew the power of narration in poetry. In Jim Brasfield's gifted hands it brings to remarkable life the smallest moment, the oldest myth, the acuteness of time."