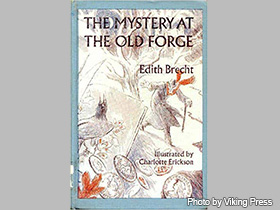 Children's author Edith Brecht was born in Lancaster, Pennsylvania, in 1895. Though her quest for education eventually took her to Philadelphia, her heart truly lay with the people and countryside of Lancaster County. Most of her books are based on experiences in the Lancaster area. Brecht died in Lancaster in 1975.

Edith Brecht was born in Lancaster, Pennsylvania, on April 7, 1895. Her parents were Milton J. Brecht, an educator and public service commissioner, and Mary M. Wolfe.

Brecht studied at the National School of Elocution in Philadelphia, Pennsylvania, and Millersville State College (now Millersville University of Pennsylvania). After years of living in suburban Philadelphia, she returned to and lived in an agricultural section of Lancaster County. She resided there with family members in an old stone mansion. One night at this mansion, a snowy owl came in a blinding snowstorm to sit on a windowsill—an incident she used in Timothy's Hawk (1965) and The Mystery of the Old Forge (1966).

She then lived alone in a cottage on the edge of a meadow in front of the Conestoga Creek, and she could see the open countryside from her windows. Her professed excitement about the returning of the seasons and the things associated with it—each bird voice, the opening of wildflowers, and greeting old friends—were used as settings and characters for her children's stories. Her friends and neighbors were the Amish and Mennonites. She was deeply interested in their unique culture. Because she lived among them, she believed it was natural to write about them. Benjy's Luck (1967) and The Little Fox (1968) are about the Amish, and Timothy's Hawk and The Mystery of the Old Forge are also stories drawn from her Lancaster County experiences.

Brecht contributed a lot of poetry and stories to magazines such as Poetry World, Chatelaine, Toronto Star Weekly, Woman's Day, Ladies Home Journal, McCall's, and Farm Journal. Many of Edith Brecht's stories have been reprinted in Danish and Swedish.