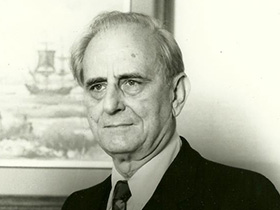 Author of Sea Island Yankee and How Grand a Flame, Clyde W. Bresee was an educator in Athens for years.

Educator, counselor, and psychologist Clyde W. Bresee was born in Ulster, Pennsylvania, in 1916. He spent many of his formative years on James Island, South Carolina, a place that would become the focus of his writing life. Upon his return to Pennsylvania, he taught high school English before joining the Army in World War II. After the war, he proceeded with his educational career until he retired the 1970s and began his writing career. He has published a memoir of his time on James Island and a history of a local plantation family. Bresee lives in northeastern Pennsylvania.

Clyde Bresee was born on February 2, 1916, in Ulster, Pennsylvania, a son of Chester J. and Ruth Gillette Bresee. Early in Clyde's life, the Bresees packed up their belongings and moved from their Bradford County farm to James Island, South Carolina. This move would later shape Bresee's writing career. They remained on their sea island dairy farm until the mid 1930s when they returned to Bradford County.

Back in northeastern Pennsylvania, Bresee attended Mansfield State Teachers College (now Mansfield University of Pennsylvania) and graduated in 1937. He then became an English teacher, first at Ulster and then at Athens. While teaching at Ulster, Bresee also earned a Masters degree in education from Penn State in 1942. In the midst of his tenure at Ulster High School, Bresee married another teacher, Elizabeth Barner, on June 19, 1941. They had two children: Jerome and Catherine.

Bresee left Ulster in 1943 to volunteer for the U.S. Army. His initial training period with the Tenth Mountain Division in Colorado occasioned a lengthy correspondence with his wife Elizabeth, a correspondence he would later collect for family purposes and for the Denver Public Library. A member of the Medical Administration Corps, Bresee would attain the rank of first lieutenant by the time he left the service in 1946.

After the war, Bresee taught English at Athens High School and earned his Ph.D. from Cornell University in 1956. In 1953, he stopped teaching English at Athens HS and became a guidance counselor for the rest of his career. He was also a visiting instructor in psychology at Cornell from 1957 to 1975.

Upon his retirement from teaching and counseling, Bresee began to write the first of his two published books: Sea Island Yankee. This memoir of his years on James Island, South Carolina, would bring very favorable reviews. Harriet Choice wrote in the Chicago Tribune: "From the plantation store where he sold penny candy to the edge of the creek where he fished for crabs, Bresee has crafted a journey to land now buried and forgotten in rows of subdivisions." New York Times critic Andrew Harvey concurred, calling Bresee "a writer of distinction from whom we must hear more. His prose is transparent, supple and spare; he evokes unhurriedly the smells and textures of the Southern world of his boyhood."

Bresee's second book, How Grand a Flame: A Chronicle of a Plantation Family, 1813-1947, was also stimulated by his time in the South, though in a far less personal manner. This book details the Lawton family's ownership of a plantation in South Carolina, drawing its main research from the diaries of Celia Lawton and frequently supplemented by Bresee's commentary throughout. This latter quality did not endear the book to critics, but rather generated luke-warm reviews.