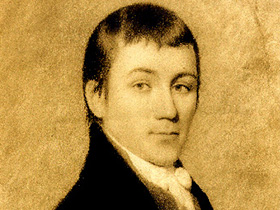 Philadelphia native Charles Brockden Brown successfully published six novels and numerous pamphlets and essays. He also was founder and editor of two literary journals. He is best known for the novel Wieland (1798) and the periodical The Literary Magazine and American Register. Brown was the first American to earn a living as a writer.

Charles Brockden Brown was born on January 17, 1771, in Philadelphia, Pennsylvania. He was the fifth son of Quakers Elijah and Mary Armitt Brown. Brown married Elizabeth Linn in 1804 after a four-year relationship. The couple had four children together. He attended the Friends Latin School and studied law under Robert Proud, a well-known and experienced professor of jurisprudence. After graduating, he apprenticed for Alexander Wilcocks, a Philadelphia lawyer.

Brown joined the Belles Lettres Club of Philadelphia in 1786. Then, in 1793, he gave up law and decided to focus on a literary career in Philadelphia and New York City. Brown became known as the father of the American novel and called himself a storytelling moralist.

Brown's most famous novels include Alcuin: A Dialogue (1798) and Wieland (1798). Alcuin focuses on the question of women's rights and liberties and the topic of divorce. Wieland is a murder mystery novel solved by ventriloquism with religious ambiguity tied in.

Brown's close encounter with disease inspired his next two novels, Ormond (1799) and Arthur Mervyn (1803). Arthur Mervyn describes the epidemic of yellow fever in Philadelphia. Clara Howard (1801) and Jane Talbot (1801) demonstrated Brown's sentimental side. They addressed women's subjects and romance. In April 1799, Brown founded and edited The Monthly Magazine and American Review. In December 1800, the magazine was renamed The American Review and Literary Journal and continued until 1802.

During 1803, Brown accomplished many things. He started another periodical, The Literary Magazine and American Register. It lasted until 1860. Brown also published two political pamphlets that year criticizing the purchase of Louisiana territory.

Brown died of tuberculosis on February 22, 1810. He was only 39. He left behind many unfinished and unpublished works and several elaborate architectural drawings. One of these works was System of General Geography; Containing a Topological, Statistical, and Descriptive Survey of the Earth, which has since been lost.