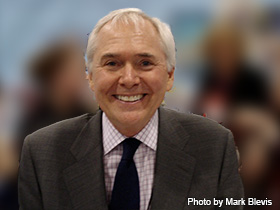 Erie native Marc Brown, creator of the Arthur children's books, has won the Peabody Award for Excellence and many Emmy Awards.

Marc Brown is an author and illustrator. Brown was born on November 25, 1946, in Erie, Pennsylvania. He attended the Cleveland Institute of Art and graduated in 1968. He is the creator of the popular and award-winning Arthur book series. The success of the series has spawned many other projects: the television series (on Public Broadcasting System [PBS])‚ Arthur's World‚ chapter books, and collaborations with his wife and fellow writer/illustrator Laurie Krasny Brown. Brown has won several major awards for his children's books, five Emmy Awards, and a Peabody Award. He has traveled the country talking to children about the Arthur series. At the time of this writing, Brown lives at Pilot Hill Farm on Martha's Vineyard, Massachusetts.

Marc Tolon Brown was born on November 25, 1946, in Erie, Pennsylvania. Brown is the son of LeRoy Edward and Renita Toulon Brown. He graduated from the Cleveland Institute of Art in 1968. In 1968 he married Stephanie Marini (the marriage ended in divorce in 1977) and had two sons, Tolon Adam and Tucker Eliot Brown. Brown then married fellow writer, Laurie Krasny, in 1983 and had one daughter with her, Eliza Morgan. Brown worked numerous jobs before writing and illustrating numerous books. He began working as a truck-driver, short-order cook, soda jerk, assistant college professor at Garland Junior College, television art director, actor, and costume set designer for WICU-TV (an NBC network affiliate). Brown began illustrating books for authors in 1969 while holding these other jobs.

The first book Brown illustrated was Isaac Asimov's What Makes the Sun Shine?, which won a Children's Books of the Year citation from the Child Study Association of America. A Boston-based publisher, Houghton and Mifflin, offered him freelance work in illustration. After about five years of illustration, Brown decided to try and create his own stories. The popular Arthur books began when Brown's son wanted to hear a bedtime story and he made one up about an aardvark named Arthur.

The first Arthur book was Arthur's Nose (1976), which won the Children's Choice Award from the Children's Book Council/International Reading Association. After the first book was a success, many publishers and illustrators wanted to contract Marc Brown. He has been working on his own projects ever since, creating over 100 Arthur books, some even written for a Spanish audience. The books are geared towards beginning readers and are about Arthur's daily activities at school and home. Many of the characters, locations, places, and stories come from the people, places, and past of Marc Brown's own life. Many of the characters represent his siblings and many of Arthur's adventures are about his children.

Marc Brown has received many awards for his books. Some of these include: Children's Books of the Year of the Child Study Association of America, Children's Choice Awards of the Children's Book Council, International Reading Association (for Arthur's Nose, Arthur's Eyes [1979], Arthur's Valentine [1980], The True Francine [1981], Arthur's Halloween [1982], Arthur Goes to Camp Arthur [1982], and Arthur's April Fool [1983]), Notable Book, American Library Association, Boston Globe/Horn Book Honor Award for Illustration, Library of Congress Book of the Year, and many others. Until the 1990s, Brown worked with his wife on a number of projects including a trio of books about two dinosaurs named Rex and Lilly. Once the Arthur books became more popular, their collaborative projects diminished in number. The popularity of Arthur soared after the creation of Arthur's World, a television show on Public Broadcasting System (PBS). This program has gained huge popularity with audiences and critics alike. The show has won five Emmy Awards and a Peabody Award for outstanding television. Other projects Marc Brown has been involved with are chapter books of Arthur written by Stephen Krensky, a separate series about Arthur's sister, D.W.

Marc Brown has written nearly 100 Arthur books and has since refocused on illustrating a variety of books. At the time of this writing, he lives at Pilot Hill Farm on Martha's Vineyard, Massachusetts.