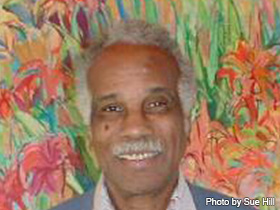 Ashley Bryan was born into a tight-knit community on July 13, 1923, in Harlem, New York. He was raised in the Bronx by his Antiguan immigrant parents, along with two brothers, two sisters, and three orphaned cousins. Despite the hardships of a large black family who lived during the Great Depression, Bryan and his siblings possessed a great sense of community and African American pride, living in a place where neighbors and friends were referred to as their aunts and uncles.

Bryan's artistic abilities were influenced and nurtured by his family and community. The neighborhood was a mix of all nationalities, religions, and professions and held together by the local German Lutheran church. His mother had a love of gardening and had her children make paper bouquets to bring color and light into the small apartment. An assignment by his kindergarten teacher to make a drawing for each letter of the alphabet resulted in the creation of Bryan's first book. As he grew older, he continued to create these "limited editions" as gifts for his friends and family. The church also nurtured Bryan's artistic talents and allowed him to teach his own class at the age of twelve.

Perhaps the most important contribution to his genesis as a storyteller was the tendency of his community to foster relationships through storytelling. As Bryan now says, "It is a deprived child who has no stories to tell." The oral tradition was present in the tales of his elderly neighbors, the silly questions he asked his mother, and the vocal and physical storytelling of his Antiguan grandmother. He still calls his grandmother the best storyteller he has ever known. Despite the language barrier, she was able to convey her meanings in tones, rhythms, and gestures that instilled a sense of ancestry in her grandchildren. Because African American literature was not prevalent in his classes, he was able to affirm and strengthen his culture by identifying with the characters in his grandmother's verbal tales.

Just as his grandmother made sure that her children were proficient in a trade, Bryan's mother also made sure that her children were well educated. Library books always filled makeshift crate shelves, and community activities involving the arts were encouraged. Bryan's art proficiency won him a scholarship to the Cooper Union Art School on the basis of his talent, despite being told that it was a waste for a colored man to have an art scholarship. He had to take a leave of his education in order to fight in World War II, but finished his curriculum once the war was over.

He was then accepted into Columbia University where he picked up the art of bookbinding, pursued a degree in philosophy, and discovered a passion for studying the art of different cultures, especially the art of his African ancestors. This passion led to a Fulbright Scholarship for art studies in Europe, and he traveled to France and Germany. It was there that he saw children performing spirituals and being educated about them, whereas African American children seemed to have little-to-no understanding of their roots. He wondered if this discrepancy was due to the lack of books on the subject. This notion, and his courses in African art, laid the basis for the children's books that would become his life's work.

Bryan began his career teaching art at Queens College - The City University of New York (CUNY), Lafayette College in Pennsylvania, and Dartmouth College in New Hampshire. At Dartmouth, Bryan chaired the Art Department, and later became Professor Emeritus of Art and Visual Stories. Retirement from academia led to the opening of his own gallery, and his eventual discovery as an author and illustrator.

Word reached an editor of Atheneum publishers about Ashley Bryan's studio and the colorful, hand-stitched books inspired by African art, and they quickly set the artist on creating illustrations for Bengali poet Rabindranath Tagore in 1967. This successful partnership led to thirty additional titles and Bryan penning his own stories to tell, because he was unsatisfied with the way African American children's books were written at the time.

Cultural themes are prevalent throughout Bryan's work. His mantra is to "be strongly rooted in who you are—your people and what they have had to offer, then reach out and draw upon the gifts of other peoples of the world." His variety of talents led to his reputation as a Renaissance Man. He does not see himself as solely a writer, illustrator, or storyteller. "A person is involved in so many things," he once said, "and they flow, they move one into another."

Like the African American poems in which he places so much importance, Bryan employs the use of close rhymes, alliteration, onomatopoeia, and syncopation. His texts have a rhythmic quality and are meant to be read aloud. Children's book website Embracing the Child says Bryan shows "a keen ear for music of spoken word and a deep respect for its power to enrich lives." His purpose is not merely to write words, but to inspire others to read them aloud. "If you don't hear a poem spoken, it's like never hearing a song sung." He has a love for unexpected wordplay, sound, and repetition, all of which is apparent in his work.

Even his artwork has a fluid, lyrical element. Of oil painting, Bryan says that, like the Impressionists, he paints outside, but he works from rhythm instead of from light. "When I'm doing a painting, I'm drawing upon the rhythm of the landscape. If I'm reading a poem, there is an essential flow of rhythm that is going to carry that poem. I have to give each work the energy that it needs to bring it alive, you see." The combination of this artwork with the text creates something wholly unique, and still a major part of the oral tradition. Most of his stories and artwork are derived from African tales, reinvented and retold with the artistry of poetry.

One of these reinvented and poetic African stories, The Dancing Granny (1977), was inspired by a story from his parents' native Antigua and his own grandmother. "She picked up all the dance steps from the great-grandchildren and outdanced them all!" Bryan has said. The painting, while seeming like unfinished sketching, was inspired by 18th century Japanese artist Hokusai, whose flowing and fluid lines gave a sense of forward motion. Bryan could think of no better way to portray the woman who used to exclaim, "Dancing sweet me so!"

Beat the Story-Drum, Pum-Pum (1980)is a collection of Nigerian folktales that explore the reasons why different animals do not get along. Much like Aesop's fables, these stories have an important moral for children, represented by the problems of the different animals. The block prints and colors of the illustrations are reminiscent of the African tradition, and seem to almost be carved into the page. In all he has written over 30 books, including The Cat's Purr (1985), The Ox of the Wonderful Horns and Other African Folktales (1971), and Ashley Bryan's African Tales. Uh-Huh (1998).

Illustrations of his stories resemble woodblock prints and seem to condense all of Bryan's art knowledge into a single, unique style. For each book, he incorporates Chinese and Japanese brush paintings, medieval block-printed books and illuminated manuscripts, or Renaissance tradition of drawing, depending on which best fits the text. Here, the woodblock print design seems to also draw inspiration from the block-printed books to create a distinct African American design.

Bryan has won numerous awards for his work, such as the Coretta Scott King Award, Maine Lupine Award, Coretta Scott King—Virginia Hamilton Lifetime Achievement Award, and the Laura Ingalls Wilder Award. The Children's Room at the Mott Haven Library, the Bronx, New York, was also named after Bryan in 2001.

In 2002, Bryan's poem "Song," from Sing to the Sun,was selected for publication by the Public Poetry Project for the Pennsylvania Center for the Book. Sing to the Sun was also the first selected winner of the Lee Bennett Hopkins Award for Poetry in 1993.

Full of art, photographs, and the rich tales of his life, Bryan's autobiography, Ashley Bryan: Words to My Life's Song, was published by Atheneum Books in 2009. Two of his other latest books include, Who Built the Stable?: A Nativity Poem (2012) and Can't Scare Me! (2013).

Bryan now resides in Islesford on Little Cranberry Island off the coast of Maine, where he has summered since 1946, but is far from retired. He draws inspiration from a house full of toys, art, and literature, as well as from his past. He paints the gardens and landscapes of Maine, reminded of his mother's love of plants. He continues to illustrate and write children's books, carrying on the traditions of spirituals and poetry. He makes puppets reminiscent of African art traditions from objects he finds on the shore. Perhaps more importantly, like his beloved grandmother, he shares his love of storytelling and of the past with future generations by leaving his island home to perform his tales and is often found singing in a cluster of children.

"I try to be like a child in what I do," he says in a Simon & Schuster video, "And a child explores with all sorts of materials, with all sorts of ideas, in many ways, and so my books are varied and they are very influenced by the audible world."

Bryan urges children to explore their identities through creativity and to find strength in their community's response to their efforts and creations, reminding them that behind each book that he has published is a limited edition, much like the ones that they are doing in their elementary schools.