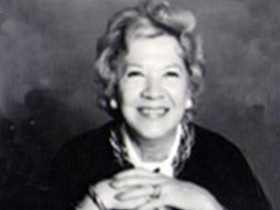 Literary agent and author Ann Buchwald was born in Warren, Pennsylvania, in 1920. While working as a publicity director in Paris, she met and married columnist Art Buchwald. Upon her return to America, Buchwald became a literary agent and an author of three children's books on manners. She published her memoirs in 1980. Ann Buchwald died in 1994.

Ann McGarry Buchwald was born in Warren, Pennsylvania, on April 18, 1920. Her parents were Paul and Marie Beam McGarry, and she was the eldest of eleven children. She grew up attending local schools.

Ann McGarry Buchwald's career with words had many dimensions. From her arrival in Paris in 1949, she became the publicity director for the French couturier Pierre Balmain. She had already learned about the fashion industry while employed as a fashion coordinator at the Nieman-Marcus department store. Her experience with Balmain gave her the expertise to open her own public relations firm in 1950.

While in Paris, she met and married Art Buchwald, then a correspondent for the Paris Herald-Tribune, a legendary humorist and award-winning columnist. After their 1952 marriage, the couple adopted three children: Connie, Jennifer, and Joel. The new family returned to the United States in 1962.

Buchwald befriended model and DC socialite Marjabella Young Stewart. Buchwald and Stewart wrote three books intended for children on the subject of manners. At the same time, Buchwald also took up a career as a literary agent, working first with New York agent Roslyn Targ, and then Hollywood agent Irving Lazar. Lazar and Buchwald would have a falling out in 1974 when Lazar agreed to represent former President Richard Nixon. Buchwald believed that her husband's columns, which regularly lampooned Nixon, caused a conflict of interest and triggered her resignation from the partnership. Later Buchwald would write a memoir of their time in Paris, Seems Like Yesterday (1980), recalling the atmosphere of post-war Paris and their famous friends Humphrey Bogart, Lauren Bacall, and Lena Horne.

Buchwald separated from her husband in 1992, but they spent much time together in 1994 as close companions after she was diagnosed with lung cancer. Ann McGarry Buchwald died on July 3, 1994, in Washington, D.C. Buchwald is survived by three grandchildren. She is buried next to Art in Martha’s Vineyard, the couple’s favorite vacation spot, and a place that inspired her writing.