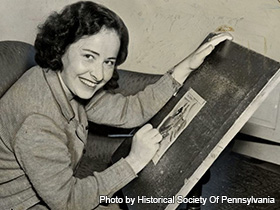 Born in 1904, Marjorie Henderson Buell was an American cartoonist, most famous for creating the comic strip "Little Lulu." The strip debuted in the Saturday Evening Post on February 23, 1935, and ran weekly for the next ten years. "Little Lulu" was a curly haired girl, much given to mischief. Lulu's popularity grew as Buell engaged in various business merchandising and advertising, making Lulu the advertising icon for Kleenex Tissues. "Little Lulu" still remains popular after Buell's death in 1993.

American cartoonist Marjorie Lyman Henderson was born on December 11, 1904, in Philadelphia, Pennsylvania. Her parents were attorney Horace Lyman Henderson, and Bertha Brown Henderson. Marjorie Henderson Buell was the eldest of three daughters, all of whom enjoyed drawing comics.

Buell's most famous cartoon comic strip was "Little Lulu," but she was a cartoonist much earlier than Lulu's debut in the Saturday Evening Post. As a young girl, Buell and her two sisters were the comic artists behind birthday cards and at special family events. At age eight, Buell sold drawings to her friends, and by the time she was in high school, Buell had sold cartoons to the Philadelphia Ledger. She received her first real start as an illustrator when Ruth Plumly Thompson, her mentor and the author of many of Oz books that followed the death of L. Frank Baum, asked Buell to illustrate her book, King Kojo. Buell also illustrated some of Thompson's short stories featured in magazine publications.

During the 1930s she met Clarence Addison Buell, a Bell Telephone of Philadelphia executive. The two married in 1936 and the couple had two sons. They lived on Buell's estate in Malvern.

By the time Buell seriously pursued a career as a cartoonist, she was selling single-panel cartoons to such humor magazines as Life and Judge. Her cartoons were also sold to Country Gentleman, Collier's, and the Saturday Evening Post. "Dashing Dot," a curly haired girl with long legs and sweetness to her appearance, was a regular in a magazine publication, while "The Boyfriend" had recurring appearances as a syndicated comic strip.

It was the creation of "Little Lulu," however, that brought Buell prosperity and fame. In early 1935, Buell was asked to create a single-panel pantomime cartoon to replace Carl Anderson's "Henry." As "Henry" and its mouthless, bald-headed boy left the Saturday Evening Post for national newspaper syndication, Buell created "Little Lulu," a curly haired girl who she thought "could get away with more fresh stunts that in a small boy would seem boorish."

In one "Little Lulu" single-panel pantomime, Lulu is absent-mindedly walking a dog covered from snout to body with a red and white striped sock. In the background is a man who stops and looks at Lulu walk by with her dog after he was frantically looking for the matching sock to his red and white striped one he has on his right foot. Another single-panel pantomime illustrates Lulu's strategy in a snow fight. Two boys are hiding behind a fort made up of snow that protects them from Lulu and her snow balls. On the other side of the fort is Lulu shining a big lamp at their fort. As she rests one hand on the lamp stand, she is holding a snowball in the other, and the other snowballs are stacked up and trailed behind her.

Just as its creator predicted, "Little Lulu" did get away with more fresh stunts. The single-panel pantomime cartoon appeared in the Saturday Evening Post every week, after it first appeared on February 23, 1935, for ten years. In 1939, Knickerbocker Toy Company began making "Little Lulu" dolls to help boost the sales of the Post and Ladies' Home Journal. The two publications offered the doll as a premium for readers who took a two-year subscription.

Lulu's popularity grew as Buell began a 16-year engagement, in 1944, with Kleenex Tissues to use Lulu as their advertising mascot. "Little Lulu" was featured in newspaper and magazine advertisements, billboards, display cards in trolleys and subways, and on buses. According to the Kleenex Company, the little curly-haired girl in red "spends her time reminding Americans to conserve to support the war effort."

The Saturday Evening Post did not like the idea of Little Lulu as an advertising character, but they had no say in the matter. Being the smart business woman she was, Buell protected her rights of her creation and did not sign them over to anyone. Thus, she was legally able to do as she pleased with the character. Partly as a result of this rift, on December 30, 1944, the Post and Buell parted ways, and the last "Little Lulu" cartoon was released in the Post.

The end of Buell's obligations to the Post meant the start of new business opportunities that would make "Little Lulu" larger than life, and spread her image around the world. In 1945, Western Publishing Company released Marge's Little Lulu, the first of many more comic books to be released. The comics were written and drawn by John Stanley of Western Publishing Company, but Buell controlled all rights to it, including both written and illustrated content. The comic books would later be translated into various languages and released around the world. The languages included, but are not limited to, Japanese, Spanish, Greek, Arabic and Finnish. While turning over the responsibility for the comic books to John Stanley, Buell did continue illustrating the Kleenex advertisements. By the late 1940s, Marjorie Buell began merchandising "Little Lulu" in many different areas. "Little Lulu" began as a doll, and later appeared on such products as greeting cards, balloons, toys, been bags, towels, and children's apparel.

In 1971, Buell decided to sell the rights of "Little Lulu" to Western Publishing. She later moved to Oberlin, Ohio and retired there until her death on May 30, 1993, in Elyria, Ohio.

"Little Lulu" had feisty ways, sarcastic actions, and an "I can do better than any boy" attitude that had many young girls look up to her as a role model, but Marjorie Buell was no feminist. Instead, Buell was more concerned with being a successful business woman with a craft that came naturally to her, even at age eight.