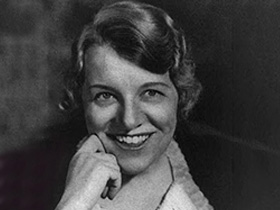 Bugbee was a founder of the Newspaper Women's Club of New York and wrote on women's issues. She is most known for her coverage of Eleanor Roosevelt.

Emma Bugbee, a leading female journalist, was born in Shippensburg, Pennsylvania, in 1888. She worked for over 50 years for the New York Herald Tribune. She became most famous for her coverage of First Lady Eleanor Roosevelt. Bugbee died in 1981 in Rhode Island.

On May 18, 1888, Emma Bugbee was born in Shippensburg, Pennsylvania to Edward Howard Bugbee and Emma A.J. Bugbee, who both taught high school students. While she was born in Pennsylvania, Bugbee lived most of her adult life in New York. She graduated from Barnard College and taught Greek courses at a high school in Methuen, Massachusetts. In 1976, she moved to Warwick, Rhode Island.

In 1911, Bugbee got her first and only newspaper job with the New York Herald (which later became the New York Herald Tribune), where she worked as a reporter for approximately 18,911 days or 55 years. Initially, she was temporarily filling in for a college friend who was traveling abroad in Germany; when her friend chose to remain there, the Tribune hired Bugbee. She mainly wrote on women's issues. Bugbee says, "There were some situations I just took for granted: that I was covering famous women of the period and not particularly famous men."

Bugbee was one of a handful of prominent female reporters who sought to expand the role of women in the male-dominated world of journalism that existed when she began her career. In fact, for her first four years working as a reporter, she never received a by-line, which means that she didn't get credit for the stories she wrote. Additionally, because the newsroom was all-male, Bugbee was forced to work on a perch located outside of it. Bugbee's first important newspaper assignment was covering a week-long march of suffragists from New York City to Albany. Her feminist ideals were reinforced in her founding of the Newspaper Women's Club of New York in 1922; she also served in the capacity of President for three terms.

She was best known for her intimate coverage of Eleanor Roosevelt, beginning in 1933—amidst the early days of President Franklin D. Roosevelt's terms of office—and ending with a reminiscence of the former first lady, written on the day of her death in 1962.

Bugbee worked to inspire young women to become journalists. She was the author of the "Peggy" children's book series, which were fictional books written for young women regarding the world of journalism and reporting.

Emma Bugbee retired from the New York Herald Tribune two days before the newspaper ceased publication in 1966. During her retirement she traveled and painted landscapes while staying at her summer home in Bethel, Connecticut. She died on October 6, 1981, in Warwick, Rhode Island.