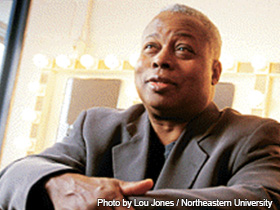 Award-winning playwright Ed Bullins (creator of Goin' a Buffalo [1968] and The Taking of Miss Janie [1975]) grew up in Philadelphia.

Ed Bullins was born on July 2, 1935, in Philadelphia, Pennsylvania. He is an African-American playwright and author who has written over 100 plays. Bullins dropped out of Franklin High School in 1952 and joined the Navy. After serving for four years, he moved to California to continue his education and there he began writing plays. Bullins won several awards and grants over his career. His best known works include Clara's Ole Man (1965), The Taking of Miss Janie (1975), and Goin' a Buffalo (1968).

The influential African-American playwright Ed Bullins was born on July 2, 1935, to Edward and Bertha Marie Queen Bullins. Bullins received his elementary schooling at the predominantly white Ludlow Elementary School. He spent the summers vacationing in the Maryland farmlands. In junior high, he was transferred to an inner-city school in a tough part of Philadelphia. Bullins joined a gang and nearly died after being stabbed in the heart during a street fight. He attended Franklin High School, but eventually dropped out and enlisted in the United States Navy in 1952. While in the navy, he won a shipboard lightweight boxing championship and, more importantly, he started reading to educate himself. Bullins got out of the Navy in 1955, and three years later moved to Los Angeles to attend Los Angeles City College and earn his GED. He then took a train north to the San Francisco Bay area where he first began his professional playwriting career. He realized that only closed circles of African Americans read fiction so he wrote his plays as an effort to reach more of this population. In 1968 Bullins met his future wife, Trixie, while in London. The marriage ended in 1981. Bullins also has nine children: Eddie Jr., Donald, Ronald, Darlene, Patsy, Diane, Sun Ra, Ameena, and Catherine Room. He received his BA in English and playwriting from Antioch University in 1989 and his MFA in playwriting from San Francisco State University in 1994.

Bullins began his career with the production of How Do You Do?, Dialect Determinism (or The Rally), and Clara's Ole Man , which were all produced for the Firehouse Repertory Theatre in San Francisco in 1965. Clara's Ole Man later helped Bullins earn the Vernon Rice Drama Desk Award. The play is about an educated young black man, Jack, who tries to court Clara in a slum kitchen on a rainy afternoon in South Philadelphia. Jack's efforts are blocked by a low-income lesbian, Big Girl, who stays home from work and gets Jack drunk. Eventually Big Girl succeeds in thwarting Jack's efforts when three of her young male friends show up after running from the cops. Jack had originally stated that he went to visit Clara because she said her old man would be at work that afternoon. He is shocked to find out that Big Girl is actually the old man. The three boys take Jack outside for a beating as the play ends. As Samuel Hay notes, the historic importance of this play is that it was the first scripted non-homophobic play in African American theatre. On a more general note, the play successfully recreates the setting of inner city slum housing and the local dialogue.

After leaving San Francisco, Bullins became the Resident Playwright and Associate Director at Robert Macbeth's New Lafayette Theatre in Harlem, New York. He also headed the Black Theatre Workshop and edited the Black Theatre Magazine while he was there. In 1969, Bullins wrote and produced We Righteous Bombers (1968) under the name of Kingsley Bass Jr. The play was extremely controversial among New York City revolutionary Marxists and black cultural nationalists who actually threatened Macbeth after he released the play in his theatre. The play is about a revolutionary unit's plan to eliminate all blacks who fight to stop the insurrectionists from overthrowing the government and the prison hangings that follow. Hay writes that the play paints revolutionaries as slogan-spouting romantics who are totally unprepared for an urban guerrilla war. We Righteous Bombers mocked the black revolutionaries in New York City and forced them to take a hard look at themselves and their activities.

In 1971, Bullins won the Obie Award for distinguished playwriting and the Black Arts Alliance Award for The Fabulous Miss Marie (1971) and In New England Winter (1969). He also received the Guggenheim Fellowship for playwriting for the first time in 1971. He earned the same fellowship again five years later. In 1975, Bullins won another Obie Award as well as the New York Drama Critics Circle Award for The Taking of Miss Janie, a play that opens and ends with rape. The play exploits sexism and looks at the loss of control and idealism. Throughout his career Bullins also received Rockefeller Foundation playwriting grants, an AUDELCO Award, and a National Endowment for the Arts playwriting grant among other awards. Bullins' other notable works include the play Goin' a Buffalo (1968), a short story collection titled The Hungered One (1971), and the novel The Reluctant Rapist (1973).

In 2006, a collection of Ed Bullins' plays, fiction, essays, and letters was published, titled Ed Bullins: Twelve Plays and Selected Writings. That same year, he was named Distinguished Artist-in-Residence at Northeastern University in Boston. Bullins received the Flora Roberts Award from the Dramatists Guild in 2007 and, at the time of this writing, continues to be active in the playwriting community.