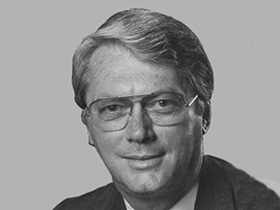 Currently a U.S. Senator, Jim Bunning pitched a perfect game for the Phillies in 1964.

Born in Southgate, Kentucky, in 1931, Jim Bunning was a major league pitcher for the Philadelphia Phillies and the Pittsburgh Pirates, among other teams. While playing for Philadelphia, Bunning pitched a perfect game in 1964. Bunning was later elected to baseball's Hall of Fame. He has since been elected to the House of Representatives and to the Senate.

On October 23, 1931, one of the greatest pitchers to ever set foot on the mound was born. That pitcher was James Paul David Bunning, more commonly referred to as "Jim Bunning." He was born in the small city of Southgate, Kentucky, which lies near the borders of Indiana and Ohio. As a youngster in northern Kentucky, Bunning fell in love with baseball. A combination of a competitive spirit and a willingness to work hard carried him on to a highly successful Major League Baseball and political career.

Bunning received his high school education from St. Xavier, a Roman Catholic parish school in Cincinnati. There he continued to grow and solidify the beliefs and values that would influence him and his decisions throughout his future political career. He was a three-sport star in high school: basketball, football, and baseball. Because of this, he had gained attention from Louisville, Miami, and Ohio for basketball, but he wanted to stay close to home. After graduating high school in 1949, Bunning chose to attend Xavier University and pursue a bachelor's degree in Economics.

While working towards his degree, Bunning also pursued his love of baseball. He received attention from the Detroit Tigers while at Xavier. He played semi-pro for a while until he finally signed a contract with the Detroit Tigers in 1955. His parents, believing that their son needed a college education to create a stable future, pressured Jim to continue his learning while playing baseball. The Tigers organization worked out a deal that would allow Jim to attend spring semester classes in lieu of spring training. The baseball world had no idea of the talent that would emerge from Jim Bunning over the next few decades.

The papers simply read, "James Bunning, son of Mr. and Mrs. Louis A. Bunning, has signed a contract with the Detroit Tigers, it was announced this week. He has been serving as the pitcher for the Bavarian Beers in the K.A.G, a semi-pro baseball league" (Dolson). He started his career making a whopping $150 a month with a signing bonus of $4,000. The only baseball millionaires of the 1950s were the owners of the clubs, not the players. Bunning, however, was satisfied because he was paid to do the thing he adored most, playing baseball.

Frank Dolson, a notable sports biographer, believes that Jim Bunning was not born to be a great pitcher. In his early career he was often told that he would not be successful with the sidearm pitching motion that would eventually become his trademark. Dolson also believed that he did not have an overpowering fastball, and Bunning himself even stated, "I didn't throw the ball 98 miles an hour...I was 90, 91, 92 tops!"

His professional career began in Richmond, Indiana, in the Class D Ohio-Indiana League. It was the lowest of the Tigers' nine minor league teams, but Richmond was an hour from home and his wife. After a 5-0 start, he realized that life in the pros was not that easy. He lost his next seven games. This would be the start of five consecutive losing seasons. The stories do not stop there. The following season Bunning was sitting in the stands between his teammate Charley Moore and Mrs. Moore in a game against the Quad City Tigers. A foul ball came drifting, heading for Mrs. Moore, when Bunning gallantly shouted, "I got it!" The ball went straight through his hands and hit him in the face. Needless to say, he never won a Gold Glove in the big leagues.

The losing streak was seemingly over after this five year span. He started to play like the potential hall-of-famer he was and was called up to the majors in 1955. His first game in the Major Leagues was on July 20. It was with the Detroit Tigers, for whom he had pitched with from 1955 to 1963. He wore the number 15 on the 1955 Tigers team, but his primary number throughout his career would be 14.

Though he started slow like most professionals, Bunning would quickly acclimate to the major leagues after being called up. He soon became a household name, and in 1957, he was chosen to be on the All-Star team. A year later on July 20, 1958, he pitched his first no-hitter against the Boston Red Sox. Even though he had a remarkable season, he was not part of the 1958 All-Star roster. The following decade, however, the All-Star game would become a common occurrence for him. When he was in Detroit, he played in the All-Star Games of 1957, 1959, 1961-1963; while in Philadelphia, he was selected for the 1964 and 1966 All-Star Games.

Bunning set one of his many marks in history on August 9, 1959, by becoming the tenth player in Major League history to have a nine-strike/three strikeout inning (Hall of Fame). If that feat were not he enough, after his first no hitter and several middling seasons later, Bunning would accomplish a feat in his era that had not been seen in 84 years — the perfect pitching performance. His perfect game against the New York Mets on June 21, 1964, was the first in the National League for nearly a century!

In 1971, Bunning retired with the Philadelphia Phillies as the number two pitcher on the all time strikeout list. He was behind the great Walter Johnson. If there was one person who was no doubt content with Bunning's decision to retire, it was his wife, Mary, whom he married while attending Xavier. During their marriage they would have five daughters and four sons.

Mary never really cared for baseball and while Jim was on the road, she was at home raising the children. While he was on the mound, she took care of the family; this essentially allowed him to focus on the game because he knew his children were cared for. She attended the baseball games only after the children were of age and even then, she only went to see her husband who was rarely around during the baseball season. Barbara, their first child, was born in 1952. This was during the midst of Jim's minor league career, the most dreaded time of his career in Mary's mind. She hated it because when tragedy struck in the form of their second child's death, he was on the road and she had no one to comfort her. Her mother and sister were there for her, and through it all she was able to keep a brave face on everything. Her composure and overall warm personality would eventually prove pivotal to Bunning's success as a politician.

After an outstanding baseball career, Bunning decided that he would give back to his country by holding a political office. Reluctantly, but ever more supportively, Mary was there to back up her husband. During Jim's political career, Mary was there to help him get through those early campaigning efforts. Public appearance is essential for holding political office and Mary had a knack for it; her enthusiasm and personality were ideal for the job of being a politician's wife.

The same qualities of perseverance and dedication that made Bunning an All-Star served him well in public office. In 1977, Bunning ran for and won a City Council seat in Fort Thomas, Kentucky. He ran as a Republican Party member. His ambitions, however, would not allow him stay as a city councilman. Two years later in 1979, he not only ran for and won a seat in the Kentucky State Legislature, but he also was elected minority leader by his republican colleagues, an extremely rare feat for a first year legislator.

Bunning did not stop at the State Legislature. After a failed election in the race for governorship of Kentucky in 1983, Bunning turned to Federal Politics. In 1986, he won the Republican nomination for Kentucky's 4th district. He was re-elected five consecutive times in what would soon become Kentucky's most Republican district. In 1995, Jim Bunning served as chairman of the House Ways and Means Subcommittee on Social Security until 1999.

Bunning was able to persevere and his aspirations led him toward the United States Senate. After Wendell Ford decided to retire after 24 years in office, Bunning ran for the Senate seat against fellow congressman Scotty Baesler. He won by only a half percentage point. He is currently serving in the Congress after winning his second bid in 2004 by a much higher margin than in 1998. He has been one of Congress' most conservative members, gaining him high marks from several conservative interest groups. He has served on a number of important committees during his tenure in office.

After falling short of election to the Hall of Fame several times, Bunning finally received the recognition he deserved. His career as a baseball player was astounding to say the least. The records he set in Detroit (1955-1963), Philadelphia (1964-1967, 1970-1971), Pittsburgh (1968-1969), and Los Angeles (1969) were immortalized when he was inducted into the Major League Baseball Hall of Fame in 1996. During his baseball career, James Bunning set the Major League benchmark for consistency throughout his career by being the first player ever in history to record 100 wins and 1,000 strikeouts in both the American and National leagues. His skill was highly respected throughout the baseball community. Jesse Gonder said this about his pitching: "He would get two strikes on you and you didn't want to be caught looking so you swung." During his marvelous career he accumulated 224 wins and was a seven-time All-Star selection.