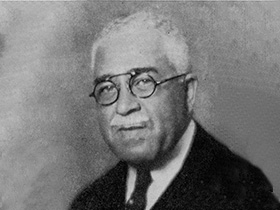 Harry Thacker Burleigh was born on December 2, 1866, in Erie, Pennsylvania. Influenced by Czech composer Antonin Dvorak, Burleigh was best known for composing Negro spirituals, religious songs that have their roots in the era of slavery. He achieved both national and international success as a composer, arranger, and performing artist prior to passing away on September 12, 1949.

Harry Thacker Burleigh was born in Erie, Pennsylvania, on December 2, 1866. For financial support, his mother Elizabeth worked as a maid while Burleigh himself, when old enough, lit street lamps and sold newspapers. No mention is made of his father in any biography. Music influenced Burleigh's life from an early age, as his grandfather taught him old slave songs that became the basis for Burleigh's later work with Negro spiritualists. Burleigh was exposed to many prominent performers, such as Rafael Joseffy, who gave recitals at the home of his mother's employer, Elizabeth Russell.

After graduating from high school in 1887, Burleigh continued to develop his musical skills while working as a stenographer for two businesses in the Erie area. In 1892, he auditioned at the National Conservatory of Music and received a scholarship to pay for his tuition. To make ends meet, he also took a job at St. George's Episcopal Church, where he met the man who was his greatest influence and future colleague, Czech composer Antonin Dvorak. Dvorak used some of the songs that Burleigh's grandfather had passed down as the basis of his symphony, From the New World, which premiered in 1893. Burleigh also sang in one of Dvorak's arrangements of Pennsylvania native Stephen C. Foster's Old Folks at Home in 1894.

In 1896, Burleigh graduated from the conservatory and married poet Louise Alston two years later. Their son, Alston, was born in 1899, a year that proved to be important to Burleigh's career. Between 1899 and 1900, three of Burleigh's early songs were published by G. Schirmer, Burleigh became an editor for G. Ricordi, and he became the first African-American soloist for the prosperous New York synagogue, Temple Emanu-El. In the following years, Burleigh entered into the academic community, lecturing at many black colleges throughout the nation.

Burleigh served on the faculty of the National Conservatory of Music for several years as well as receiving honorary degrees from both Howard and Atlanta Universities. He acted as a baritone soloist for St. George's Episcopal Church from 1894-1946 and a soloist for Temple Emanu-El from 1900-1925. Burleigh was also a founding member of the American Society of Composers, Authors, and Publishers (ASCAP), and had successful careers as a touring artist, composer, arranger, teacher, and editor.

It is estimated, according to www.afrovoices.com, that Burleigh composed between 200 and 300 songs over his lifetime. He is known for his spiritual arrangements, most notably his 1916 arrangement, Deep River (1916). Other notable works include "Jean" (1903), "Ethiopia Saluting the Colors"(1915), and "Swing Low, Sweet Chariot"(1917).

Burleigh retired in 1946 because of illness. Concerned about his father's health, Alston moved him into a nursing home in Stamford, Connecticut, in 1948. Burleigh died of heart failure on September 12, 1949, at the age of 82.