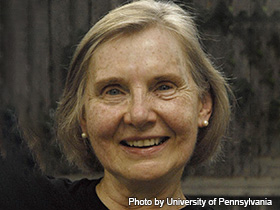 Philadelphia poet, Deborah Burnham was selected as one of the Pennsylvania Center for the Book's 2002 Public Poetry Project poets.

Born on March 7, 1948, in Huntington, West Virginia, Deborah Burnham is a poet known for her clear and positive poetry. She earned her BA from the College of Wooster in Ohio in 1970 and her PhD in Modern British and American Literature from the University of Pennsylvania in 1989. In 1995, she won the Texas Tech University Press Poetry Award, an annual poetry prize that resulted in the publication of her first collection, Anna and the Steel Mill. In 2002, her poem Fire in the Onion Field was selected for publication by the Public Poetry Project of the Pennsylvania Center for the Book. Among her works include her chapbook Still (2008), and at the time of this writing Burnham serves as the Associate Undergraduate Chair of the English Department at the University of Pennsylvania.

Deborah Burnham was born in Huntington, West Virginia, on March 7, 1948. She began her scholarly pursuits at the College of Wooster in Ohio in history and literature. But Burnham craved the city life; to her the city represented a "shaping place." After living in the quiet and rural Lake Erie area of Ohio, Burnham decided to move to Philadelphia and accepted a full scholarship at the University of Pennsylvania to work on her PhD in Modern British and American Literature.

Inspired by Theodore Roethke, a poet and professor of English at Pennsylvania State University (formerly College) from 1936 to 1943, Burnham decided to analyze his poetry in her dissertation. Burnham had been pondering how to read Roethke's work since she was eighteen. After coming across a blurry photocopied image of one of Roethke's original handwritten manuscripts, Burnham initially decided to look at his printed works, since sorting through his scrawl could prove difficult. However, when she looked at the microfilms of his journals, she discovered "his handwriting was as clear as an elementary school teacher's."

After this discovery, Burnham interpreted the work from Roethke's own hand. His journals revealed how Roethke had made himself a better poet by effort and practice. This research gave Burnham a new outlook on her own poetry, confirming her sense that poetry "is not a machine." Burnham, who had always been interested in the genesis of a poem, found that the way Roethke pushed himself—"[teaching] himself to write poetry" by trial and error—fascinated her. This fed her interest in composition and nurtured the growth of her own writing.

In 1995, Dr. Burnham won the Texas Tech University Press Poetry Award for her collection of poems, Anna and the Steel Mill. This book illustrates what she defines as her genre: "meditative poetry" as part of the "main-stream narrative." The best known of the poem from this collection is "Spare Change":

Crossing Spruce Street, I was bending like a peddler
under my laundry and three loaves of day-old bread.
She held her sleeping daughter, asked for change for milk,
and diapers to soak up what the baby couldn't use.
I'd spent my change on laundry tokens, flat imitations
Rattling in my hand. I offered bread; she needed cash;
we stared at the broken street, as if we hoped to see
a tale spread with laundered white, with knives and baskets
ready for the strong bread that, broken open,
would release a blessing in the smell of yeast.


Burnham says she does not "write about [mortality] as a long painful thing," as many writers and poets do today. She describes herself as a "glass half-full kind of person," and she allows this belief to show in her work. She defines her poems as "straight-forward" because after many years of academic writing she holds clarity as a value.

Burnham's poem "Fire in the Onion Field" was selected for publication by the Public Poetry Project of the Pennsylvania Center for the Book in 2002.

She is a National Endowment for the Arts grant recipient, and her 2008 chapbook Still was a runner-up for the 2007 Keystone Chapbook Prize awarded by Seven Kitchens Press.

At the University of Pennsylvania, she has directed the University Scholars Program and served as an Assistant Dean in the College Advising Office. For over twenty summers, she also directed and taught in the Creative Writing program at the Pennsylvania Governor's School for the Arts.

At the time of this writing, Deborah Burnham is the Associate Undergraduate Chair of the English Department at the University of Pennsylvania. She teaches courses in American and British Fiction, Gender Studies, Poetry, Poetry Writing, and Nonfiction Prose & Poetry Writing. She also created a freshman seminar on Philadelphia Poetry to introduce the lively poetic culture of the city to new students. She has also been a member of the poetry board for the literary magazine Philadelphia Stories.

According to her University of Pennsylvania faculty profile, [Burnham] has lived in the Powelton neighborhood of Philadelphia for over twenty-five years and is currently a member of the executive board of the Powelton Village Civic Association. An enthusiastic gardener, she has created several small gardens on Philadelphia streets, most notably near the Irongate Theater at 37th and Chestnut Street.