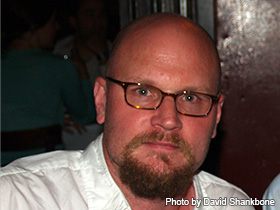 Augusten Burroughs was born on October 23, 1965, in Pittsburgh, Pennsylvania, as Christopher Robison. His harsh upbringing inspired his most famous work Running with Scissors (2002), a memoir that landed him on the New York Times Bestseller list. Running with Scissors was turned into a 2006 film of the same name. He has written additional memoirs, including a collection of stories for Christmas and Lust & Wonder (2016), which have all been New York Times Bestsellers.

Augusten Xon Burroughs was born on October 23, 1965 in Pittsburgh, Pennsylvania, with the name Christopher Robison. His parents were Margaret Robison and the late James G. Robison. His father worked at the University of Massachusetts-Amherst as the head of the Philosophy Department and his mother is a writer and poet. His brother, John Elder Robison, is a New York Times Bestselling author.

Burroughs dropped out of school in the sixth grade; at age 17, he received his GED in Computer Programming and System's Analysis and Design, and at age 18 he officially changed his name to Augusten Xon Burroughs. According to his website, instead of working in the technology industry, Burroughs moved to San Francisco and got a job in the advertising industry, becoming the youngest copywriter in the city at nineteen. In 1989, he was invited to work for Ogivy & Mather in New York and over time worked his way up to high-paying positions and maintained a successful advertising career for nearly 18 years. He left the industry to pursue his aspirations as a writer.

His first book, Sellevision (2000), is a story that centers on a few people who are all affiliated with a home shopping network called Sellevision. The book got mixed reviews from people who praised it, such as Bret Easton Ellis and people who panned it such as Brian Raferty of Entertainment Weekly who said, "Burroughs may have tuned into a fine target, but his humor—is there anything more lame than a running Celine Dion joke?—leaves Sellevision with fuzzy reception." It was a rough start, but Burroughs did not stop there—the book has since been considered for a TV series adaptation.

His next book was the memoir Running with Scissors (2002), which was loved by every critic and instantly jumped onto the New York Times Bestseller list where it stayed for 150 weeks. The book focuses on Burroughs' childhood and teenage years, telling all about his parents' trouble and the time he spent with the Turcotte family (their name was changed to Finch in the book). As online book reviewer Amanda Cuda states, "It's not a comforting read, but it is a fascinating, disturbing and, yes, funny one, proving that humor may not relieve pain entirely, but can make it easier to bear." The Turcotte family, according to Vanity Fair, was outraged by the memoir and sued. The book was eventually optioned and made into a feature film of the same name, written and directed by Ryan Murphy and starring Alec Baldwin, Annette Benning, Brian Cox, Even Rachel Wood, Joseph Fiennes, Gwyneth Paltrow, and Joseph Cross as Augusten Burroughs. Burroughs, as himself, makes a small appearance at the end of the film next to the actor who portrayed him. The film received mixed reviews. A.O. Scott of the New York Times states, "Despite the tale's undeniably horrific elements, Mr. Murphy conveys little sense of real anguish or danger, and he holds the characters at arm's length."

In 2004, Entertainment Weekly ranked him at number 15 on their list of "The 25 Funniest People in America." This is quite an honor as the list contains actors, comedians, and writers.

Burroughs has gone on to write five more memoirs. Dry (2004), about his experiences with alcoholism; Magical Thinking (2005) and Possible Side Effects (2007), which are both collections of essays; A Wolf at the Table (2008), about his relationship with his father; and You Better Not Cry: Stories for Christmas (2010). All have graced the New York Times Bestseller list. Magical Thinking is described by the Picador web page as, "True stories that give voice to the thoughts we all have but dare not mention," and they describe Possible Side Effects as, "A collection that is universal in its appeal and unabashedly intimate, Possible Side Effects continues to explore that which is most personal, mirthful, disturbing, and cherished, with unmatched audacity."

On Burroughs' website, he states that he currently lives in New York City with husband and literary agent Christopher Schelling and wrote about their relationship and wedding in Losing a 'Boyfriend,' the Best Way Possible, which appeared in The New York Times in 2013. As for his relationship with his mother, according to a National Public Radio (NPR) interview, his mother has said that "Though her son Augusten Burroughs lives a short distance away...she hasn't seen him in several years."

In 2015, Augusten Burroughs' Two-Minute Mansion was illustrated by Dennis Eriksson and included in the Chipotle Mexican Grill's Cultivating Thought Author Series, in which stories, designs, and ideas are printed on cups and bags given to customers. In 2013, he received a Lambda Literary Award.