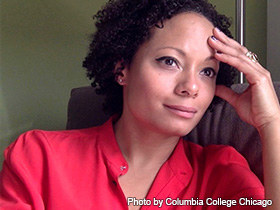 Poet and former University of Pittsburgh instructor CM Burroughs was featured in the 2008 Public Poetry Project.

A native of Atlanta, CM Burroughs moved to Pittsburgh to study and teach writing at the University of Pittsburgh. Her poetry has been published in journals, reviews and anthologies, and her readings have been featured at art galleries and on the airwaves. Her work has appeared in various literary journals and periodicals, as well as anthologies, including Only the Sea Keeps and Gathering Ground. Museums have commissioned her to write in response to artwork and have hosted her readings. Her first book of poems, The Vital System, was published in 2012. At the time of this writing, Burroughs lives in Chicago, where she serves as an Assistant Professor of Poetry at Columbia College Chicago.

CM Burroughs was born in Atlanta to Robert A. Burroughs, an attorney, and his wife LaVerne, an educator. From an early age, she wrote for her own enjoyment. By the time she turned 12 years old, she was writing poems as a way to speak publicly about her private concerns.

When not involved in academics, Burroughs writes and publicly reads poetry. Her work was first published in the Fall 2002 edition of Wabash Review, and has since appeared in such journals and periodicals as Bat City Review, Pittsburgh City Paper, jubilat, Ploughshares, VOLT, and Sou'wester. Her poetry has been featured in several anthologies, including Cave Canem's 10x10 series, Cave Canem Anthology 2004, Only the Sea Keep: Poetry of the Tsunami (2005), and Gathering Ground: A Reader Celebrating Cave Canem's First Decade (2006). She has also read her work at the Warhol and Mattress Factory art museums in Pittsburgh and at the Studio Museum in Harlem, among other galleries.

Burroughs is a fellow of Callaloo and Cave Canem, organizations which focus on educating and publishing African American poets and writers. The latter was founded in 1996 as an all-volunteer summer workshop and has grown into a nonprofit organization with a full-time staff for its established and emerging poets. As one of only 54 fellows selected annually, Burroughs studied with Cave Canem faculty over three week-long summer residencies in 2004, 2006, and 2008. CM has also been awarded fellowships and grants from Yaddo, The MacDowell Colony, Virginia Center for the Creative Arts, the University of Pittsburgh, and Idyllwild Arts, and has received commissions from the Studio Museum of Harlem and the Warhol Museum to create poetry in response to art installations.

During an interview with independent Pittsburgh radio station WYEP, she said her artistic interests stem from actual life, not the existential poetry found in many publications. According to the interview, she was asked by Cave Canem to write about politics, race, and the "gritty" side of life for a project about vulnerable bodies. She relished the opportunity to explore her adopted hometown of Pittsburgh through her work, as exhibited by her themes of race in the city.

Burroughs enjoyed living in Pittsburgh, and during her residency there said, "I explain my affinity to Pittsburgh as an affinity to how I move through the city—essentially, I love walking from one place to another, ever interacting with my environment and the people who've occupied it before me... It's my reminder that I've made my home of a place that is very different from the place that formed my childhood." She evokes subtle acts of racism from her own experiences, as well as acts of kindness, and acts of quiet courage, in what she calls "flashes of scenes." She takes a cinematic approach to poetry, opting to forego linear narrative when an imagery-heavy slice of a bigger issue can convey her story.

Her also uses restraint and pauses in her poetry. "I love that silence can fill a space so the readers can insert their own language," she said. With each poem, she strives to offer some insight or emotional spark, but views the medium as an equal exchange between writer and audience.

Regular themes in Burroughs' poems include race, nationalism, nature, love, and gender. Much of her recent work delves into the vulnerability of the human body, which she sees as a universal phenomenon. "Everyone, everyone is in danger, in peril, at some point and in some way in their lives, no matter ... how you grew up," she said on-air.

In 2008, Burroughs self-published her chapbook, I, I, I..., and in 2012 her first full-length collection, The Vital System, was published by Tulepo Press. Author Laurie Sheck says of Vital System, "CM Burroughs's provocative first collection enacts the ways in which the very nature of thought is brokenness and disruption. ... If the word 'I' is in itself both an infected and glorious thing, how are we to think of it?—this is one of the compelling questions implicit at the heart of this book so full of vivid cusps and strivings."

Burroughs' poem, "Artist's Delight," was selected for publication by the Public Poetry Project of the Pennsylvania Center for the Book in 2008.

In 2009, she was selected as a Gift of Freedom Finalist by A Room of Her Own Foundation and was awarded $5,000 to work on a project about death and the loss of her younger sister in 1998. Burroughs has said that it had taken her 10 years to even broach the topic in writing, but she has since reached this point in the "maze to the self."

At the time of this writing, CM Burroughs lives in Chicago, where she serves as an Assistant Professor of Poetry at Columbia College Chicago.