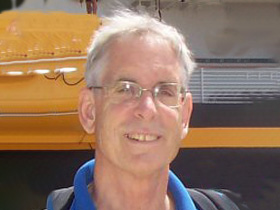 Poet Christopher Bursk was born in Cambridge, Massachusetts, in 1943. He is the author of several poetry collections that blend his enthusiasm for the written word with his enthusiasm for social activism. He has won a number of awards for his poetry and humanitarian efforts, including being named Bucks County Poet Laureate in 1978, winning the Bright Hill Chapbook Competition in 2011, and being awarded the Bucks County Community Foundation Education Award in 2013. In 2007, his poem Does Poetry Matter? was selected for publication by the Public Poetry Project of the Pennsylvania Center for the Book. At the time of this writing, Bursk continues to serve as a Professor of Language and Literature at Bucks County Community College in Newtown, Pennsylvania.

Christopher Bursk was born in Cambridge, Massachusetts, on April 23, 1943, to Edward and Catherine Bursk. He received his BA from Tufts University in 1965, his PhD from Boston University in 1975, and his MFA from Warren Wilson College in 1988. He married Mary Ann Adzarito in 1967, and they had three children — Christian, Norabeth, and Justin.

Bursk was a professor at Shaw University in North Carolina from 1968 to 1969, and then moved on to teach at Bucks County Community College in 1970. Since that time, Bursk has become one of the most popular professors on campus, where he continues to work as a Professor of Language and Literature.

In 1978, Bursk published his first volume of poetry, entitled Standing Watch (1978), and was named Bucks County's Poet Laureate. The significance of this honor prompted him to teach a creative writing course at Bucks County prison, a volunteering endeavor that he has continued for over thirty years. Bursk, who claims that "poetry is the only argument I know to offer against prison and all it represents," based his poetry collection, Cell Count (1997), on his volunteer work in the correctional system.

Bursk has also donated his time to food banks and women's shelters. His third collection of poems, Places of Comfort, Places of Justice (1987), was dedicated to A Woman's Place, a shelter for the victims of domestic abuse. According to The Virginia Quarterly Review, in the book, Bursk's "painful... near-Gothic" poetry brings readers back "to the wellsprings of [Bursk's] search for comfort and justice—the need to compensate, mostly in the realm of wishful imagination, for a childhood shadowed by his mother's madness."

His tendency to write poetry inspired by social issues sets Bursk apart from other poets. "I find I write books - I don't write poems," he says. His approach of writing on these themes naturally informs his work with added layers of compassion and understanding.

On balancing his writing and social activism, Bursk says "It's always been a [question] in my life how much I dare give myself permission to write. People are struggling. . . . How dare I write? I should be out working for social change, counseling, and raising money." He credits his interest in social activism to his mother, who was institutionalized in the 1940s yet still continued to volunteer: "Seeing my mother in pain helped me to be open to others in pain. In my poetry, as in my activism, I wanted to fight that." To help further his goals for social change, Bursk donates some of the profits earned from his books to social organizations.

In 2004, Bursk's The Improbable Swervings of Atoms received the Donald Hall Prize in poetry, which offers publication to the best book-length manuscript of poetry. This same collection also won the Milton Kessler Poetry Book Award in 2006.

Brenda Miller, editor of Bellingham Review, awarded Bursk the 49th Parallel Poetry Award in 2004 for his "wildly witty poem 'E Pluribus Unum,'" and his book The First Inhabitants of Arcadia won first for the Paterson Poetry Prize in 2007. Bursk's poetry has received much acclaim, including publication in such literary journals as Paris Review, American Poetry Review, Poetry, Manhattan Review, the Sun, and more.

His poem "Does Poetry Matter?" -- from Cell Count -- was selected for publication by the Public Poetry Project of the Pennsylvania Center for the Book in 2007.

The Infatuations and Infidelities of Pronouns, a series of sonnets after Shakespeare by Bursk, won the Bright Hill Chapbook competition in 2011. "Of necessity, and natural bent," reviewer George Drew says of Bursk and his writing, "he is a high roller of risk. Who else would dare to riff on Shakespeare's sonnets in such an audacious, irreverent, witty and pronoun-nuanced way? If you like your sex complicatedly raw, your adolescence complicatedly ture, your Shakespeare respectfully adulterated, and most important, your language and poetics bluntly articulate...then, dear reader, this is the book for you.

Known for his passionate work and compassion towards colleagues, students, and college donors, Bursk was recognized by the Bucks County Community Foundation with an Educational Award (2013). In the community, he advocates poetry readings, supports scholarships (many to memorialize students and colleagues who have passed on), and serves as co-director of the Bucks County Poet Laureate Program. He has been honored in the past by the Lindback Distinguished Teaching Award and the college's "Above and Beyond" Faculty Award. On separate occasions, he has been named both the humanitarian and the citizen of the year for Bucks County.

At the time of this writing, Christopher Bursk continues to advocate for social change and serve as a Professor of Language and Literature at Bucks County Community College. Sy Safransky, editor of The Sun, says of Bursk's 2017 collection A Car Stops And A Door Opens: ...his love of language is palpable. You can tell he chooses each word carefully, yet the overall effect is of a flowing conversation. It's a conversation that's sometimes uncomfortably direct--say, when he explores the darker side of sexual desire--but his humility and generosity of spirit make him an always-trustworthy guide.