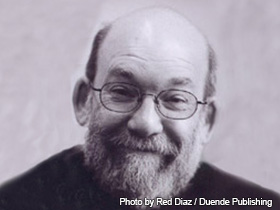 Frederick Busch was born on August 1, 1941, in Brooklyn, New York. He earned a Bachelor of Arts degree in English from Muhlenberg College in 1962. In 1963, he married Judith Burroughs with whom he had two sons. In 1966, he became a professor at Colgate University, and in 1967 he completed his master's degree from Columbia University. Following these accomplishments, he completed and published his first novel in 1971, I Wanted a Year without Fall. Busch continued to write through his lifetime, publishing over twenty novels as well as numerous short stories until his death in 2006.

Frederick Busch was born August 1, 1941, in Brooklyn, New York to Benjamin and Phyllis Busch. Busch obtained his first degree, a Bachelor of Arts in English from Muhlenberg College in 1962. After graduating, he decided to continue his education at Columbia University to earn a master's degree in seventeenth-century English literature. This portion of his education was paid for by the Woodrow Wilson National Fellowship given for the promise he showed in the field. Before completing his degree, however, he left the University in 1963 to work as a clerk in multiple market research firms and began to focus on his writing by first writing for a public relations feature-article syndicate and then for a magazine entitled School Management until 1965. In 1963, Busch married Judith Burroughs in November with whom he has two sons, Benjamin and Nicholas.

In 1966, Busch started his career as a professor at Colgate University. The year after he started teaching at Colgate, he completed his master's degree from Columbia with a thesis on the fiction of the wellknown author John Hawkes. Through all of these educational achievements, Busch continued to write fiction and published his first novel in 1971 entitled, I Wanted a Year without Fall. According critic Donald Greiner, this work, "...is an acceptable beginning." After completing his first novel Busch grew as a writer and kept publishing his work.

In 1973, he published Breathing Trouble and Other Stories, which was followed in 1974 by Manual Labor, a novel in which a husband and wife mourn the loss of their child. Also in 1974, Busch became poetry editor for the Carleton Miscellany, a position he held for two years. He was then awarded a fellowship from the National Endowment of the Arts in 1976, and in 1977 he visited the University of Iowa as a lecturer for the creative writing program to which he became the director of for the following two years. Along with being a visiting professor at the University of Iowa for these two years, he was also the fiction editor for the Iowa Review. In the fall of 1979, he left Iowa to teach at Columbia University as well as to continue teaching at Colgate University. He taught at Columbia for only a year, but continued to teach at Colgate becoming the Fairchild Professor of Literature (1987-2003), a great honor displaying his knowledge in the field, followed by his retirement as a professor emeritus.

Through all of his travels Busch continued to write; in 1976 he published, Domestic Particulars: A Family Chronicle, a work that reportedly took him over a decade to complete and that focused on overcoming family turmoil. Following this, Busch published The Mutual Friend in 1978, and in 1979, Rounds. The Mutual Friend is a historical fiction novel about the celebrated author Charles Dickens, while Rounds is the story of a small town doctor and the many dramatic struggles in his life. Greiner writes that Rounds was, "Busch's strongest novel because it combines the emotional intensity of Manual Labor and Domestic Particulars, the astonishingly accurate detail of The Mutual Friend, and the convincing fleshing out of voices with characters whose determination to come to grips with the confrontation of love and death endows them with dignity and grace."

The story of a husband and wife taking on the daily struggles of dealing with their illegitimate son, Take This Man was published in 1981 and was one of Busch's less noted works, but despite this it was still a great year for him as he was given multiple honors, the Guggenheim Foundation Fellowship as well as the National Jewish Book Award for Fiction by the Jewish Book Council. He held both of these honors for two years. Following this, Busch published Invisible Mending (1984) and Sometimes I Live in the Country (1986) before he was honored yet again in 1986. He was given the American Academy of Arts and Letters of Fiction Award as well as the Malamud Award, both honoring his excellence in the art of short story.

Taking a break in publishing for three years his next two novels came out in 1989, Absent Friends and War Babies. Absent Friends is a collection of short stories dealing with the themes of love and lose, on the other hand War Babies is a novel addressing the same themes. Busch continued to publish novels almost every year as well as short stories and other publications, and in 1995 received a nomination for the Faulkner Award, an award for the best published fiction, for his work, The Children in the Woods: New and Selected Stories (1994). This collection of stories focused on the deterioration of relationships.

After his lifetime achievement award Busch began to slow down, completing only two more titles: A Memory of War in 2003, the story of a psychoanalyst who becomes overwhelmed by his past, and Night in 2005, which was the sequel to his earlier work Girls, before his death in 2006. He died of a heart attack on February 23 and was remembered as a "Writer's Writer." This came to be because, although he was a highly honored and respected writer within his field, his works never really got the honor they deserved by the public. Fellow novelist Scott Spencer stated he was "a first rate American storyteller," along with Washington Post book critic Jonathan Yardley who stated he was "a serious and gifted artist."