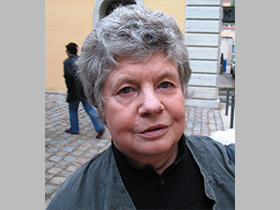 A one-time student at Bryn Mawr, novelist A.S. Byatt won the Booker Prize in 1990 for Possession.

A. S. Byatt was born on August 24, 1936 to a family of Yorkshire academics. She studied at Cambridge University, where she began working on her first novel, The Shadow of the Sun. After doing unfinished graduate work at both Bryn Mawr College and Oxford University, she married Ian Byatt. Her younger sister, Margaret Drabble, rose to literary fame much earlier than she did, causing a rift between the two writers. Byatt continued to publish fiction while pursuing a prestigious academic career and working as a senior lecturer at University College London. In 1990, her novel Possession won the Booker Prize, bringing her international recognition. In 1998, she was given the title of "Dame" by the Queen.

When A. S. Byatt was working on her Ph.D. at Oxford, her supervisor told her, "My dear, every young girl with a first-class degree expects to be able to write a good novel. None of them can." The British author, who studied at Bryn Mawr in Pennsylvania in 1957, has been accused of being many things, from a bluestocking to a "melodramatic pedant." However, her inclusion on the Times' 2008 list of the "50 Greatest British Authors Since 1945" might give her supervisor reason to reconsider.

Antonia Susan Byatt was born on August 24, 1936 to two Cambridge University alumni, John Drabble and Kathleen Bloor, in Sheffield, Yorkshire. At the age of five, her mother told her, "Of course, you will go to Cambridge." In 1954, Byatt did, just like her three siblings. Three of the four children were girls, and had spent years watching their mother rage about being stuck in the kitchen, which Byatt says "destroyed and damaged something essential in our mother." One of those other girls was Byatt's sister Margaret Drabble, who rose to literary fame long before Byatt did, causing a fault line between the two sisters which still occasionally rumbles. Byatt describes a childhood where everyone quoted poetry to each other and the house was chock-full of books, but she remains skittish about declaring any sort of wholesome family identity. "Anything communal," noted interviewer Marianne Brace of The Guardian, "from love-ins to political parties — fills her with horror."

At Cambridge, Byatt struggled between her literary ambition and her personal desires. "We [female students] wanted weddings and romantic love and sex, and we wanted to be normal," she wrote. "We had fought, much harder than the men, who outnumbered us eleven to one, to study at Cambridge, and we were fatally torn...Men could have both, work and love, but it seemed that women couldn't." Her first novel, The Shadow of the Sun began while in lecture and in between love affairs, deals with the same dilemma that she faced. She recalls scribbling frantically on it during a lecture, "so busily that the lecturer looked fixedly at what must have seemed to him an earnest female acolyte and remarked sharply, 'You don't need to take all that down. It's not that interesting.'" After dropping out of her graduate program at Bryn Mawr, she began working towards her Ph. D. at Oxford, where she met Ian Byatt. They were married in 1959, and she had her grant pulled as a consequence — a sharp contrast to the experience of newly-married male students, who had their grants increased because they were expected to provide for their families. She found herself suddenly a "desperate faculty wife" at the age of 25, with two children born in the space of two years. She thought she was already old and "past it", but she wrote rocking her son with hand, "fiercely, with a new desperation." Byatt wrote that part of the idea behind her title was that the sun has no shadow. "You have to be the sun or nothing." Byatt eventually divorced her husband and remarried in 1968, this time to a financial specialist named Peter Duffy. Still, Byatt told People magazine, "My best relationships are with other writers. In many ways, I know George Eliot better than I know my husband."

Many of her subsequent novels similarly feature young, wildly intelligent female protagonists fighting to be taken seriously, but Byatt adamantly denies membership to the feminist literary movement. Her disdain for groups and for toeing the party line has given Byatt a rocky relationship with the feminist movement, though a glance at her experiences seems to guarantee her an automatic welcome to the club. She complained to Marianne Brace that when the women's movement turned to the realm of literature, it tried to force a sort of "group prescription or what you ought to be writing about — for women, by women, about women." The result, she says, was generation of fantastic male novelists like Salman Rushdie, Ian McEwan, and Kazuo Ishiguro — and "a lot of women who seemed content to write about what lesbians felt in their women's groups." When her most famous novel, Possession, won the Booker Prize in 1990, Byatt was begged by American and British publishers to make the book more accessible by removing its large sections of poetry and correspondence, so they could bill it as more romantic. She almost despaired, thinking, "You're just going to have to give up and write women's-novely novels." But in her recent work, Byatt shows no signs of relenting, still writing books that are determinedly obtuse and politically ambiguous. When she received complaints from female readers who felt her description of a sexual harassment that led to suicide in The Matisse Stories should have it made it clearer that the male perpetrator was absolutely bad and the female victim was absolutely good, Byatt responded, "I'm not in the business of Bible-thumping. The lives of women are very complicated."

After The Shadow of the Sun, Byatt began a quartet of novels about an eccentric, academic Yorkshire family, centering on youngest daughter Frederica Potter. The first, The Virgin in the Garden, was released in 1978, and was followed by Still Life, Babel Tower, and A Whistling Woman. But until the fame inspired by her Booker, Byatt was known mostly as an obscure literary critic who wrote similarly obscure and incomprehensible fiction — or as "Margaret Drabble's older sister." Byatt believes the rivalry between the two of them began as early as age ten. When she began writing, "I always felt as though somebody were sort of breathing on my heels and whatever I did was not quite good enough." The tables turned with Possession, a thick novel about two Victorian scholars tracing the unexpected romance of two poets, who find themselves and their personal lives caught up in the search for their historical counterpoints. When Byatt won the Booker, Drabble rushed up to her to congratulate her, saying that she'd put money on Byatt winning. However, British journalist reported later that Drabble had told someone in the audience that if Byatt won, she'd make some money, and if not? She'd be happy.

A long career as academic and a senior lecturer at University College London spills over into her creative work, prodding some reviewers over the edge. "Have you read as widely as A. S. Byatt? If not, her new novel, "The Biographer's Tale, will soon find you out," wrote Hermione Lee in a review instructing Byatt to "just get a life." The novel in question, Lee complained, made references to "Empedocles, Lacan, Frankenstein, Freud, Foucault, Heraclitus, Tolkien, T. S. Eliot, Donne, and Marvel" — and that was just the opening two pages. Ron Charles of The Christian Science Monitor wrote, "Entering a novel by A.S. Byatt is like going to a party of very smart people. The initial thrill of mingling with such brilliance is tempered by the nagging sense of one's relative stupidity." Another reviewer, Stuart Evers of The Guardian, complained "I'm allergic to A. S. Byatt," recalling wading through a university reading list full of "turgid religious Victoriana" and pinning all his hopes on Byatt, the one name on the list he recognized. To his dismay, he soon found that "reading it was like holding my own personal kryptonite." Years later, he tried his hand at another Byatt novel, The Children's Book, but found it "deeply, deeply irritating. The didactic nature of the narration, where everything is described in exacting, exhausting detail, was bad enough, and that's before you factor in the stilted dialogue and pleased-with-itself research-spouting."

Byatt grows increasingly more frustrated with accusations that her books, and herself by extension, are elitist, overly intellectual, arrogant, or cold. "Everyone believes that if you think, you don't feel. But all my novels are about joining thinking and feeling," she wrote. In an interview with Sam Leith of The Guardian, Byatt told a story about a reading she gave at university, where a student stood up and asked "You used a word I didn't know in that reading. Don't you think that was elitist of you?" Byatt replied that if it were her, she would have been delighted to have the opportunity to rush to the dictionary. All her childhood heroes, claims Byatt, wrote long sentences. In addition to the royal "Dame" conferred on her in 1998, the asthmatic child who hid in the school boiler room to avoid gym glass is now given titles like "the patron saint of bookworms."

On an essay on her first unsure protagonist in The Shadow of the Sun, Byatt wrote, "I always knew, as my heroine didn't, that I must contrive to work (to think, to write)." Through two marriages and three children, she continued to work. It wasn't until age 54 that she experienced what she called her happiest moment. "I found myself alone in this house, and there was total silence, and the sun was absolutely blazing, and I walked up and down the stairs absolutely boiling with the sense that I belonged to myself, and could finish any thought."