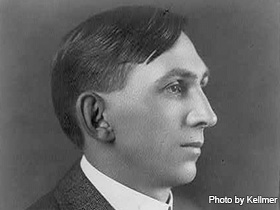 Johnstown-born composer Charles Wakefield Cadman is best known for the Native American influences in his music.

Charles Wakefield Cadman was born on December 24, 1881, in Johnstown, Pennsylvania. He was born into a musical family and learned to play the piano at a young age. He started his career as a church organist before pursuing an interest in Native American Music. From the Land of the Sky Blue Water is his most famous piece. He spent most of his life living in Los Angeles, California. Cadman was a good friend and passionate worker up until his death on December 30, 1946.

Charles Wakefield Cadman was born on Christmas Eve in 1881 in Johnstown, Pennsylvania. He was born to William and Caroline Cadman. From the beginning, he had a musical background. His great-grandfather, Samuel Wakefield, built the first pipe organ west of the Alleghenies. He began his musical studies at a young age under such masters as Leo Oehmler, W.K. Steiver, and Luigi von Kunits. To earn a living, he worked as a messenger in the Carnegie steel mills of Pittsburgh. He lived as a starving artist. After he left the steel mills, he worked as a church organist and sold simple compositions door to door in Pittsburgh. Throughout his early years he held many odd musical jobs. Cadman was a keyboard repairman, an accompanist, and a critic for the Pittsburgh Dispatch.

He began composing for organ and ballads in 1904. In 1908, he began to shift his themes from regular forms to music of the American Indian. The songs of the Omaha Indians captured him and he began to compose. Unfortunately, his efforts were halted in 1910 when his health took a turn for the worse. It did not improve until he moved to the warmer climates of New Mexico and Colorado. Upon the return of his health, he joined efforts with American poetess Nelle Richmond Eberhardt. Together, they took the rituals and music of the Native Americans and brought them to the general public. He educated the public about the natives. From 1909 to 1916, he toured the nation giving performances with an Indian Princess named Tsianina Redfeather in tow. Cadman became very famous and sought out for his Native American Music seminars. He wrote an opera about a woman named Shanewis and it was the first opera to be performed at the New York Metropolitan Opera for two seasons in a row. In 1912, he composed one of his most famous pieces called From Land of the Sky Blue Water.

By 1915, Charles Cadman Wakefield had settled himself in Southern California. In that same year he started the Congress for the Encouragement of American Music. He was a major activist of the preservation of music written by Americans. In 1924, he was inducted as a life-time member into the American Federation of Musicians. "Charlie" (as he was called by friends) was also an early member of the American Society of Composers, Authors, and Publishers. A little known fact was that he was granted his doctorate in music by both the University of Southern California and the University of Denver.

As the roaring twenties began, Cadman moved away from the Native American genre of music he had grown to cherish. He wrote two major operas: The Garden of Mystery (1925) and Witch of Salem (1926). Unfortunately, since his claim to fame was Native American music not many publishers wanted to look at his new works that did not focus on Native American themed music.

He moved to Los Angeles in 1938. For the last eight years of his life, he mainly focused on symphonic works for the San Francisco Symphony. Until the very end of his life, he remained a close friend of the poet Nelle Eberhardt. To all who knew him, he was a good man with the best of dispositions even at his lowest points. He died in Los Angeles on December 30, 1946. Cadman truly lived the American dream, bringing himself from rags to riches. He even has a holiday named after him in Southern California. It is held on September 4th and is known as Cadman Day.