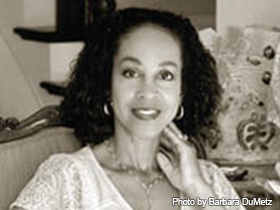 Novelist Bebe Moore Campbell was born in Philadelphia and advocated for social issues, such as mental illness, through her work.

Bebe Moore Campbell was born to George and Doris Campbell in Philadelphia, Pennsylvania, on February 18, 1950. Growing up in a home where her parents were separated, Campbell lived with both parents; with her mother in Pennsylvania and father in North Carolina. She graduated from the University of Pittsburgh with a Bachelor of Science degree in Elementary Education and worked as an elementary and middle school teacher for several years before beginning her literary career. She had a son and daughter, Ellis Gordon III and Maia Campbell. Bebe Moore Campbell died of neurological brain complications at age fifty-six in Los Angeles on November 27, 2006.

Elizabeth "Bebe" Moore Campbell was born on February 18, 1950, in Philadelphia. Growing up as an only child of a separated couple, Campbell spent time living with both her parents, staying with her mother Doris in the summer in Philadelphia, and with her father, George in North Carolina. Campbell had close relationships with both her parents, but especially with her father George. The close ties that she had with her family members is shown and deeply expressed in some of her early works. While living with both parents in Pennsylvania and North Carolina, Elizabeth Bebe Moore Campbell attended the University of Pittsburgh, where she earned a Bachelor of Science degree in Elementary Education. She taught elementary and middle school for several years until she began to pursue a new career path in the literary world.

She was married to Ellis Gordon Jr. for twenty-two years and moved to Los Angeles, California, where she started her family. Campbell along with husband Ellis had a son, Ellis Gordon III. Campbell was later divorced and married to Tiko Campbell, whom she also later became divorced from, but had a daughter, Maia Campbell.

Bebe Moore Campbell had a somewhat unusual childhood, growing up in both the North and the South and much of this experience is reflected in her literary work. Campbell saw first hand the issues of segregation in the North and the South. Experiencing segregation and racism prompted Campbell to write many of her literary works on such issues. One of her works that received much praise and acclamation, was, Sweet Summer: Growing Up With and Without My Dad (1989). Campbell quickly gained fame in the world of literature with her strong and powerful works. Beyond her bestselling novels, Campbell was a commentator for the National Public Radio (NPR), as well as a writer for numerous wellknown and highly esteemed newspapers and magazines including, The New York Times, The Washington Post, the Los Angeles Times, USA Today Weekend, Black Enterprises, and Ebony to name a few.

After the 2003 release of Sometimes My Mommy Gets Angry, a children's book about a little girl coping with a mentally ill mother, and a 2005 novel, 72 Hour Hold, about a mother struggling to help her 18-year-old daughter who suffers from a bipolar disorder, Campbell advocated for eliminating the stigma of mental illness. Many of Campbell's works are rooted in her personal trials and tribulations. She worked hard to promote awareness for mental illnesses, in particular, Bipolar Disorder. She saw it as her social responsibility to help those less fortunate then herself. Many of her websites and homepages contain links and contact information about the illness and related resources to assist others.

On November 27, 2006, at age fifty-six, Elizabeth Bebe Moore Campbell died of neurological brain complications, as a result of a battle with brain cancer, in Los Angeles, California. She is survived by her two ex-husbands, her children and mother. Bebe Moore Campbell's legacy will always be one of great pride and strength. She was not afraid to write what others dared not to speak. Bebe Moore Campbell will be remembered as an important African-American novelist of this century.