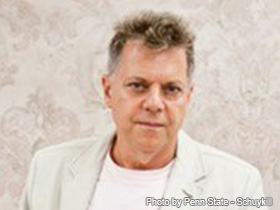 Penn State professor, Charles Cantalupo is a poet, memoirist, and author of theoretical books, such as A Literary Leviathan: Thomas Hobbes' Masterpiece of Language (1991).

Charles Cantalupo was born on October 17, 1951, in Orange, New Jersey. He is a professor at Pennsylvania State University (Penn State) Schuylkill and a poet, memoirist, and author of theoretical texts. Cantalupo has spent his life teaching, writing poetry, translating books of African poetry, and editing books. At the time of this writing, Cantalupo is a Distinguished Professor of English, Comparative Literature, and African Studies at Penn State Schuylkill.

Charles Cantalupo, currently Distinguished Professor of English, Comparative Literature and African Studies at Pennsylvania State University (Penn State) Schuylkill and a poet, author, and memoirist, was born on October 17, 1951, in Orange, New Jersey. He is the child of Charles Roger Cantalupo, an attorney, and Olga (Skula) Cantalupo, a homemaker. Cantalupo attended the University of Kent in Canterbury from 1971 to 1972; he then attended Washington University in 1973 where he earned his BA; and he, finally, attended Rutgers University in 1978 where he earned his PhD in 1980. The Contemporary Authors Online quotes Cantalupo as stating, "As a scholar I am interested in major writers such as Rudyard Kipling and Thomas Hobbes because [...] they are helpful in moving one's study beyond twentieth-century modernism and postmodernism." Between obtaining his BA and PhD, Cantalupo was married to Catherine Musello on August 21, 1976; she died on August 19, 1983. Cantalupo has since remarried Dr. Barbara Cantalupo, a professor of English at Penn State's Lehigh Valley campus.

While he was earning his degree at Rutgers University, Cantalupo began his career as a teacher's assistant. As he was completing his PhD, Cantalupo became an English professor. Soon, he moved from Rutgers University to Penn State Schuylkill where, at the time of this writing, he continues to teach English, Comparative Literature, and African Studies. Cantalupo has an interest in translating African language poets, particularly from Eritrea, where he has translated Reesom Haile and, with Ghirmai Negash, Solomon Tsehaye, Solomon Drar, Ghirmai Yohannes, Saba Kidane, Zeineb Yassim, and many more. Again with Negash, he has translated the 19th century mini-epic, "Negusse, Negusse: The World Falls Apart."

His poetry collection Light the Lights (2004), is a collection of 13 poems, most of which are several pages long. However, most of the poems are broken into sub-categories/poems that make the poetry seem shorter than it truly is. His 2018 book, Non-Native Speaker: Selected and Sundry Essays, is a compilation of 25 years worth of work.

In addition to his own literary works, Cantalupo translates African works of poetry into the English language so that more people can enjoy other works of literary art. There are many authors whose work Cantalupo has translated; one of the most notable is the work of Reesom Haile. In a review by Tanure Ojaide in World Literature Today, Cantalupo's translation of Reesom Haile's We Invented the Wheel: Poems (2002) is "a brilliant translation." Ojaide writes, "Charles Cantalupo writes a detailed essay that makes one understand the context, development, content, and form of Haile's poetry. Cantalupo is very knowledgeable about African literature." Apart from his successful African translations and essays, Cantalupo also publishes his own literary reviews of many African works.

One of Cantalupo's literary works, "A Literary Leviathan: Thomas Hobbes's Masterpiece of Language," published in 1991, was reviewed by Graham Parry in The Review of English Studies. The literary work is an examination of Thomas Hobbes's language skills in his Leviathan, a popular study. One common praise of Cantalupo's work is that he is quite knowledgeable and a master of language and how it works/should work; Parry states that, "Cantalupo's method frequently throws up rewarding insights into Hobbes's skills as an artist in language, who knows well how to face his logic with a fine verbal surface." Cantalupo easily selects the best examples of Hobbes' work throughout the Leviathan. However, despite the good methods of Cantalupo, Parry considers the literary work "dense and unyielding" as a whole. He believes that the Leviathan is too large of a work to so painstakingly study "paragraph by paragraph" and by "words and phrases."

Cantalupo has received many teaching awards throughout his career at Rutgers University and Penn State. He received the Graduate School Bevier fellowship from Rutgers University, 1979; fellowships from Penn State University (1981, 1982, 1984, 1986, and 1988); the Faculty Organization Teaching Award (1985-86); the Student Government Association Faculty Student Service Award (1987-88), and the Penn State Schuylkill Faculty Organization Research Award (2008). Cantalupo has also received the American Academy of Poets Prize (1976), for "The Death of Colin Clout" and the New York Public Library's "Books of the Teen Age" award for his translation of Reesom Haile's We Invented the Wheel. In 2012, his memoir Joining Africa — From Anthills to Asmara won the Next Generation Indie Book Award.

Currently, Cantalupo is living in Bethlehem with his four children. He also teaches classes at Pennsylvania State University Schuylkill Campus in Schuylkill Haven. He has also, recently, written and directed the 2007 documentary, Against All Odds: African Languages and Literatures into the 21st Century.