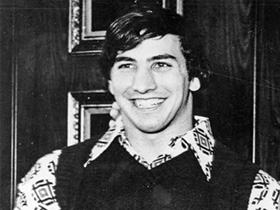 Born in Pennsylvania on August 9 1952, John Cappelletti grew up in Upper Darby, Pennsylvania, and would play football at Penn State. In 1973 he won the Heisman Trophy as the best collegiate player in the country. After college at Penn State, he was drafted into the NFL and played professional football for some years. After football, he got into business where he remains today. He remains the only man from Penn State to win the Heisman Trophy.

John Cappelletti was born August 9, 1952, in Upper Darby, Pennsylvania. He attended and played football for Monsignor Bonner High School. In 1969, he was selected first team All-Catholic and All-Delaware County. Cappelletti went on to play football in college for The Pennsylvania State University, under coach Joe Paterno.

Cappelletti's Heisman Trophy acceptance speech was said to be one of the greatest and most memorable speech's given in college sports history. He dedicated his speech to his little brother Joey who was dying of leukemia. With tears running down his face John dedicated the award to his brother who Cappelletti said had courage around the clock rather than just on the football field. A television movie of this relationship between brothers was made in 1977, Something for Joey.

He was also selected as one of three All-Americans from the Penn State line-up that year and received the Maxwell Award, an award for the college player of the year, presented in honor of legendary college player, official and sports columnist Robert W. Maxwell. Coach Joe Paterno of the Penn State football team was quoted saying "Cappy [John Cappelletti] is the best player I have ever been around. He is strong, fast, durable, and a great leader. You know he is going to come through for you when you need him."

After college, in 1974 Cappelletti was drafted to play professional football for the Los Angeles Rams, where he remained for five years. Then went on to play for the San Diego Chargers for four years, finally being forced to retire from the NFL due to an ongoing battle with a groin injury, having his last play in the 1983 football season. In 1993, Cappelletti was inducted into the College Football Hall of Fame. Then, in 2006, Cappelletti was inducted into the Regions Bank Orange Bowl Hall of Honor, an award given to men who typify the Orange Bowl's history. Today, Cappelletti resides in California with his wife and four sons and works in marketing and sales in the field of Biotech and Pharmaceutical industries.