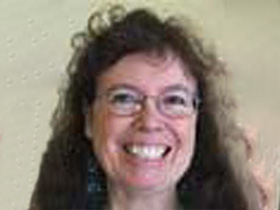 Nancy White Carlstrom, born August 4, 1948, in Washington, Pennsylvania, wanted to become a children's book author at an early age. As a primary school teacher, aid worker, and bookstore proprietor, Carlstrom authored more than 50 books for children, her most wellknown work being the Jesse Bear series inspired by Carlstrom's infant son.

The daughter of steel mill worker William J. and Eva (Lawrence) White, Nancy White Carlstrom was born in Washington, Pennsylvania, on August 4, 1948. She practiced writing poetry, enjoyed reading books like Little Women, and wanted to become a children's book author at an early age. Carlstrom worked in the children's department of her local library in Washington during her high school years. She graduated from Wheaton College in Wheaton, Illinois, majoring in Elementary Education and earning her BA in 1970, also studying at Harvard Extension School and Radcliffe from 1974 to 1976. In September of 1974, she married David R. Carlstrom, later a pilot and a marketing director at Fairbanks International Airport. They had two children—Jesse and Joshua.

Carlstrom taught first and second grade at A. Leo Weil Elementary School in Pittsburgh (1970-1972) and Plum Cove Elementary School in Gloucester, Massachusetts (1972-1974). While teaching primary school, she worked with children in West Africa and the West Indies during the summertime, and even moved with husband and taught school for children with Down's syndrome in Merida, Yucatan in Mexico. As owner and manager of The Secret Garden Children's Bookshop in Seattle (1977-83), Carlstrom promoted children's literature through various fairs, presentations, and her store's newsletter. She developed the idea for what would become her second book, Wild Wild Sunflower Child Anna (1987), during this time and received over 100 rejection letters before publishing her first book Jesse Bear, What Will You Wear? in 1986. Her family moved to Alaska in 1987 to a log house at Chena Ridge outside Fairbanks, giving her whole new subjects of northern wildlife and wilderness to write about for the next 18 years she lived there.

The title "Jesse Bear" emerged from a song Carlstrom used to sing to her oldest infant son Jesse while dressing him. Bruce Degen (of the Magic School Bus series) illustrates this series about the various preschool activities of a bear cub. Like Jesse Bear, most of the ideas for Carlstrom's more than 50 books for children come from her own family life. Her most popular book of the Jesse Bear series, and of her career, Jesse Bear, What Will You Wear?, has sold over a million copies, as it follows the story about what a bear cub wears throughout the day after experiencing many troubles that force him to change clothes. Kirkus Reviews describes it as "a bubbling verse that combines rhythm and rhyme to create a lovely sound...One is tempted to sing Carlstrom's words aloud. She has a rich imagination..."

Margaret Moorman of The New York Times Book Reviews criticizes Where is Christmas, Jesse Bear? (2000) by describing that "it has the feel of something cranked out for the holidays, as if an editor or an agent suddenly realized that this particular commercial stone lay unturned." It "is sweet...But there is not much to it" and author "often loses her metric footing." Shelley Townsend-Hudson of Booklist, conversely, writes that "Carlstrom captures it all perfectly, always maintaining a child-centered focus." In another title in the series, Climb the Family Tree, Jesse Bear! (2004), Carolyn Phelan of Booklist comments that "Rhyming couplets keep the story moving along quickly from one happy scene to the next, while the ink drawings, brightened with colorful washes, reflect the genial tone of the words." The School Library Journal's Wendy Woodfill follows up: "Carlstrom's breezy, bouncy rhymes describe all of the tastes, smells, and sights of an active and loving family get-together. The watercolor-and-ink illustrations are bright, cheery, and uncluttered. Fans of Jesse Bear will be more than satisfied with this child's-eye view of an event that many youngsters experience."

Be Astengo of School Library Journal critiques What Does the Sky Say? (2001) as a "poetically written picture book...While the religious foundation of the book is ambiguous, Psalm 19:1-4a, listed on the last page of the book, helps readers to see the author's inspiration: '...the skies proclaim the work of God's hands...'" Fern Kory of the Bulletin of the Center for Children's Books observes that "The philosophy is admirable, but the poetic text is sometimes hindered by conceptually difficult or ambiguous language...and unclear...The tie to the declaration in Psalm...is a bit tenuous as an afterthought, but Sunday-school teachers and others may well be attracted to the model attitudes of the main character, the book's statement of faith, and its overt message that under the sky's 'wide roof...surely there is room for everyone to live in peace.'" Denise Wilms of Booklist adds the following: "Sparkling snow, a rainbow, a magnificent sunset, or a great harvest moon, these things 'speak' to a little girl who experiences all of them and more as she moves through the pages...A poetic appreciation of the wonders of the sky."

Nancy White Carlstrom founded a chapter of the Society of Children's Book Writers and Illustrators in the late 1980s. Her numerous awards include: the Editor's Choice from Booklist in 1986; the Children's Choice award from the International Reading Association/Children's Book Council (IRA/CBC) in 1987; the American Booksellers Pick of the List and Notable Book from the National Council of Teachers of English (NCTE) in 1987; the Best Book of 1990 from Parents' Magazine for Where Does the Night Hide?; a second Children's Choice from the IRA/CBC and the Parents' Choice award from Booklist in 1991; a Notable Book award from NCTE in 1991; a citation on the Best Books of the Year list from Publishers Weekly in 1992; a Gold Medal from the Society of Illustrators and Best Books from the Bulletin of Children's Books; a Parents' Choice Paperback in 1994; and the National Outdoor Book Award in 2001.

Explaining her writing process to the Fairbanks Daily News-Miner, Carlstrom says that "It's as if I have a good pot of stew simmering on the back burner of the stove. Sometimes I stir. Sometimes I taste. But most of all I toss in new ingredients and make sure the stove is turned on. When my 'story stew' is ready to serve, I am ready to write."