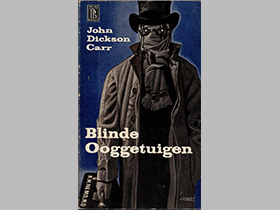 On November 30, 1906, John Dickson Carr was born in Uniontown, Pennsylvania. Over the course of his career, which spanned more than forty years, Carr established himself as one of the most innovative mystery writers of his time. During his prime, Carr was regarded as one of the "grand masters" of detective fiction. Best known for his "locked-room murder" mysteries, Carr published 86 novels, most of which had detective plots. In addition to his literary contributions as a novelist, Carr was also recognized for his talents as a radio scriptwriter and short-story author. After spending much of his adult life abroad, mainly in England, Carr returned to the United States, where he remained until his death on February 27, 1977.

John Dickson Carr was born on November 30, 1906, in Uniontown, Pennsylvania. He was the son of Julia Carr and Wooda Nicholas Carr, a Pennsylvania politician and congressman. Before he reached his teens, Carr expressed his interests in writing by authoring sports articles and covering murder trials for the local newspaper. By the time he was 15, he had his own column. Between 1921 and 1925, Carr attended the distinguished Hill School, a boarding school in Pottstown, Pennsylvania, where he wrote for the school's literary magazine. After graduating from Hill, Carr pursued higher education at Haverford College, also in Pennsylvania. He continued his literary work there as editor of The Haverfordian, writing stories and poems. Carr left the United States in 1928 for Paris, where he began to further explore writing. Legend has it that while in Paris, Carr wrote and destroyed his first novel, a historical adventure, because of his dissatisfaction with his work. There, he also published his first surviving work, It Walks by Night, in 1930. At the age of 25, he married Clarice Cleaves. A year later, the two settled in England, where Carr would spend much of his career. Together, Carr and his wife had three daughters: Julia, Bonita, and Mary.

It Walks by Night was the first glimpse into Carr's writing and his unique style of mystery plots. Like many of his novels that followed, ItWalks by Night was a so-called locked-room murder, the mystery sub-genre for which Carr is most renowned. Typically in locked-room mysteries, the reader is presented with the facts of the case and is expected to come up with their own solution before the explanation is revealed. The term "locked-room" stems from the fact that the crime or murder in the mystery takes place in a room in which the only entry, usually a locked door, is sealed and locked from the inside. The catch is that there is no indication of forced-entry, leaving the reader to determine how the perpetrator succeeded in carrying out a crime without leaving a trace.

During his time in England, Carr also scripted radio plays for Cabin B-13 and Appointment with Fear, which were popular BBC and CBS mystery series. In England, he also completed his 1935 novel, The Hollow Man, which was recognized by H.R.F. Keating, one of Britain's most recognized mystery writers, as one of the 100 best crime and mystery novels ever written.

Though Carr spent the greater part of his career working in England, he continued to publish some of his novels in the United States through Harper & Brothers publishing company. Because Harper only allowed Carr to print two books a year with their company, Carr had to seek alternatives to publish his other writing. After negotiating, Harper finally agreed to publish further work for Carr because they felt that his publishing with another company would essentially create competition with himself. There was, however, one condition—Carr had to publish his book under a pseudonym. When Carr later signed additional contracts for publishing rights in Britain with the William Morrow Company, he also assumed pseudonyms so that audiences would not recognize that his works were the creation of the same author.

In 1941, when the United States entered World War II, Carr was still residing in Britain and fully intended to remain there; he was successfully writing allied propaganda plays which were broadcasted on BBC. Carr was so effective in swaying listeners to side with the Allied Forces that Britain requested that the U.S. embassy allow Carr to stay in Britain to continue his work. Their appeal was granted for some time, but in 1942, Carr was forced by the United States government to return to the U.S. and enlist in the draft. Ultimately never called on for duty, Carr relocated to a New York suburb at the conclusion of the war and, more than ever, viewed writing as his highest priority. It has been documented that Carr would write for up to 18 hours nonstop. This dedication was due, in part, to his goal to complete four novels per year. During this period, another of Carr's most notable projects was The Life of Sir Arthur Conan Doyle (1949), a work the family of Conan Doyle, author of the Sherlock Holmes mysteries, commissioned him to write. This work earned him an Edgar Allan Poe Award from the Mystery Writers of America.

In the early 1950s, Carr resumed residency in England where he delved further into his mystery writing and renewed his interest in the sub-genre of historical mystery. He was particularly taken with seventeenth-century British history and incorporated it into many of his books. To give his writing a realistic tone, Carr did extensive research to ensure that he accurately represented the era. Works of Carr's belonging to this sub-genre include The Bride of Newgate (1950)and The Devil in Velvet (1951), his bestselling book.

During his tenure as a writer, Carr was recognized for his contributions to the mystery genre with several honors, one of which included being named a Grand Master by Mystery Writers of America in 1962. He was twice awarded the Ellery Queen Prize for short stories and was a member of the Baker Street Irregulars. Carr was also one of the few Americans to be granted membership in Britain's Detection Club.

For a large portion of his life, Carr was a heavy drinker and smoker, which likely contributed to his lung cancer that was first diagnosed in the early 1970s. Carr suffered severely from the cancer, but it went into remission twice. During the summer of 1976, the cancer returned and this time continued to metastasize, forcing Carr to be admitted to a nursing home for proper care. Carr would remain in the nursing home in Greenville, South Carolina, with his wife visiting him daily, until his death in early 1977.

Works Written Under His Proper Name

Novels Under the Pseudonym "Carr Dickson"

Novels Under the Pseudonym "Carter Dickson"