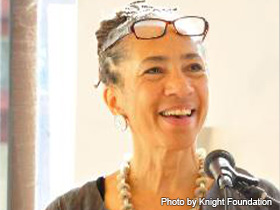 Novelist and University of Pennsylvania professor Lorene Cary grew up in Yeadon.

Born on November 29, 1956, in Philadelphia, Pennsylvania, Lorene Cary is a highly respected African-American author and social activist. After attending the previously all-white St. Paul's School as an adolescent, Cary experienced a conflict of emotions that eventually inspired her bestselling book, Black Ice (1991). She is the founder of the Art Sanctuary (1998), a Philadelphia venue based in the Church of the Advocate that uses the power of black art to unite groups of people and draw inspiration from the inner city. At the time of this writing, Cary serves as a Senior Lecturer at her alma mater, the University of Pennsylvania, and visits several universities and colleges to speak on her experiences as an African-American.

Lorene Cary, a highly respected African-American author and social activist, was born in Philadelphia on November 29, 1956, to John and Carole (Hamilton) Cary. After living in a city apartment in West Philadelphia for brief period, the Cary family moved to Yeadon, a predominately black suburb of Philadelphia. It was here, at age fourteen, that a neighbor first told Cary of the very prestigious St. Paul's School located in Concord, New Hampshire. St. Paul's was a private, college-preparatory boarding school for grades nine through twelve that was affiliated with the Episcopal Church. The school had recently gone coed and several alumni were passing down the word that the school was interested in finding black girls to attend it. After attending an informational session and visiting the campus, the young Cary decided that "no matter what, [she] wanted to go." In March of 1972, Cary was accepted to go to St. Paul's School and invited to be part of the Class of 1974.

While at St. Paul's School, Cary experienced a conflict of emotions that eventually inspired her bestselling book, Black Ice (1991). Being one of the first black students to study at St. Paul's, Cary was forced to find her identity. She wanted to hold on to her African-American culture as best she could, while at the same time becoming an educated individual in a system constructed by whites. These conflicting interests placed many questions into her mind and at points forced her to question her connection with St. Paul's later in life.

After graduating from St. Paul's School in 1974, Cary attended the University of Pennsylvania. She excelled there in academics and was awarded a Thouron Fellowship for British-US Student Exchange. The Thouron Fellowship is a 1 to 2 year appointment for graduate students that aims to promote "understanding and friendship between the people of the United Kingdom and those of the United States of America." The fellowship covers a student's tuition fees while giving students the ability to travel throughout a different country by giving a living allowance and a travel stipend. After being informed that she was chosen for the fellowship, Cary decided to enroll in Sussex University to study Victorian literature and religion. After her time abroad, she returned home to complete her BA and MA in English and graduate from the University of Pennsylvania in 1978.

Cary started her writing career as an apprentice for Time in 1980 and then as an Associate Editor at TV Guide. Soon after starting her career, she married Rev. Robert C. Smith on August 27, 1983. Cary also freelanced for American Visions, Essence, Mirabella, and The Philadelphia Inquirer Sunday Magazine, and was a Contributing Editor for Newsweek in 1993.

Cary would soon achieve national recognition as a writer when her book, Black Ice, was published in 1991. According to the Los Angeles Times Book Review, Black Ice is about "being black in a quintessentially white world, female in a male environment, scrape-by middle class in a rich world, and nontraditional newcomer in the traditional." In the book, Cary detailed the range of emotions she felt while attending St. Paul's boarding school as a child. Because she was one of the first African-American girls to attend the prestigious school, at points Cary felt as though she was abandoning her black heritage. The term "Black Ice" is Cary's vision of a perfect world for blacks if they do not simply adopt white culture as their own out of convenience. She wants her children to "skate" on the solidity of their own culture instead of falling through the thinner ice of a substitute culture not strong enough to support them as aspiring black youths. After Black Ice hit bookstores across the nation, Cary acknowledged that the book was healthy for her because it "allowed her to make peace with the young girl she had been." The book was a 1992 American Library Association Notable Book and propelled Cary to the forefront of social activism.

After writing The Price of a Child (1995), a novel about the Underground Railroad, Cary again received much praise throughout the literature world. The New York Times called Cary a "powerful storyteller, frankly sensual, mortally funny, and gifted with an ear for the pounce of real speech." With two highly-regarded books under her belt, Cary decided to expand her influence by founding the Art Sanctuary in Philadelphia. The sanctuary focuses on regional and national talent among African-Americans in literary, visual, and performing arts. It is based in The Church of the Advocate, a National Historic Landmark Building in North Philadelphia. It was of great importance during the Civil Rights Movement and was the site of several social services and outreach programs during this time. According to Cary, "We're used to creating art. But too often we don't see our artist until the art becomes of economic value, in stores or on television. We want to be the Carnegie Hall in the hood.'"

In 2015, Cary founded SafeKidsStories.com with University of Pennsylvania students. According to its website, SafeKidsStories feels an urgency to seek out ways to do better and to celebrate when we find them. Using a wide range of contributors, from college writers to K-12 students to professional journalists and artists, SafeKidsStories creates a a real and virtual community to write our way toward more cultural protections for children, starting here in urban Philadelphia and radiating out.

At the time of this writing, Lorene Cary resides in her hometown of Philadelphia, teaching classes at the University of Pennsylvania as a Senior Lecturer in Creative Writing. In 1998, She has been awarded the Provost's Award for Distinguished Teaching (1998) and The Philadelphia Award (2003), a Philadelphia Historical Society Founder's Medal for History in Culture. She has also received writing fellowships from Pew Fellowship in the Arts and the Leeway Foundation, residencies at Yaddo and the Civitella Ranieri Foundation in Italy, and Doctorates in Humane Letters from Colby College, Keene State College, and Chestnut Hill College. Cary has served on the Panel for The American Heritage Dictionary and the Union Benevolent Association board, and is a member of PEN and the Author's Guild. Cary has two children, Laura and Zoe, and one stepchild, Geoffrey.