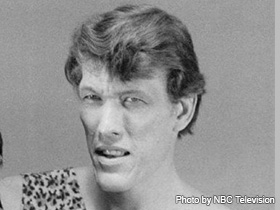 Actor Ted Cassidy is best known for his portrayal of the butler Lurch on The Addams Family.

Ted Cassidy was born in Pittsburgh on July 31, 1932. He grew up in West Virginia and was known for his tall height starting at young age. He later attended college, married Margaret Helen, had two children, and worked as a radio announcer. He then began his work as an actor in several films and was the voice of many characters. His later role as Lurch on The Addams Family became his most widely known and he is quoted for the line "you rang?" Cassidy died on January 16, 1979, in Los Angeles from open-heart surgery complications.

Theodore Crawford "Ted" Cassidy was born on July 31, 1932, in Pittsburgh, Pennsylvania, but was raised in Philippi, West Virginia. Cassidy entered third grade at age six and entered high school at age 11; he was 6 feet and 1 inch tall. He joined the football and basketball teams, and stood out on his team due to his great height. Cassidy attended West Virginian Wesleyan College and Stetson University in DeLand, Florida to play college basketball, where he was a member of the Alpha Sigma Phi fraternity. Upon graduation with a degree in speech and drama, he married Margaret Helen in 1956. They moved to Dallas, Texas. He was offered a job as a singer with the Paul Whiteman Orchestra, but declined the offer to become a radio announcer for WFAA. His job would later include coverage and interviews of witnesses to President John F. Kennedy's assassination. In 1957, Margaret gave birth to their son, Sean, and in 1960 daughter Cameron was born.

Cassidy began acting in 1960 with roles such as the voice of the Marian in The Angry Red Planet, as Harvey Logan in the movie Butch Cassidy and the Sundance Kid, as Injun Joe in The New Adventures of Huck Finn, as an android in a Star Trek Episode, and as the narrator for The Incredible Hulk television series. His most notable role was as Lurch, the 6'9 inch butler with the deep voice in The Addams Family in 1964. The role of Lurch was intended to be silent until Cassidy added a speaking line in his audition and impressed the director. His character consisted of working for millionaire Gomez Addams and family, and responding to their calls for his presence with the famed line, "You rang?" He was also known for answering the doorbell that rang with the sound of a foghorn and scaring guests, along with playing the harpsichord. Additionally, he played the role of Thing on The Addams Family, a hand that answered the phone and assisted with the mail. In 1972, Cassidy wrote the movie Charcoal Black with Chris Robinson, and in 1973 wrote the screenplay The Harrad Experiment with Michael Werner. He later divorced Margaret Helen in 1976.

He died on January 16, 1979, in Los Angeles due to complications of open-heart surgery. His remains are buried in the backyard of his home in Woodland Hills, California.

Photo Credit: NBC Television. "Ted Cassidy as Tarzan and Cheeta from the television game show Storybook Squares. Cassidy was best known for his role as Lurch the butler on The Addams Family. The program was a children's version of the adult game show Hollywood Squares.." c. 1969. Photograph. Licensed under Public Domain. Cropped to 4x3. Source: Wikimedia.