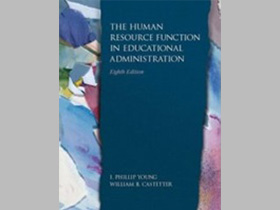 Castetter was the author of several books dealing with educational administration, like The Human Resource Function in Educational Administration.

William B. Castetter was born on August 31, 1914, in Shamokin, Pennsylvania, to parents Edward Franklin and Stella (Zimmerman) Castetter. He earned his Bachelor of Science degree from the University of New Mexico in 1936, and his Master's degree also from UNM in 1937. After graduating, he became a high school principal in Melrose, New Mexico, a job he held until 1940, when he entered the U.S. Army, Infantry division. Castetter served in the Army until 1945, leaving with the rank of captain.

Castetter found his home at the University of Pennsylvania, progressing from assistant professor to professor of education. Retired, he currently maintains the title of professor emeritus. During his career in education, Castetter not only taught, but published many scholarly articles and books pertaining to educational administration. His first solo book, Public School Debt Administration, was published in 1958, and he wrote or contributed to a total of 14 books between 1952 and 1980.

Castetter's book The Personnel Function in Educational Administration, first published in 1970, currently in its eighth edition and renamed The Human Resource Function in Educational Administration, is still a widely used textbook in college education today. The explanation appearing on the hardcover edition of the book says: "With its comprehensive approach, this classic book is designed to cover each of the eleven processes related to the human resource function. The book focuses on the management of the school systems' human resources and discusses whose qualities and performance determine system outcomes in educational administration." To illustrate his points, Castetter discusses research, reform movements, political developments with educational significance, and new approaches to long-standing problems with the human resource function.

Castetter's legacy lives in the William B. Castetter Award, given to an alumnus or alumna of the University of Pennsylvania's Graduate School of Education. It recognizes significant service, extraordinary and voluntary, of the recipient to the school.