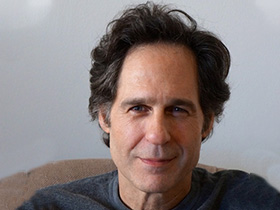 A writer and illustrator of children's books, Peter Catalanotto lives in Doylestown.

Children’s author Peter Catalanotto, born March 21, 1959, loved art from a very young age. He started illustrating for newspapers, and he wrote and illustrated his first book Dylan's Day Out in 1989. He has illustrated for magazines, book jackets, and other authors. Catalanotto spent time in Bucks County, Pennsylvania. Read more here.

Peter Catalanotto was born on March 21, 1959, in Atlanta, Georgia, to father Anthony, a painter, and mother Ella Virginia, a homemaker. Catalanotto grew up in East Northport, Long Island, New York. His family was always fond of art, and he was surprised when he started school and discovered that not everyone could draw like his family. As a child he enjoyed drawing, especially comic book characters, like Spider-Man.

Catalanotto said to Contemporary Authors Online that he was frustrated by elementary and high school art classes because they did not challenge him. He even said that he failed tenth grade art "out of sheer boredom." He did not feel challenged artistically until he attended the Pratt Institute in New York City. The Pratt Institute was the only college, out of four he applied to, to accept him. He studied illustration, drawing, and painting there. Catalanotto said he developed the watercolor technique that he still uses today there. "I think it's important for an artist to find a medium that suits his or her personality," Catalanotto said. "Watercolor allows me to stop and start without a lot of preparation. I can be loose or tight with my style with washes and rendering." Catalanotto graduated with a bachelor's degree in fine arts from Pratt in 1981. After graduation he started free-lance illustrating. He illustrated for newspapers and then started getting assignments from magazines, such as Reader's Digest, Family Circle, Woman's Day and Redbook.

In 1984, Catalanotto began painting covers of young adult book jackets, and he has created more than 150 of them. In 1987, he was offered a picture-book manuscript for All I See by Cynthia Rylant. He finds that the best way to illustrate a story is to spend time where the scene of the book takes place. For Rylant's book All I See, he spent time on a lake, sketching and photographing. After many discussions with friend and editor Richard Jackson while working on All I See, Catalanotto became inspired to write his own books.

He wrote and illustrated his first book, Dylan's Day Out, in 1989. He researched his book idea, which was writing about his dog, by following his dog around the house. The book is about a Dalmatian who sneaks out of his home to play a soccer game with skunks and penguins. Catalanotto tells children during his school presentations that they should write about things that have happened to them as well as things that they would like to have happen to them. He follows his own advice with his stories. Mr. Mumble (1990) was inspired by his own childhood as a shy boy, and Christmas Always...(1991) is a story about what he wished happened to him instead of his reality (he was sent away to his bedroom early on Christmas Eve before his family's holiday party was over).

The Painter (1995) was also inspired by Catalanotto's life. He did not allow his daughter Chelsea in his studio during her childhood. "I work with scissors, razor blades, sharp pencils, and spray cans, and I was terrified she would get hurt, so I never let her up there," Catalanotto told the Something About the Author Autobiography Series. After letting Chelsea into his studio at the age of four, Catalanotto was inspired to write The Painter, which is a story told through the eyes of a fictional girl who is not allowed in her father's art studio and loves to spend every moment she can with him. According to reviewer Cassie Whetstone, "Not only are her feelings told through words, they are expressed through Catalanotto's creative use of body language." Whetstone goes on to explain the creative use of body language is shown through the imagery of the girl hugging her father while making pancakes, along with other similar images. "This is a book created for children that will stir emotions and evoke memories in adults," wrote Whetstone.

In between his own projects, Catalanotto continued illustrating for other authors. Horn Book critic Nancy Vasilakis said that Catalanotto's paintings for Susan Patron's Dark Cloud Strong Breeze, "really capture attention" especially "the winsome informality of subjects caught off-guard" and the artist's use of "an unusual three-dimensional effect."

Today, Catalanotto lives in Bucks County, Pennsylvania. He continues to illustrate and write his own books, including Question Boy Meets Little Miss Know-It-All, which is due out in 2012. Catalanotto articulates his thoughts on his work: "I think writing and illustrating picture books suits my personality much more than simply illustrating book jackets and magazine articles. I can be quiet and subtle with my work while trying to catch someone's eye. A book jacket yells at you to take it off the shelf. An entire picture book slowly unfolds before you, almost inviting you to stay."