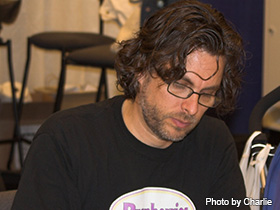 Novelist and short story writer Michael Chabon earned his BA at Pitt and wrote a novel set in the city: The Mysteries of Pittsburgh (1988).

Born in Washington, DC, Michael Chabon grew up reading comic books and knew he wanted to be a writer. He graduated from the University of Pittsburgh with a BA in English in 1984 and went on to earn an MFA in Creative Writing at the University of California, Irvine in 1987. He has contributed to Vogue, New Yorker, New York Times, and Harper's. Michael Chabon has become an accomplished novelist, short-story writer, children's fantasy novelist, and screenwriter.

Michael Chabon was born in Washington, DC, on May 24, 1963. His father, Robert, is a physician, lawyer, and hospital administrator and his mother, Sharon, is a retired lawyer.

In 1987, Chabon won a short-story contest with Mademoiselle, and in that same year, he wrote his master's thesis, The Mysteries of Pittsburgh (1988). His adviser was so astonished that he sent the manuscript to a literary agent at the Virginia Barber Agency in New York City. The agent sold the book to William Morrow Publishers for $155,000 at a private auction—one of the highest figures ever paid for a first novel by a young unknown fiction author.

Michael Chabon gained instant fame and success with Mysteries of Pittsburgh. He became known in the highly competitive publishing world of New York. This coming-of-age book became a commercial bestseller and was praised by literary and academic critics. Mysteries of Pittsburgh was made into a film adaption in 2006 and was released in 2008.

The appealing aspect of The Mysteries of Pittsburgh is that it is clearly a coming-of-age novel—a real bildungsroman. In the beginning, it was compared to J.D. Salinger's The Catcher in the Rye (1951), as well as F. Scott Fitzgerald'sThis Side of Paradise (1920).

Chabon had been writing and publishing short stories between 1987 and 1990, mostly in The New Yorker, but also in Gentleman's Quarterly and Mademoiselle. He has become better known as a novelist, but there is no arguing he is one of the more accomplished American short-story writers of the 1980s and 1990s.

After the phenomenal success of The Mysteries of Pittsburgh and A Model World and Other Stories (1988), Chabon received a substantial advance to work on his next novel, tentatively titled "Fountain City." The "Fountain City" project seemed to be going nowhere after two years and his domestic life was unsettled: he was divorced in 1991, and in 1993 he met and married Ayelet Waldman, a lawyer. They have three children, Sophie, Ezekiel, and Ida-Rose. After five years he began to see his book had no direction and from this experience came his second novel, Wonder Boys (1995).

In Wonder Boys, Chabon wrote about a novelist who can't get his next novel written. It was made into a critically acclaimed movie in February 2000; it featured Michael Douglas and Tobey Maguire. Wonder Boys was not originally intended as a comedy, but humor is constant throughout the novel and film.

Chabon's third novel, The Adventures of Kavalier & Clay (2000), won him a Pulitzer Prize in 2001. It is 636 pages and almost as long as all of Chabon'sprevious books put together. Ken Kalfus in The New York Times Book Review (24 September 2000) listed the most outstanding qualities of the volume: "The depth of Chabon's thought, his sharp language, his inventiveness and his ambition make this a novel of towering accomplishment."

All three of Chabon's novels are viewed as spiritual, psychological, and mythical journeys that seek to create meaning in an empty world.

Chabon's next book was a critically acclaimed children's fantasy novel, Summerland (2002) that combines elements of Native American and Norse myth and folklore. Here, he creates his own magical world. Summerland combines the author's love of fantasy and baseball in a highly imaginative way.

At the time of this writing, he and his family, including his wife, the writer Ayelet Waldman, live in California.