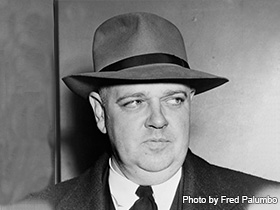 A key figure in the Alger Hiss trial, Whittaker Chambers was born in Philadelphia.

Born in 1901, Whittaker Chambers was an American journalist, writer, and editor for magazine companies. He also wrote his autobiography, Witness, and translated the children's novel Bambi from German to English. Chambers was involved with the Communist Party for about 13 years, leading him to get involved in scandals and spy work for the Soviet Union. This part of his life led him to many hardships and criticism from Alger Hiss and Richard Nixon.

Chambers was born on April 1, 1901, in Philadelphia to a middle class family with the name Jay Vivian, and spent much of his youth in Brooklyn. He was described in childhood as a loner whose parents frequently separated. Whittaker Chambers' father was an illustrator and part of the New York-based Decorative Designers group, and his grandfather James Chambers was an editor for the now defunct Philadelphia Ledger. After graduating from high school in 1919, he worked for two years in a bank before enrolling in Columbia University. At Columbia, his instructors recalled him as a talented writer who rarely went to class. He was expelled in 1922 for one of two assumed reasons, either for a blasphemous play he wrote or for simply not going to class.

Chambers joined the Communist Party in 1925 where he spent 13 years as a member. He wrote and edited for the communist periodicals, including the Daily Worker and the New Masses. He was sent to Moscow for intelligence training and when he returned to the United States, he was introduced to Harold Ware, who was head of the Ware Group, a Communist underground cell in Washington. Within that group he met Alger Hiss, Henry Collins, and Lee Pressman. He also served under various aliases as a courier in a Soviet spy ring infiltrating the US government. Chambers, in other words, is one of the most controversial Americans of the last half-century. In the late 1930s, Chambers left the Communist Party and was hired by Time magazine. Starting at the back of the magazine, reviewing books and film with James Agee, he eventually rose to the position of senior editor. While at Time, Chambers became known as a staunch anti-Communist, sometimes enraging his writers with the changes he made to their stories. In 1927, Chambers translated Bambi, a children's novel written by Felix Salten, because wages at the Daily Worker were "intermittent and so small," as he stated in the book Witness.

His stories caught a lot of attention that led Chambers to testify before the House Un-American Activities Committee and to present a list of what he said were members of an underground Communist network working within the United States government in the 1930s and 1940s. One of the names on that list was that of a State Department official who had participated in the creation of the United Nations, Alger Hiss. On August 17, 1948, Hiss confronted Chambers. The official White House response was to dismiss the case as a "red herring." Internally, White House staffers set about discrediting Chambers. Chambers was criticized and humiliated publicly by Hiss to destroy his credibility. Congressman Richard Nixon was so skeptical of his background, he asked FBI Director Hoover to do a thorough background check. Nixon feared Chambers was queer and had been confined to a mental hospital. The FBI found gaps in Chambers' life story for which Chambers could not account. On May 31, 1949, amidst unprecedented hype, Alger Hiss's perjury trial began. After that trial ended in a hung jury, a second was held that ended with a one count conviction of Hiss on January 21, 1950. By then, Chambers had made a total of 14 appearances. Because of his testimony, he resigned from his position at Time and, at one point during the trial, Chambers attempted suicide.

A little time later, Chambers went to work on a farm where he wrote his autobiography, Witness (1952), which some consider a classic of confessional literature, and others the work of a pathological liar. He also worked for Fortune and Life Magazine. At the age of 38, he suffered from angina and finally died after his seventh major heart attack on July 9, 1961, at the age of 60. A final book, Cold Friday (1964), was published with the help of Duncan Norton-Tyler, which mentioned the fall of Communism in the Soviet Union and Eastern Europe. Chambers was posthumously awarded the Presidential Medal of Freedom in 1984 by President Reagan for his contribution to "the century's epic struggle between freedom and totalitarianism." Chambers was a man who lived a life of hardship and tough times. It seemed like his life was always hard on him starting from being expelled from college and then being involved in scandals with the US and Russia. He worked mostly as a writer and an editor because he was good at what he did. Even with all the hard times, Whittaker managed to make it through and finally write his autobiography explaining his confusing yet exciting life.

Collection of Essays and Short Writing