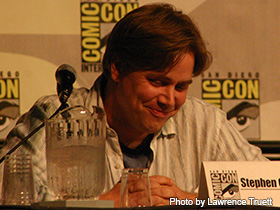 Pittsburgh native Stephen Chbosky is best known for the young adult novel The Perks of Being a Wallflower.

Stephen Chbosky was born on January 25, 1970, and was raised in Pittsburgh, Pennsylvania. In 1992, he graduated from the University of Southern California. He has written numerous screenplays and received a number of honors for his film, The Four Corners of Nowhere (1995), as well as his screenplays. Chbosky is well-known for his coming-of-age novel, The Perks of Being a Wallflower (1999) and his adaptation and directing of Wonder (2017), based on the novel by R.J. Palacio. Chbosky is an active supporter of gay rights. At the time of this writing, he lives and works in Los Angeles, California.

Stephen Chbosky was born in Pittsburgh, Pennsylvania, on January 25, 1972, to Fred, a former CFO consultant, and Lea, a tax preparer. He grew up in Upper St. Clair, graduating from the local high school. He received his Bachelor of the Fine Arts degree from the University of Southern California's film writing program in 1992.

Chbosky is a screenwriter, television writer, and stage writer. His first film, The Four Corners of Nowhere, which he wrote the screenplay for and also directed, premiered at the 1995 Sundance Film Festival, the largest independent cinema festival in the United States. The film won Narrative Feature honors at the Chicago Underground Film Festival. According to an All Movie Guide plot description written by Sandra Brennan, The Four Corners of Nowhere is a "humorous film [that] attempts to explain the nihilistic attitudes and terminal ennui of the X-generation." The film follows the lives, relationships, and opinions of a group of twentysomethings living in Ann Arbor, Michigan. In addition to his honors for The Four Corners of Nowhere, Chbosky has been recognized for other films to which he contributed.

He is the recipient of the Abraham Polonsky Screenwriting Award for his screenplay Everything Divided. Chbosky wrote the screenplay for the film version of the popular stage play, Rent, and he was the co-editor and contributor to another stage play, Sexaholic (2001). His project, Fingernails and Smooth Skin, is the story of a young couple whose longtime relationship is threatened by their foibles and infidelities. Chbosky was a participant in the Sundance Institutes Filmmakers' lab. He also edited Pieces: A Collection of New Voices, a collection of fictional short-stories, and is the author of a book for a musical, Kept.

Chbosky is most well-known in the literary world for his popular, coming-of-age novel, The Perks of Being a Wallflower, published by MTV/Pocket Books in February 1999. The book, which is Chbosky's first novel, follows the life of 15-year-old Charlie who prefers to observe the world around him instead of participating; this changes when he becomes friends with Patrick, a senior suffering because of his secret relationship with the high school football star, and Patrick's step-sister, Sam, for whom Charlie has an unrequited love interest. The novel, told through Charlie's notes to an unnamed stranger, follows the lives of Charlie's group of high school friends through first relationships, parties, and performances of The Rocky Horror Picture Show.

The Perks of Being a Wallflower, which takes place in the Pittsburgh area, gives glimpses of experiences unique to the city. In an interview with Ed Blank in Pittsburgh Live Online, Chbosky says of growing up in Pittsburgh, "What I do know is that growing up in Pittsburgh, the only places a kid could go to see something different was the movie "Rocky Horror Picture Show," and the coffee shop called The Beehive - both were very important." In the novel, other unique aspects of Pittsburgh are depicted. In one scene, Charlie, Patrick, and Sam drive through the Fort Pitt tunnel after a dance. Charlie gives a beautiful description of the experience:

"After the dance, we left in Sam's pickup. Patrick was driving this time. As we were approaching the Fort Pitt Tunnel, Sam asked Patrick to pull to the side of the road. I didn't know what was going on. Sam then climbed in the back of the pickup, wearing nothing but her dance dress. She told Patrick to drive, and he got this smile on his face. I guess they had done this before.

And in that moment, I swear we were infinite."

In addition to descriptions of Pittsburgh, Charlie talks about Penn State University, where his older brother goes to school and plays football. Charlie says he hopes his brother is "having a college experience like they do in the movies." He goes on to explain, "Not the big fraternity party kind of movie. More like the movie where the guy meets a smart girl who wears a lot of sweaters and drinks cocoa." Charlie eventually finds out his brother is dating a girl named Kelly who is "hot beautiful." Charlie says they met at a restaurant called, Ye Olde College Diner, where "they supposedly have this famous dessert called 'grilled stickies.'" Due the popularity of the novel, The Perks of Being a Wallflower is a book that has stirred up quite a bit of controversy for what opponents see as graphic depictions of drug use, homosexuality, and premarital sex. In several instances, the book was even banned from high schools.

Chbosky never intended The Perks of Being a Wallflower to be a novel for adolescents; however, its focus on adolescents has caused critics to view it as such. In an interview with Marty Beckerman of wordriot.com Chbosky laments that, "people can't agree to disagree, and people can't find common ground. The people who object for moral reasons cannot see the value of the book, and the people who see the value of the book don't realize why it's upsetting to more religious people." Despite the controversy, The Perks of Being a Wallflower, Chbosky told Beckerman that he, "[he is] very optimistic about [literary freedom in America]."

In Sally Estes' February 15, 1999, review of The Perks of Being a Wallflower in Booklist she says, "First novelist Chbosky captures adolescent angst, confusion, and joy as Charlie reveals his innermost thoughts while trying to discover who he is and whom he is to become." On March 15, 2000, Booklist chose The Perks of Being a Wallflower as one of the Quick Picks for Reluctant Young Readers, and on June 1, 2001, Booklist chose the novel as one of the Top 10 Gay and Lesbian Books for Youth.

Chobsky was a creator, writer, and executive producer of the CBS television series Jericho (2006-2008), which was an action drama exploring the aftermath of nuclear attacks in a fictional Kansas town. According to Anthony Breznican of Entertainment Weekly, Chobsky also wrote the 2005 screenplay for Rent, co-wrote the 2017 live-action Beauty and the Beast, and wrote and directed a 2012 film based on The Perks of Being a Wallflower. He adapted and directed the 2017 movie Wonder, based on the bestselling book of the same title by R.J. Palacio. Chobsky's own second novel, Imaginary Friend (2019), is a horror novel centered on an eerie disappearance and reemergence of a single mother's young son.

At the time of this writing, Stephen Chbosky lives and works in Los Angeles, California, remains active in supporting gay rights, and continues to work on films.