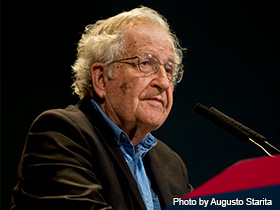 Grammarian and social activist Noam Chomsky was born in Philadelphia and attended the University of Pennsylvania.

On December 7, 1928, Avram Noam Chomsky was born in Philadelphia, Pennsylvania. He attended Oak Lane Country Day School, and later Central High School. He received both his BA and PhD from The University of Pennsylvania. In 1955, at the age of 27, Chomsky was hired as a professor at the Massachusetts Institute of Technology (MIT). His unconventional ideas regarding syntax and grammar put him in the national spotlight. In the early 1960s, he made a gradual shift from grammar research to political activism and continued to teach publish several books on linguistics. He writes and lectures to date, and his influential linguistics book Aspects of the Theory of Syntax (1965) was rereleased in 2015 to celebrate its 50 years of continued relevance.

Avram Noam Chomsky was born on December 7, 1928, in East Oak Lane, a neighborhood in Philadelphia, Pennsylvania. His father, Dr. William Chomsky, was a Hebrew grammarian, and his mother, Elsie Chomsky, was a teacher. The influence that Dr. Chomsky, a linguist, had on his son is fairly obvious. Even at a young age, his son used to read ancient and modern Hebrew texts. In his biography, Noam Chomsky, Robert Barsky remarks that while Chomsky's father fueled his academic aspirations, his mother was responsible for his political leanings: "Her political sensitivity motivated him, from a very young age, to look far beyond his immediate social context and into the realm of political action and involvement."

His official schooling began at Oak Lane Country Day School, run by Temple University. According to Barsky, this school emphasized creativity over performance. Each child was encouraged to perform according to his or her abilities, rather than compete against other students. However, Chomsky continued his education outside of the classroom, reading many "realist" authors such as Dostoevsky, Eliot, Hardy, Hugo, Tolstoy, Turgenev, Twain, and Zola. At the age of ten, he wrote an editorial for the school paper, detailing the fall of Barcelona during the Spanish Civil War, which was taking place at this time. Chomsky began attending Central High School, also in Philadelphia, at the age of twelve. In the following years, his relatives exposed him to many left-leaning political philosophies, such as Leninism, Stalinism, socialism, Marxism, and anarcho-syndicalism. He also began to frequent the office of an anarchist newspaper, which promised to have a profound effect on his political philosophy. Many of his political views were formed at this time.

Chomsky enrolled at the University of Pennsylvania at the age of sixteen. He met several influential professors, such as C. West Churchman and Giorgio Levi Della Vida; however, the teacher who had the greatest influence on him was Zellig Harris, a professor of linguistics. Harris and Chomsky developed a close friendship, and Harris heavily influenced both Chomsky's view of grammar and his political views. At this time, the linguistics department consisted of a handful of graduate students and a few undergraduates, like Chomsky. They often avoided the classroom in favor of local restaurants or Harris' apartment. Grades were not the main focus of such meetings. Rather, the students gathered to discuss politics, language, and other intellectual topics. Chomsky, quoted by Barsky in Noam Chomsky, said that "'[Harris] had a coherent understanding of this whole range of issues, which I lacked, and I was immensely attracted by it.'" Chomsky also called him "'[A] person of unusual brilliance and originality.'"

Chomsky received his BA, but remained at the University of Pennsylvania as a graduate student. He was 20-years-old. The same year, in 1949, Chomsky married fellow student Carol Schatz, whom he had known since childhood. He continued an unorthodox education with Dr. Harris. In 1951, he was named a Junior Fellow at Harvard. During his research for Harvard, he developed an early draft of the theories he later presented in Syntactic Structures (1957). In 1955, Chomsky completed his doctoral thesis. Almost 1,000 pages long, Chomsky's thesis was the result of several months of almost complete isolation. Chomsky expresses amazement at his own efforts. "In looking back, I don't see how it was possible. In just a few months I wrote my book of close to 1,000 pages, and it had in it just about everything that I've done since, at least in a rough form." The University of Pennsylvania approved his PhD after having seen only the first chapter.

After graduating, a friend arranged a job for Chomsky at the Massachusetts Institute of Technology (MIT). Chomsky was assigned to work on a rote translation project as an assistant professor; however, he was soon hired as a full-time faculty member. Speaking of the translation project, Chomsky said, "It may have [had] some utility; it could be on par with building a bigger bulldozer, which is a useful thing. It's nice to have big bulldozers if you have to dig holes." Chomsky's new position required him to teach part-time. At first, he taught language classes for graduate students trying to pass PhD reading exams. However, he was also given free reign over an undergraduate course on language. For the first time, he was able to teach his ideas on grammar to students. This, in turn, helped him clarify parts of his work. His lecture notes for this class, with some editing, were published in 1957 under the title Syntactic Structure. Chomsky's theory directly challenged the basis of contemporary linguistics. Instead of trying to simplify individual languages and dialects to a set of rules, he set out to find a "universal grammar," that is, a set of rules that all languages have in common. Because this approach was very unorthodox, Chomsky's work received little attention at first. Barsky states that "Chomsky's Syntactic Structures diverged so radically from the standard opinion that it was not even mentioned in current reviews of American linguistics."

The Chomskys' first child was born in 1957. Chomsky's wife stayed home to raise their child, he continued his work at MIT. He was hired by the University of Pennsylvania to teach, and he was also appointed visiting professor at Columbia University. MIT also promoted him to the position of associate professor, and Princeton appointed him as a National Science Foundation fellow.

Meanwhile, spurred on by two important lectures, his linguistic work began to receive attention. He also criticized parts of noted psychologist B. F. Skinner's book Verbal Behavior. This sparked a decidedly negative response from many psychologists and proved to be only the first of many times that Chomsky was at the center of a controversy. During this period, Chomsky took part in founding a graduate program in linguistics at MIT. He was given the position of professor of foreign language and linguistics.

During the early 1960s, Chomsky's fame continued to soar, and he became the "de facto spokesperson for American linguistics." However, Chomsky was becoming more and more interested in current events, especially the Cuban Missile Crisis and, later, Vietnam. He began to teach several undergraduate humanities classes about social and political issues. Student protests came into vogue around this time, and Chomsky was popular with these dissatisfied students. However, he often critiqued efforts he thought were "misguided," which angered some students. A political article entitled "Responsibility of the Intellectuals," originally written by Chomsky for the student journal Mosaic, was published by the New York Review of Books. This article, and the ones following it, once again brought Chomsky into the public eye, this time as a political dissident.

Chomsky had a very successful career as a professor; he didn't have enough time and energy to keep up an active lifestyle as an academician and a political activist. He chose to scale back his academic research and focused on bringing attention to what he deemed social injustices. The culprit of most of these perceived social injustices and, therefore, the target of criticism, happened to be the US government. Chomsky quickly became an unpopular figure in Washington, DC.

As Chomsky began gearing up for a confrontation, Chomsky and his wife decided that she should finish her degree, so that, in the event that Noam was arrested, someone would be able to provide for their family. Meanwhile, Chomsky, having many long-standing friends who were radical liberals, quickly became involved in some of the more aggressive attempts at change. He was involved with a large-scale march to Washington, where the protesters delivered the draft cards of students who refused to serve. After this, they marched on to the Pentagon. However, at the Pentagon, the protesters were barred entrance, and instead milled around, trying to protest through other methods. Chomsky and other organizers were arrested. Chomsky expected to spend some time in prison. However, as he relates in Barsky's Noam Chomsky, he was spared by two events: the utter (and rather typical) incompetence of the intelligence services, which could not find the real organizers of resistance though it was transparent, and kept seeking hidden connections to North Korea, Cuba, or wherever, as well as mistaking people who agreed to appear at public events as "leaders" and "organizers;" and (2) the Tet Offensive, which convinced American business that to drop prosecutions.

During the 1970s, Chomsky continued his work in linguistics. This also marked a transition from direct involvement in political protests to academic involvement. In addition to his career work (notably the book Studies on Semantics in Generative Grammar [1980]), he gave the Bertrand Russell Memorial Lectures at Harvard and published the books Problems of Knowledge and Freedom (1971), At War With Asia (1970), and For Reasons of State (1973). These books address problems with American foreign policy, the economy, and the entire capitalism/democracy system.

As a professor, the number of students Noam Chomsky has interacted with is impressive. One estimate puts the number at over 67 PhDs alone. After 9/11, the actions of the government sat poorly with Chomsky, and he unleashed a barrage of criticism on both the foreign and domestic policies in print, interviews, and lectures. At the time of this writing, he continues to teach, lecture, and write on topics ranging from how kids acquire language to criticism of the Tia Maria Peru mining project. His influential linguistics book Aspects of the Theory of Syntax (1965) was rereleased in 2015 to celebrate its 50 years of continued relevance.