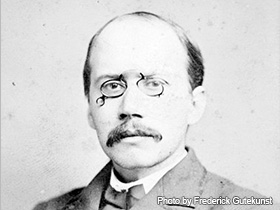 Charles Heber Clark was born in Berlin, Maryland, but moved to Philadelphia at a young age. He wrote many satirical novels and short stories, and was known as one of American's great literary humorists. He was also a great businessman, as he took part-ownership of magazines and journals. He died in Eagles Mere, Pennsylvania.

Charles Heber Clark was born on July 11, 1841, in Berlin, Maryland. His father was William J. Clark, a reverend of the Episcopal Church.

Clark dropped out of school when he was 15 and moved to Philadelphia where he did odd jobs at a commission house. He also served for two years in the Civil War with the Union Army. Later, Clark worked as a reporter, editor, and book reviewer for the Philadelphia Inquirer.

In 1874, Clark published his first humorous collection, Out of the Hurly Burly; or, Life in an Odd Corner (1874), which earned a gold medal from the Emperor of Austria-Hungary for its success. He published some works under the pen name Max Adeler including A Novel Without a Plot (1870), and Random Shots (1878). Clark did not publish any works between 1880 and 1901, a period during which he pursued business and trade. At this point in his life, he became a drama and music critic for and part owner of the Philadelphia Evening Bulletin, and owned half of the trade journal Textile Record. He began writing again in 1901 under his own name. His autobiography, A Family Memoir, was not published until 1995.

Charles Clark is recognized as one of America's great literary comedians. He died on August 10, 1915, in Eagles Mere, Pennsylvania.