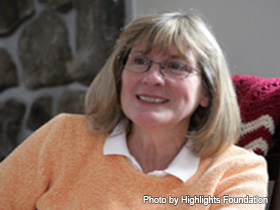 Clara Gillow Clark was born on a dairy farm in Lookout, northeastern Pennsylvania, and showed an interest in reading at an early age. She was inspired to enroll in writing courses after reading a magazine article featuring Judy Blume and published her first novel, Annie's Choice, in 1993. Clark draws on her family history to explore the limited options available to young women of past generations. In addition to writing, Clark enjoys outdoor activities and contributing to the professional children's literature associations of which she is a member.

Born on a dairy farm in Lookout, Pennsylvania, Clara Gillow Clark was exposed to literature and the arts early in life. Her parents, Lee and Naomi Gillow, both quoted long passages of poetry and were experienced musicians; Lee on the violin, and Naomi on the piano. Clark did not allow the scarcity of books in her home deter her from learning to read at an early age. She acquired every book she could with her limited financial means, quickly taking a liking to fairy tales such as Puss in Boots and Snow White. Clark began her schooling career in a one-room schoolhouse where, due to feeling left out of the popular crowd, she further cultivated her love for literature and music.

Clark was inspired by a magazine article featuring children's author Judy Blume, as noted in an interview with Candlewick Press. Like herself, Blume was a stay-at-home wife who sold handmade crafts before eventually beginning a career in writing. Shortly after reading this article, she began commuting to New York City to take writing classes while juggling various odd jobs and her obligations to her second husband H.W. Varrichio and son Jay. Clark draws on the history of her family and the Delaware River valley as inspiration for her books, primarily focusing on the limited options that were available to young women who lived in past eras.

Inspired by her mother's childhood experience of being denied the opportunity to attend high school, Clark released her first novel, Annie's Choice, in 1993. The story takes place in the 1920s on a farm where Annie lives with her parents and siblings. Annie's eighth grade teacher encourages her to attend high school, leaving her torn between furthering her education or continuing to help her parents with work on the family farm. The outcome of this decision is put to the test when Annie's mother becomes pregnant and she is needed at home, as Contemporary Authors Online noted in its profile of Clark. When Boyds Mills Press inquired about the personal significance of Annie's Choice, she explained, "As I wrote about Annie's life, I began to better understand my own, and to understand how I had ended up on the road leading to unfulfilled dreams. And as I wrote, again insight flashed—Annie's story was not only my mother's story, it was my own."

Recognition for her works came early in Clark's career, with Annie's Choice receiving the Lamplighter Award in 1995. This honor was created by Sandra Morrow, the librarian at Brentwood Christian School in Austin, Texas, to encourage children to become more discriminating readers and to persuade mainstream publishers to promote quality books that convey wholesome values. Parents, teachers, and librarians nominate deserving books with student surveys deciding the recipients of the award.

Historical situations continued to inspire Clark's writing throughout the 1990s and well into the early years of the new millennium. Hill Hawk Hattie, published in 2003, takes place in the late nineteenth century and exposes the way in which family issues can have enormous effects on a young person's well-being. Hattie leaves school to help her father, a New England logger, with household duties. She is initially troubled by the distance in their relationship and has trouble conveying these feelings to her father. The relationship improves when Hattie accompanies her father on a logging trip, despite the fact that he disguises her as a boy.

"I hope kids take away some comfort and strength from Hattie's story, an understanding that sometimes the people closest to us have a hard time saying in words 'I love you,'" says Clark in an interview with Candlewick Press. "I want kids to know that everybody has tough times, but the only way to get through them is to go on." Children face an ever-growing array of challenges to success in their young lives; Clark's novels provide an effective method for confronting the issues they face. When Hill Hawk Hattie was given the Kentucky Bluegrass Award in 2005, it joined a long line of well-known children's books, including Jumanji and The Polar Express, that had previous received this honor. This award was created in 1983 to expose Kentucky's students to excellent children's literature. Public and private schools, as well as the public library system, participate in the selection of books for this award.

Clark's children's novel, Hattie on Her Way, is the sequel to 2003's Hill Hawk Hattie. In this second installment, Hattie's father sends her to live with her grandmother in hopes that she will be able to receive a proper education. In a review for the School Library Journal, Barbara Auerbach observes that the months she spent dressed as a boy and working with her father imbued in Hattie an appearance and lifestyle in stark contrast to that of the prissy girls who lived in her new neighborhood. "Shortly after my father died we moved to a town that seemed cold and frightening at first," Clark says of her childhood in an interview with Candlewick Press. "I faced the challenge of being a tall misfit alongside petite girls who wore nice dresses and shiny shoes and knew the proper etiquette of birthday treats and valentines." Clark drew on personal experiences to write many of her novels. In 2009, Secrets of Greymoor, another book following the character of Hattie, was published.

As a member of the International Reading Association, Children's Literature Association, and the Society for Children's Book Writers & Illustrators, Clark shares her love of books with children throughout the world, while simultaneously encouraging high standards in the field of children's literature. She also serves on the Board of Trustees of the Wayne County Historical Society in Damascus, her current home at the time of this writing. When not writing, Clara Gillow Clark enjoys experimenting in the kitchen and walking through the forest that borders her home. "Walking," she says in an interview with Candlewick Press, "is a love I learned from my father, who took his sprawling brood on nature walks and taught us to stop long enough to really see things."