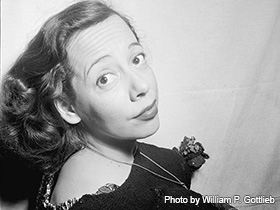 Comic actress Imogene Coca starred with Sid Caesar on the 1950s show Your Show of Shows.

Born November 18, 1908, in Philadelphia, Pennsylvania, Imogene Coca is one of the most famous women in the world of comedy. At a young age, Coca demonstrated a desire to perform, and began taking singing dancing lessons. Known for her pliable face and pixyish expressions, Coca reached the pinnacle of her career when she partnered with Sid Caesar on the comedic live show, Your Show of Shows. Throughout her life, she divided her work among Broadway performances, television performances, and films. She died on June 2, 2001, at the age of 92 in Westport, Connecticut.

Emogeane Coca was born on November 18, 1908, at 3009 North 11th Street in Philadelphia, Pennsylvania, to Joseph Fernandez y Coca, a violinist and orchestra conductor, and Sadie Brady, a magician's assistant and vaudeville performer. From a very young age, she was inspired and encouraged by her family to become a performer. She began piano lessons at the age of five, singing lessons at the age of six, and classical dance and ballet at the age of eight. In addition, her father always tried to book her for performances at the vaudeville houses where he was the orchestra leader. Four of her aunts and uncles were also performers.

At eleven years of age, Coca had her first job; she was paid $2 as a dancer. When she was thirteen, she made her vaudeville debut, singing, "O, by Gee, by Gosh, by Golly I'm in Love" at the Dixie Theater in Manayunk, Pennsylvania. She lived in Philadelphia until she was fifteen, the time at which her family decided to move to New York City.

In her new environment of New York City, Coca continued to perform. In 1923, she was performing in Jimmy Durante's Silver Slipper, a New York City nightclub. She made her Broadway debut in 1925 in the chorus line of When You Smile, which also starred Jeanette MacDonald. About this performance, Coca once said, "I was out to sing and dance like nobody's business." Throughout the 1930s, Coca performed her own acts in clubs such as New York City's famous Rainbow Room. However, at this time, she was still relatively unknown and struggled to find roles.

In 1934, Coca accidentally entered the world of comedy. The heat had failed in the theater in which she was to perform in a revue called New Faces of 1934. Because of the cold, she had borrowed a coat from another performer, Henry Fonda. In an effort to stay warm, she started jumping and dancing around in a mock strip-tease, while bundled tightly in the long wool overcoat. The director of the revue, Leonard Sillman saw her "performance" and then incorporated her bit into the show. The audience reacted, at first with silence; however, they soon burst into laughter, as Coca made her entrance into the world of comedy. Critics hailed her as a combination of Fanny Brice and Beatrice Lillie. She said, "It was pure accident. The first time I got laughs I was just scared, terrified. I don't try for effect consciously. I just try to be a good actress."

She then began performing in comedic roles in minor plays like Who's Who and Fools Rush In in 1935. It was on the set of Fools Rush In, where she met actor Robert Burton. They married on the last day of the show's run. Burton often arranged music for Coca's appearances and later became a record company executive. In 1939, she was a big hit in Straw Hat Review, as critics praised her for her "sly sense of comedy." Despite this success, she still faced much difficulty in finding Broadway roles and as a result, faced much financial instability.

She spent much of the 1930s and 1940s performing comedy clubs in the Catskills and Poconos. She also developed and perfected comic routines at Tamiment, a camp in the Catskills created by director Max Liebman. At Tamiment, she worked with up-and-coming actors such as Danny Kaye and Carol Channing.

In 1937, she made her film debut in a short film for Education Pictures about an unskilled ballet dancer. The New York Times described her as a "tiny fragile girl, suggesting a slightly undernourished squab, with even larger and sadder eyes than usual." She also appeared in the comedic film, Dime a Dance, as an average girl who works in a dance hall and with the help of a judo manual, gets a shy soldier to propose to her in marriage.

Then in the 1940s, producer Max Liebman contacted Coca. He wanted to pair her with another Tamiment alumnus, Sid Caesar, on the new entertainment medium, television. Caesar and Coca, at first meeting, hit it off; Caesar said, "I felt a certain chemistry between us. I called her 'Immie' and that's all I ever called her." The show was called Admiral's Broadway Revue, but it later became Your Show of Shows. It was a ninety-minute live performance show that included comedy sketches, song and dance numbers, and celebrity guests. The show first premiered in 1950 on NBC and it became of the most popular television programs of its time. Every week Caesar and Coca convincingly performed so many skits as husband and wife that the American public began believing that they were married in real life.

Consequently, Coca's work life became very hectic; Caesar joked, "Sunday was our day off. I'd stand under the shower and shake." But Coca's hard work paid off in 1951 when she earned an Emmy for Best Actress. It was her malleable face and pixyish mannerisms that kept the audiences entertained. She could mime, do slapstick comedy, or perform dramatic scenes; her versatility shined in this innovative show.

However, in 1954, during the fourth season for Your Show of Shows, reviewers started criticizing the show saying it was no longer novel and imaginative. NBC decided that Liebman, Coca, and Caesar split and continue their careers individually. Coca was heartbroken; "I made a fool of myself, crying and carrying on," she said later. She referred to this period of time as "the most fulfilling time of [her] life."

It was her work on this show that inspired many future comediennes like Lily Tomlin, Whoopi Goldberg, and Tracey Ullman. Also, Your Show of Shows has remained a comedy that has withstood the test of time; it is still funny today.

After Your Show of Shows, she had her own variety show called, The Imogene Coca Show, but it only lasted for a season. In 1955, Coca faced a difficult year. Her husband died on June 17, and within a few weeks, her mother died as well. As she struggled to pay off the medical bills, the IRS was after her too. Under this overwhelming pressure, Coca wanted to escape to a vacation in Cape Cod, but was forced to work.

Upon returning to work, she soon became a popular television guest star, appearing on various shows such as Bewitched, Moonlighting, Playhouse 90, and One Life to Live. She and Sid Caesar reunited on Sid Caesar Invites You, but it lacked the same level of fame and magic that Your Show of Shows had. She and Sid Caesar teamed up again in 1967 in the Emmy Award winning, Sid Caesar, Imogene Coca, Carl Reiner, and Howard Morris Show and in 1991 in a nationwide theater tour for the show entitled, Together Again.

In 1960, while she was on the road for a summer theater tour, she met and married actor King Donovan. They often performed together in variety shows and touring theater companies. After which, she had various roles in movies such as Grindle, Under the Yum Yum Tree and also in many television movies, like The Incredible Incident at Independence Square, which was filmed in her hometown of Philadelphia.

On New Year's Eve in 1973, Donovan and Coca were driving near Tampa, Florida, when Donovan accidentally ran a red light, which resulted in a crash that badly injured Coca. She underwent extensive facial surgery, but nothing could prevent the loss of sight in her right eye.

In 1978, she was nominated for a Tony Award for her performance in On the Twentieth Century, in which she played a religious fanatic. She also continued in that role on a national tour of the show. She continued acting in movies throughout the 1980s, like National Lampoon's Vacation with actor, Chevy Chase.

Apart from performing, she spent the rest of her time in Manhattan and Connecticut with husband King Donovan until his death in 1987. She was an animal lover; her pets included a crippled duck that she had rescued. It was her love of animals that prompted her to found the Imogene Coca Charitable Foundation, which donates its proceeds to the Humane Society and other human and civil rights groups.

Imogene Coca died of natural causes in her home in Westport, Connecticut on June 2, 2001, at the age of 92. She requested that there be no funeral service for her death.