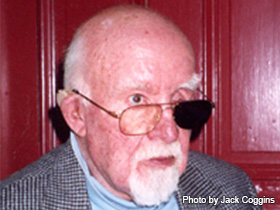 Born in 1911 in England, Jack Coggins served as an artist correspondent with Life, PM, and Yank publications during World War II. He later authored technical and historical books, as well as illustrative contributions to science fiction and children's works. Coggins also produced over 500 oil paintings in his life, and many of his visual and textual works explored maritime themes. He passed away in 2006 at his home in Boyertown, Pennsylvania.

Jack Banham Coggins was born in 1911 in London, England, to Sidney George Coggins, a career British Army soldier and the Riding Master of the Life Guards' first regiment, and mother May (Dobby) Coggins. When cuts in military expenditures forced his father out of the service, Coggins and his family moved to Long Island, New York in 1923. Coggins studied at the Grand Central School of Art and the Art Students League from 1931 to 1934. He became a freelance artist thereafter and created illustrations for magazines and advertisements.

Early in World War II, Coggins received commissions from the War Department to compose training illustrations as well as other artistic works for Life magazine and the newspaper PM. Coggins joined the US Army in April 1943. An editor who admired Coggins' illustrative work pulled him from basic training and offered him a position as an artist correspondent for Yank magazine. With Yank, Coggins served in New York and Europe until the end of the war, and he was embedded with troops in Normandy, France, shortly after D-Day. After the war, from 1948 to 1953, he served as an assistant instructor of art atthe Hunter College of the City University of New York (formerly Hunter College). In January 1948, he married Alma Woods, an artist and research assistant of Coggins. In 1953, they settled in Berks County, Pennsylvania, when Coggins began painting and illustrating commercially. He also taught his wife Alma to paint. The couple had their first joint art exposition in 1973 and continued painting together for many years. For 45 years, Coggins taught art at the Wyomissing Institute of the Arts in Wyomissing, Pennsylvania, retiring in May 2001.

Throughout the 1950s, Coggins illustrated covers for science fiction magazines like Galaxy and Fantasy & Science Fiction. He collaborated with Fletcher Plattin and produced two books, Rockets, Jets Guided Missiles and Space Ships (1951) and By Space Ship to the Moon (1952). These works emerged amidst a growing public interest in space travel, which their popularity reflected. In the 1960s, Coggins began writing and painting for various marine, military, and historical books. His 1966 work A Horseman's Bible, wherein Coggins acknowledges his own father's equestrian interests, sold over half a million copies. The Fighting Man (1966), a history of individual soldiers in warfare, was "stocked with information, highly readable, delightfully illustrated and basically sound as to facts and lessons...realistic and spirited..." wrote critic Frederick P. Todd. In Ships and Seamen of the American Revolution (1969), Malcolm Lester writes that Coggins "re-creates the ships and seamen of the period by graphic word pictures" and "is able by means of beautiful and clear drawings and sketches to make intelligible the building, design, and repair of warships as well as the intricacy of rigging, signals, tactics, and ordinance."

Coggins explained this movement from illustrator to author, explaining to Something About the Author that "...illustrating was only half the fun of a book." He maintains the importance of authoring his own books: "I can be sure I have a subject that interests me, and also that the text will include material that is suitable for illustrations. Adults, as well as young people, like pictures, especially if they are designed to explain the text." He says that this control over his projects is essential: "I lay my books out myself, being careful that whenever possible picture and text run together." His naval, military, and mechanical interests "provide a never-ending source of subject matter." Coggins admits he is fortunate to have a wife like Alma , who is a house caretaker and well as a researcher, typist, copy reader, and layout artist.

Jack Coggins was also a member of the US Naval Institute and the American Ordinance Association. He even served as an advisory member of the Philadelphia Maritime Museum and the Reading Public Museum. He received various accolades throughout his career as a painter, illustrator, and author of technical and industrial subjects: the American Revolution Round Table Award in 1969 for his work Ships and Seamen of the American Revolution, the Americanism Award from the Daniel Boone National Foundation in 1985, the Purchase Award from the Mystic Maritime Gallery in 1989, the Rudolph Shaeffer Award in the International Maritime Exhibition from 1987 to 1990, the Pagoda Award from the Berks Art Council 1995, and the Revolution Round Table Award. In 2000, he was inducted to the International Association of Astronomical Artists Hall of Fame.

At the age of 94, Jack Coggins died at his home in Boyertown, Pennsylvania, on January 30, 2006. His many paintings are on display in the Philadelphia Maritime Museum, the National Air and Space Museum, the Reading Public Museum, the US Navy and Coast Guard institutions, and in various public buildings and private collections.