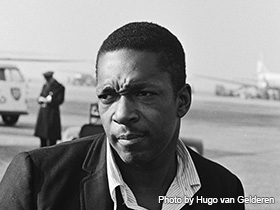 John Coltrane reshaped modern jazz. Born in North Carolina on September 23, 1926, he moved to Philadelphia following his high school graduation in 1943, where he spent many years developing his musical style. Coltrane became known as "The Train" while playing in rhythm-and-blues groups during the 1940s and 1950s and with bebop jazz musicians such as Dizzy Gillespie, Earl Bostic, and Johnny Hodge. During what is referred to as Coltrane's "real career," between 1955 and 1967, he composed music that revolutionized jazz. In 1964 he created his signature album, A Love Supreme. Coltrane died in 1967 in Huntington, New York.

John Coltrane was born on September 23, 1926, in Hamlet, North Carolina, an only child of Alice and John Coltrane, Sr. Coltrane was exposed to music at an early age; his father played a variety of stringed instruments and his mother played the piano. After Coltrane's father passed away in 1939, the 13-year-old focused on the alto saxophone, an instrument he had taken up shortly before. Since Coltrane dealt with the loss of his father through his music, playing became his source for spiritual comfort and was his inspiration for a virtuous lifestyle from that point on. After finishing high school in 1943, Coltrane moved to Philadelphia. While his friends attended college, Coltrane worked odd jobs and took saxophone lessons. In Philadelphia, he was exposed to many musical influences: the first signs of rhythm and blues were appearing and the "bebop" sound was being developed by Charlie Parker and Dizzy Gillespie. Because there was a shortage of jobs in New York at this time, Philadelphia became the home for many talented musicians. Coltrane spent many years cultivating his musical abilities and style while living among these musicians; thus his time in Philadelphia was extremely important for his musical education. Coltrane was drafted by the Navy in 1945. After spending a year stationed in Hawaii, Coltrane decided to pursue the musical profession.

From 1946-1955, Coltrane experimented in jazz, blues, R&B, and even picked up the tenor saxophone. From 1949-1950 he played with Dizzy Gillespie's big band, with his small ensemble (1951), with Earl Bostic's band (1952), and Johnny Hodge's small group (1953-1954). In October of 1955, Coltrane wed Juanita Austin, "Naima," also a North Carolina native. Later that year, Coltrane joined the Miles Davis Quintet, the group in which his skill as a musician really emerged and the platform from which he began to revolutionize jazz.

Coltrane and Davis worked on a style called "modal jazz," which influenced Coltrane's music for the rest of his career. "Modal playing" consists of improvisation based on modes rather than chords, meaning that musicians are given more freedom and are able to play a greater variety of notes, given that they remain within a certain scale. In 1957, Coltrane worked with the piano player Thelonius Monk. Under Monk's guidance, Coltrane experimented with the pianist's more challenging and unconventional compositions. He also played frequently at Manhattan's Five Spot and participated in a number of studio sessions for Prestige and Blue Note Records, one of which produced his album Blue Train (1957). However, in 1958, with the end of his contract with Prestige, Coltrane moved to Atlantic Records.

Coltrane's next major album was recorded in 1959: Giant Steps, a showcase for his unfolding creativity. Soon after the release of this album, Coltrane found new inspiration in Ornette Coleman's improvisational jazz style. In 1960, he also ended his musical alliance with Davis and started to work on his own, a step that led to the production of his signature album, A Love Supreme (1964).

As he began to work with his own quartet, Coltrane used the soprano saxophone, which allowed him to experiment with the Islamic and African music with which he was so intrigued. His modal style influenced his 1960 recording of "My Favorite Things" from The Sound of Music, which became a hit record for Atlantic. Coltrane signed with Impulse Records in 1961; his first album for the company was Africa/Brass (1961). By 1962, Coltrane had established the quartet that best-suited his musical style with pianist McCoy Tyner, bassist Jimmy Garrison, and drummer Elvin Jones. However, Coltrane's new found success as a musician placed new strains on his marriage to Naima, and in 1966 the pair split up.

In 1964, while dating his wife-to-be Alice McLeod, Coltrane began to use poetry as well as music as a means of expression. In fact, his poems were sometimes involved in his compositions because he was able to create music influenced by the rhythm and flow of poetic language. Literary influences are very apparent in A Love Supreme, for which he wrote poems corresponding to the different sections of the album. The recording displays the renewal of the spirituality he experienced early in his life. Although Coltrane would release two more albums, Meditation and Ascension, A Love Supreme is considered his crowning achievement and his greatest legacy.

By 1966 Coltrane's quartet had disbanded. For the remainder of his life, he worked with his wife, Alice, and drummer Rashied Ali. Coltrane died suddenly of liver cancer on July 17, 1967, in Huntington, New York. In the years following his death, a number of Coltrane's previously unreleased recordings were finally issued. These included "Live" at the Village Vanguard Again! (1967), Om (1967), Cosmic Music (1968), Selflessness (1969), Transition (1969), and First Meditations (For Quartet) (1977). In 2004, his wife, Alice Coltrane, released Translinear Light.